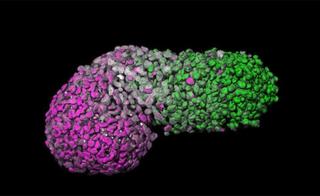 Remember human embryonic stem (hES) cells? We don't hear much about them anymore. So I was surprised to see an application of the controversial cells to grow human embryo-like structures in a recent issue of Nature.

Human embryonic stem cells are not, and have never been, taken from human embryos. Instead, they're grown in laboratory glassware from cells that are sampled from the inner cell mass. The "icm" is the stage when the prenatal human is a smear of cells hugging the interior of a hollow ball of cells, the blastocyst. The icm expands and contorts, layering itself into embryohood, as the blastocyst gives rise to the nurturing extra-embryonic membranes.