A Closer Genetic Look at the Quagga, an Extinct Zebra 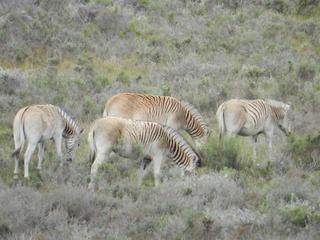 Like the dodo bird, heath hen, and woolly mammoth, the quagga vanished so recently that glimpsing its evolution is possible, using DNA from museum specimens and breeding modern relatives to select individuals bearing ancestral traits.

Named and described in 1788, a quagga looks like someone took an eraser to the rear end and hind legs of a zebra, brushing away the telltale stripes. Charles Darwin deemed the quagga a separate species, but today Equus quagga quagga is considered an extinct subspecies of the plains zebra. The living five subspecies roam south and eastern Africa, while the other zebra species, mountain and Grevy, live in more limited areas. When I visited Cape Town a few years ago, I was amazed to see zebras standing in ordinary backyards, like deer appear here. Read More
Be the first to comment