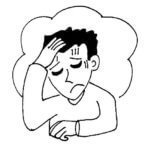 Finding an antidepressant that works can be an agonizing personal hell of trying one drug after another. Months, even years, may pass without relief, as they did for my father.

A study from 2016 reported that nearly two-thirds of people being treated for major depressive disorder either do not respond to the first drug tried, or suffer unacceptable side effects. Of those that move on to drug #2, three-quarters don’t respond. Each audition lasts at least 4 weeks, with sometimes extended washout periods in between to detox and switch. Read More
Be the first to comment