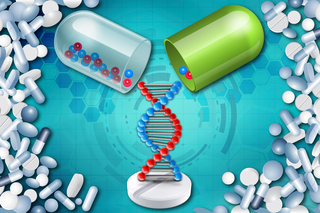 (NHGRI)
On a spectacular September Sunday in 2008, 8-year-old Corey Haas, using his cane and holding his mother’s hand, stepped tentatively forward on the pathway leading into the Philadelphia zoo. Hearing kids yelling about the giant balloon hanging above the zoo, he looked up – and screamed. It was the first time he’d seen the sun. Corey was headed toward certain blindness when he’d had gene therapy at Children’s Hospital of Philadelphia, just days earlier.

So begins the talk I’ve given many times since publication of my book, "The Forever Fix: Gene Therapy and the Boy Who Saved It.

Last Thursday, I was glued to my laptop, watching and listening to physicians, researchers, family, and patients present their cases for FDA approval of
Luxturna (voretigene neparvovec), the gene therapy that Corey, now a high school senior, received. He and dozens of others participating in several clinical trials can now see, thanks to the gene therapy for RPE65-mediated inherited retinal dystrophy. The treatment introduces functioning genes into the thin layer of pigmented cells that hugs the rods and cones – one time. Read More
Be the first to comment