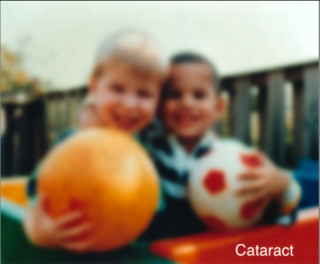 I've just had cataract surgeries, so I wasn't thrilled to find a new report in the Proceedings of the National Academy of Sciences comparing the protein glitch behind them to the one behind Alzheimer's. Fortunately the similarity is only in how the proteins fold.

The amyloid beta buildup of cataracts could be an early marker that might eventually allow drug treatment to replace surgery. Too late for me, but that could be great news for the more than 18 million people worldwide  blinded by cataracts because they can't get surgery.

Cataracts develop as proteins coalesce in the lens, triggering spreading of patches of blurriness. They are the leading cause of blindness globally and affect half of people over age 50. My fellow PLOS blogger Hilda Bastian recently recounted the compelling story of the origin of cataract surgery.

A human lens is fascinating, in terms of biochemistry, cell biology, and evolution.

To continue reading go to my DNA Science DNA Science blog at Public Library of Science, where this post first appeared.