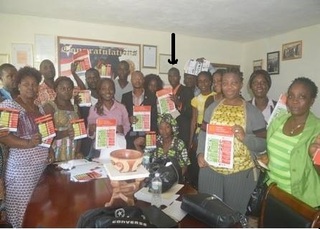 This post picks up in early October, when Ebola suddenly jumped from a topic rarely reported in the U.S. ,to major news when it arrived here.

OCTOBER 3
RL: Eman, what is your reaction to the belated response among many in the US?

EG: I read some comments on CNN about the outbreak in Africa, and it was disgusting. I didn't believe humans could be so unsympathetic. I earmarked a few:

"Africans are uncivilized, so they always get infected by some sh..t."

"Stop those barbarians from coming to America immediately."

"Why is our government spending our taxes on those c _ nts?" and so forth.

I’m not happy that it’s in the US, but I'm sure it will change some perceptions.

OCTOBER 12
RL: In the US infected patients are isolated and given supportive care immediately. What is the situation in Liberia?

EG: Considering our traditional practices of bathing the dead at home, monkey and bushmeat as delicacies, our weak healthcare system and day-to-day interactions, I always thought this virus could spread at an incredible rate. Not enough has been done to curb the spread. Hundreds of homes do not even have buckets for washing hands. In fact, the health systems have not been reinforced to deal with seasonal diseases like diarrhea and cholera and this has led to many deaths.

Our own governments are at fault too! Imagine, our government set up an Ebola response team without a medical practitioner on board; not even a medical student. Isn’t that absurd?! Others have made it a money-eating (corruption) show; $100,000 USD meant for tracking cases gets missing and even donated buckets get sold. America alone is not to blame.

(RL: It is our sending funds that enabled Eman to be currently hospitalized.)

OCTOBER 18
RL: Tell us how you are using your medical and communication skills.

EG: I have been busy with Ebola workshops this week. I chair a youth organization called "Determined Youth for Progress" that has been working a lot sensitizing communities about Ebola prevention. We luckily got a grant to carry out more sensitizing and buy more buckets and chlorine (bleach) for distribution.

We will also be doing virus contact tracing (people will be tasked with identifying people who may have come into contact with sufferers). We will also be sending out short text messages every morning to tell family and friends about the virus:

“Dear friend,
You have received this text because I'm well. I'm well because I follow the rules. Please do the same: wash your hands regularly, do not touch sick people rather, report them to health authorities by calling 4455.”

We also want to look into tutoring kids at their homes because schools are closed, and creating awareness messages through short poems.

Getting funding is always difficult, but our volunteers have been great! Tomorrow, we carry out a big community clean-up. We’re on Facebook: Determined Youth for Progress. (One post: “Ebola is everybody's business. Let's spread the message.”)

OCTOBER 21
RL: How do you feel about exposed individuals in the U.S. using public transportation?

EG: People should know how dangerous the virus is. Allowing infected persons to be in crowded places, on cruise ships, or in planes poses greater risk to others.

I believe we can win the fight against Ebola from the level of community involvement. Everyone must cooperate in some way to win this fight, especially in listening to the experts.

NOVEMBER 2
RL: Is the epidemic abating?

EG: There are signs that progress is being made in battling the epidemic, but we have been telling people to stick with the rules, so avoid newer cases. For example, I was in Bomi County yesterday and found out that there were seven cases handled for a week with nothing new coming. The number of cases per week is gradually reducing and we remain hopeful that we can turn the tide in a few months.

RL: The New York Times reported that fewer Ebola cases are in hospitals. What does this mean?

EG: Most hospitals are closed. This has made the situation even more difficult. There are cases where people died because of no access to hospitals. This in part is due to the shortage of PPEs (Personal Protective Equipment). Health workers are afraid to treat even the simplest of conditions due to this. All cases are being handled by the ETU (Ebola Treatment Units).

RL: How is your community work progressing?

EG: I have been busy with the community organization I chair (Determined Youth for Progress), organizing Ebola awareness workshops, sensitizing rural communities on the prevention and spread of the virus, and working with bigger organizations like the Gbowee Peace Foundation Africa to get a grant for our projects. It's been really challenging, but we are making progress. We have been able to reach a lot of rural communities and the reports we get from there show that we made an impact.

RL: Quarantine is a highly contentious issue in the U.S. Do you think it is necessary?

EG: It's sad that people returning from Africa think they are being stigmatized by being quarantined. I think the intention is to avoid another outbreak. Well, like I said, it's a little sticky for me to discuss because someone might say Africans don't know what civil liberty really is because most often, our leaders seize them. lol.

If it is in any way stopping people from volunteering to curb the outbreak, they should consider doing the quarantine in the country where the person worked before coming to the U.S. That is, if Mr. X worked in Guinea and decided to go back, he should be quarantined in Guinea before going back to the US. Health workers must also understand that it is for the safety of their family and friends that they have been subjected to such methods. As harsh as it might seem, if nothing of such is done, they might pose a threat to others.

RL: What have you learned from the current Ebola situation?

EG: Basically, the epidemic has exposed our weak healthcare systems and taught us how dangerous it is to underestimate disease outbreaks. Ebola has been much more devastating compared to other outbreaks like cholera, malaria and typhoid in such a short period of time. It has broken families and held countries under siege. The world needs to take this as an example and be on the alert.

(This post is updated from PLOS blog DNA Science.