When a Disease is Genetic but not Inherited: Bea Rienhoff's Story 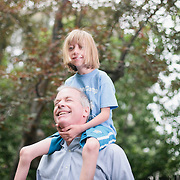 Hugh and Bea Rienhoff (credit: Leah Fasten)
Genetics is the study of genes, DNA, and variation; heredity is the passing of inherited traits from parents to offspring. Families with one member, typically a child, who has a collection of unusual symptoms that don’t fit any clinical diagnosis may in fact have a genetic disease – but one that arose spontaneously in the child, rather than having been inherited from carrier parents.

Exome sequencing is helping to solve these genetics-but-not-heredity mysteries. The story of one little girl and her father’s efforts to find her mutant gene, and how the tale wove in and out and now back into my human genetics textbook, illustrates the evolution of personalized genomic medicine.

THE BEA PROJECT
When Hugh Rienhoff first saw his daughter Bea, born in December 2003, he knew something was wrong. Her long feet, clenched fingers, poor muscle tone, widely-spaced hazel eyes, and a facial birthmark might have been just peculiarities to anyone who wasn’t also a physician and a geneticist.

As she grew into toddlerhood, Bea’s slow weight gain and bird-like legs reminded her father of Marfan syndrome. A little later, her divided uvula, the thing that hangs down in the throat, echoed the related Loeys-Dietz syndrome, both disorders of connective tissue.

When Bea’s diagnosis remained elusive, Dr. Rienhoff bought secondhand DNA sequencing equipment, hired a lab to sample his daughter's blood, and got to work in his home. “It was eerie examining her DNA, as though I were peering through a powerful microscope looking deep into my daughter while she patiently lay on the microscope stage, looking up, hoping for answers,” he said. But he isn’t the average citizen-scientist – he’s a researcher at Children’s Hospital Oakland Research Institute in San Francisco.

Bea’s journey to a diagnosis in what would be dubbed The Bea Project chronicles human genomics in the 21rst century. First Dr. Rienhoff probed variants of the genes behind the suspect Marfan and Loeys-Dietz syndromes, and a few others. When Bea didn’t have "atypical presentations" of those diseases, her father looked at genes that she expressed but that the other family members didn’t -- the transcriptome of mRNAs. A few leads didn't pan out.

REWRITING THE TEXTBOOKS
When I read Brendan Maher’s compelling article in Nature in fall 2007 about the Rienhoffs, while I was writing the 9th edition of my textbook, I thought their story would make a great intro for chapter 4, Mendelian Genetics. I too thought she had a genetic condition, likely inherited from carrier parents.

Chapter 4 opened with the story of the father seeking his daughter’s DNA. The book has lots of true tales of parents helping kids with genetic diseases, but the Rienhoffs were different, among the first, if not the first, to practice what's now called do-it-yourself genetics.

(An aside here on textbooks. We authors actually do update new editions. I receive many reviews for each chapter, from instructors, and I rewrite extensively. Like evolution, the chapters go through many iterations, as I jettison what’s outdated or unclear, and keep what works, always updating, in a pedagogical survival of the fittest. Yes, the cost to the consumer is outrageous, but I have nothing to do with that, and rented and used books take my tiny royalty share. I wrote a short, inexpensive human genetics book as an alternative, but it was pirated and posted, by a company that does this routinely hoping authors won't use Google Alerts. So it goes.)

Back to Bea. Some reviewers of the 9th edition of my textbook, as enchanted as they were by the story, requested I remove it. The reason: as the only one in her family with the strange symptoms, her condition might not have been inherited, and therefore wasn’t a good introduction to a chapter on single-gene (Mendelian) inheritance.

I reluctantly concurred. Out went the essay on Bea and her father’s quest to find a DNA sequence that could explain her odd collection of symptoms. Every few months I’d google them to see what progress they’d made.

THE POWER OF EXOME SEQUENCING
After comparing transcriptomes (expressed genes) didn’t reveal Bea’s difference from her parents and brothers, Dr. Rienhoff turned to whole exome sequencing, with the help of Illumina. Beginning with the famous case of young Nicholas Volker in 2008 and his intestinal disease that turned out to be an immune system dysfunction, exome sequencing has provided diagnoses for a growing number of families in which a child’s symptoms don’t match a clinically recognized condition, nor are the parents carriers for a known inherited disease.

Exome studies compare the protein-encoding parts of the genome among all members of a family, seeking something that can explain the symptoms of the affected relative. Such mutations must be “non-synonymous,” which means that the protein’s amino acid sequence is altered, not just the DNA sequence. The genetic code (the correspondence between gene and protein, not to be confused with DNA or genome sequence, which it often is) includes redundant DNA triplets (codons) that encode the same amino acid, such as CTC, CTG, CTA and CTT all encoding leucine. These are “synonymous” codons because a mutation from one to another won’t change the protein, and therefore can’t affect the trait – it’s “silent.” A CTC mutated to a CTT still tells the cell to stick a leucine into the protein.

In the case of Nicholas Volker, the family’s exome sequencing found the causative mutation on his mother’s X chromosome -- X-linked inheritance. The most common situation is to detect a mutation that both parents carry – autosomal recessive inheritance. The Rienhoff family had the third mode of inheritance – autosomal dominant. Textbookese. Can't help it.

BEA'S MUTATION
Exome sequencing revealed that Bea’s condition is indeed genetic, but she didn’t inherit it. She originated it. Bea Rienhoff, like all of us, harbors a handful of spontaneous “de novo” mutations that bloomed into existence, perhaps by slipping DNA replication enzymes, in her mother’s egg or her father’s sperm.

Brendan Maher follows up this chapter of Bea’s journey – finding her mutation -- in a recent Nature article, and a technical account from Dr. Rienhoff and his colleagues will appear in the American Journal of Medical Genetics.

The mutation lies in the transforming growth factor-beta 3 gene, which is indeed related to the pathways affected in Marfan and Loeys-Dietz syndromes, as Dr. Rienhoff suspected. A single-base change in Bea’s gene -- a guanine replaced with adenine at position 1226 -- replaces a cysteine with a tyrosine in the amino acid sequence.

Hugh Rienhoff and his wife Lisa Hane aren’t carriers, and their daughter’s mutation is dominant. Should she have children, each will face a 50:50 chance of inheriting what may become known as Rienhoff syndrome.

Bea’s condition – she’s still the only one known to have it, and I wouldn't exactly call it a disease -- has three defining characteristics: low muscle mass, growth retardation, and bent hands and feet. Her cells don’t make enough of the encoded growth factor, and the effects were set into motion when she was an embryo and her cells were sorting themselves into tissues and organs, particularly her muscles.

Dr. Rienhoff’s deepest concern, that his daughter’s condition would include the weakened cardiac blood vessels prone to balloon, and burst, as they do in Marfan syndrome, happily hasn’t happened and likely won't. Bea is in many ways a normal and happy little girl, if small. And she's a symbol of the new power of personalized genomic medicine.

This blog first appeared at http://blogs.plos.org/dnascience/ on July 4.

Wow -- Hugh and Lisa, I think that it is courageous and also a role model to other parents, what you did for Bea. I am a medical journalist and alum of your college. Williams where I first took a genetics class and worked with Larry Vankin. As it happens, genetics comes into all our lives, when a parent dies or a child is born. How would you advise genetic counselors now?

Address about what? See current entry about expanded genetic testing. We'll need many more genetic counselors. Thanks for writing.