The Crud: Viral or Bacterial? 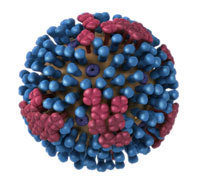 A flu virus. (Credit: CDC)
My immune system is still on hyperdrive from what may have been the flu three weeks ago. I qualify my self-diagnosis because I never had a test to tell whether viruses or bacteria had invaded my body.

I’ve long wondered why such diagnostics aren’t, by now, in routine use. Molecular biology was pioneered on the genetic details of bacteria and their viruses in the 1970s, and by now most of our pathogens have had their genomes sequenced.

A quick, easy, and early way to distinguish viral from bacterial infections would have enormous impact, by:
• getting antibiotics and antivirals to those who truly need them.
• limiting spread by diagnosing people at the first ominous throat tickle or drip – or even before.
• revealing new strains of flu or epidemiological trends.

In two recent articles in PLOS One, researchers describe powerful gene expression signatures that distinguish viral and bacterial infections. Unlike traditional diagnostic tests that requiring culturing the pathogens, taking days, the new genome-based tests highlight the response of the host – us. I can tell this is important news because the list of pharmaceutical companies the authors, most of whom are from Duke University, are affiliated with or supported by is almost as long as the papers.

The great effect that infectious diseases still have on us is clear from the individual to the population levels. Last summer, a New York Times headline alone told the tragic tale: “An infection, unnoticed, turns unstoppable.” The article chronicles the rapid and unnecessary death of twelve-year-old Rory Staunton at the NYU Langone Medical Center, due to miscommunication and failure to recognize a bacterial infection. And take a look at this map to see the spread of the current flu.

WAYS TO DO IT
Despite the tendency of the Today show to discuss bacteria while showing graphics of viruses, the two are quite different. Bacteria, for example are cells and are alive; viruses are neither. So telling them apart should be straightforward, and in fact several ways to do so are already out there.

1. An antibody-based rapid test detects a carbohydrate from Streptococcus pyogenes, the bacterium behind a strep throat, impetigo, and scarlet fever. It killed Muppet inventor Jim Henson, as well as young Rory Staunton. The test takes just a few minutes, but because it isn’t as accurate as culturing, the American Academy of Pediatrics, the American Heart Association, and the Infectious Disease Society of America recommend backup throat cultures.

2. The BACcel system A from Accelerate Diagnostics uses automated microscopy and computerized image analysis to eyeball pathogens, providing diagnosis in 2 hours and antibiotic resistance analysis in 6 hours. The technology was developed for wound and trauma-related infections on the battlefield.

3. Researchers at Ben-Gurion University of the Negev developed a test that generates different bioluminescence patterns from white blood cells exposed to bacteria or viruses. It uses luminol, the stuff that Law and Order uses to highlight blood at crime scenes. Like the approaches introduced in PLOS One, this assay follows response of the host, rather than evidence from the pathogen.

4. The BC-GP test from Nanosphere Inc. highlights genes that encode antibiotic resistance in a dozen species of strep, staph, enterococcus, and listeria, which account for 65% of bloodstream infections. It’s FDA approved and can check blood cultures in 2.5 hours. Antibiotic resistance genes flit around on mobile elements from bacterium to bacterium, like starships wandering among the planets of a solar system.

6. Speaking of snot, the Nasal Microbiome Project is looking for microbial DNA clues that flu will progress to secondary bacterial pneumonia. The project is from the
Genomic Sequencing Center for Infectious Diseases at the J. Craig Venter Institute, which is looking at DNA from everywhere in the universe, including, now, stuffed nasal passages.

TRACKING THE HOST, NOT THE PATHOGEN
The new approaches described in the PLOS One articles combine the specificity of a genetic approach with a computational tool to sort through the responses of thousands of genes. The tool, called a Bayesian sparse factor model, zeroes in on genes whose expression varies a lot in exposed/infected vs nonexposed people. The math also aggregates genes that partake of the same biochemical pathways, which can compensate for the fact that the importance of a gene is not necessarily directly correlated to the associated protein’s abundance.

In the bacterial paper, the researchers derived a “molecular classifier” to detect S. aureus in mice, and used it to guide development of a similar tool for people. “Factor analysis” boiled down data from 9,109 expressed genes to 79 factors, which proved sufficient to distinguish S. aureus infection from E. coli infection from no infection. It also could distinguish MRSA from methicillin-sensitive S. aureus (MSSA).

The viral study looked at gene expression in 24 healthy young people who volunteered to have H1N1 influenza A squirted up their noses and 17 who got H3N2. This happened at a “purpose-built quarantine clinic” in London affiliated with Retroscreen Virology, Ltd, which recently announced infecting its 1,000th volunteer in their quest to develop antivirals.

The volunteers gave blood thrice daily for a week, from which the researchers teased out the telltale mRNAs reflecting genes expressed in response to the viral challenge. The usual suspects emerged, such as downstream targets of interferon. Because snorting flu virus in a lab is not exactly a normal situation, the researchers validated the test on blood samples taken from emergency department patients with H1N1 in 2009, along with blinded controls.

The researchers learned, observing the volunteers, that flu symptoms appear one to three days after infection. That’s a lot of time for a person to feel okay but be spewing viruses with every exhalation. The gene expression signature that viruses have taken up residence appears a little over a day after infection. So someone sneezed on at work can have the test and find out that flu looms soon enough to stay home and halt the spread. That’s what’s been needed for years.

“A test that could identify individuals exposed to the flu before the onset of symptoms would be an important and useful tool for guiding treatment decisions, especially with limited antiviral medications,” said Dr. Woods.

Added Dr. Ginsburg, “These studies demonstrate that analysis of genomic factors show promise for early detection and accurately diagnosing the flu and staph.” The team is working now on how best to take the tests to the average person – like me, three weeks ago.
Be the first to comment