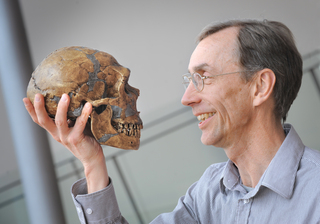 Today, thanks to new technology that unravels and amplifies fragmented ancient DNA, the researchers report in Science a much more complete view of the finger lady’s genome (thanks to two molars). “We’ve determined the genome sequence from this little finger bone to a quality like what we’d determine for a person today. Every position in the genome has been sequenced on average 30 times over,” said Dr. Pääbo at a news teleconference. And in her genome, the researchers say, lie clues to how we came to be the only people on the planet.

I’ve often thought about the times when hominids (ancestors of humans only, and not the other apes) of different species co-existed, such as two or more types of australopithecines, or when they and the first Homo lived. Groups interbred and populations coalesced as archaic peoples began to move about, so that today, the genomes of those of us who live outside Africa include some DNA sequences shared with Neandertals, a side branch that died out, as well as with the extinct Denisovans. Pääbo and others consider them archaic Homo sapiens, but some researchers deem them separate species.

The Denisovan woman lived from 32,000 to 50,000 years ago, according to both fossil and DNA evidence. The estimate is broad because the mutation rates on which DNA clocks are based may vary for different genes. Also unclear is the timing of the split that led to the three sister groups – Neandertals, Denisovans, and us. That happened before 700,000 years ago.

The genome sequence reveals a few things about the ancient “Denise.” She had dark skin and brown eyes and hair, and bits of her genome survive today in people from Papau New Guinea and in some aboriginal Australians. “But there is substantially less Denisovan DNA in New Guineans on the X chromosome than the rest of the genome,” co-author David Reich, from the Broad Institute, told reporters. This may mean that male Denisovans introduced their DNA into female modern humans, diluting the number of X chromosomes, perhaps by either voluntary admixture (romance) or legitimate rape, as has happened in other populations. Or, natural selection may have removed X-linked Denisovan genes that conferred some disadvantage.

The 30-fold improved Denisovan genome is perhaps most illuminating as a point of comparison to our own – the differences are part of what makes us human. “We can look at the complete catalog of all the mutations that have happened during this last step of human history since we separated from our closest extinct relatives, the Denisovans and Neandertals,” said Pääbo.

The team was astonished that the list isn’t very long: 100,000 single nucleotide changes, and fewer than 10,000 losses or gains of DNA bases. And only 260 of the differences alter amino acids in proteins and can thus impact the the raw material for natural selection. “Many may have no function, but some may hide crucial changes essential to what made modern rapid human evolution possible, including development of the culture and technology that have allowed our species to dominate large parts of the biosphere,” Pääbo said.

Subtracting Denisovan sequences conserved in ape and monkey genomes reduces the list of distinctive human mutations to 23. “Eight of them have to do with brain function and development, connectivity, and synapses,” Pääbo said, and two of them are implicated in autism.

As fascinating as the peeks into archaic human genomes are in helping to better define ourselves and trace our origins, I’m more intrigued by a more distant time, when Australopithecus died out as Homo began to flourish. It was a time, about 2 million years ago, when, among the newcomers, vocalization became language, stance straightened, and stronger necks, larger leg muscles, and bigger butts made us born to run, easing migration and improving diet as hunting skills sharpened. A mutation in a muscle protein gene called “room for thought” shrunk the jaw, enabling the brain to expand. Perhaps the gene duplications that today distinguish our genomes from those of our closest non-human relatives miscopied themselves into existence at about this time, providing new canvas for the genes that would propel our abilities to remember and learn.

Timothy White, head of the Laboratory for Human Evolutionary Studies at the University of California, Berkeley, captured best the spark that became humanity: tool use. He’s headed teams that have unearthed much of our past in the Afar river valley in Ethiopia, where fossils go back 6 million years to our very beginnings. I interviewed him in February 2004 for a cover story in The Scientist. It was a visit memorable not only for the wonderful discussion and the fact that Dr. White resembled in many ways Indiana Jones, but because behind him, amid the skull parts and teeth festooning every surface of his office, loomed the bent form of a giraffe, a gift from Michael Jackson and likely an unfortunate former resident of Neverland.

(Here I admit to a JLSPD – a Jonah Lehrer self-plagiarization disclosure. This means re-using a quote. Dr. White’s words also appear in my human genetics textbook and the shorter "Human Genetics: The Basics". Jonah Lehrer is the former New Yorker writer chastised for re-using quotes shortly before resigning for putting words into Bob Dylan’s mouth in the book "Imagine: How Creativity Works.")

Said Tim White, “It all started about 2.5 million years ago, when guys started banging rocks together. That allowed the niche to expand, and the start of culture. Tool making, utilizing stone, probably began in Australopithecus. These bipeds were small-brained, and they weren’t busy becoming human, but being australopithecines. At some point, a population of that highly intelligent, bipedal generalist – Australopithecus – began to exhibit behaviors that we see in the chimps, which hunt monkeys but lack tools. That particular subset of early hominid that didn’t lack those tools anymore may have formed the beginning of the lineage that would ultimately diverge from other australopithecines that kept on being australopithecines, and that lineage would go on to become early Homo.”

Perhaps the most compelling question the many fossils from Ethiopia and elsewhere, and from the sequenced genomes of those closer to us, raise is this: How many others of our ancestors are out there, undiscovered?

This blog appeared first as a Scientific American blog on August 30.
Be the first to comment