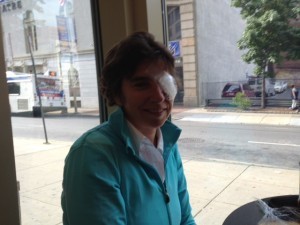 My last article highlighted my experience at the Visions 2012 conference and the closing session’s three main speakers. They spoke about some of the ongoing human clinical trials exhibiting great promise for battling retinal degenerative diseases. One of those speakers, Matthew Vincent, Director of Business Development at Advanced Cell Technology (ACT), spoke effectively about the current stem cell trials for both Stargardt disease and AMD. And even more recently, ACT announced that they treated their fourth Stargardt patient, the first patient to receive a higher RPE cell concentration in their worst eye. I am excited to inform you that I am this patient! I was treated on July 11th at Wills Eye Institute in Philadelphia. It was an exciting experience that I’ll never forget; physically joining the team within the many teams that have worked so hard to bring us to this point in medical history.

Well there’s a lot to catch you up on but first I will tell you that the surgery itself, performed by Dr. Carl Regillo, went according to plan. Within a week, the doctors could no longer tell that my eye had been physically intruded upon using a common procedure called a vitrectomy. This procedure was used to remove vitreous fluid and replace it with something unusual - RPE cells derived from just one donated human embryonic stem cell (hESC). After two weeks, my vision appears to be the same as it was before surgery, which is expected at this point.

Let’s back up a bit. After seeing interviews of the first two patients in this trial on the CBS Morning News and listening to them on NPR, I wanted to know more. The Stargardt patient, who understandably wished to remain anonymous, could now read five letters on the ETDRS visual acuity chart. But what did she see in those letters beforehand? Could she see part of the letters clearly using a small remaining portion of central vision? Did the bold letters appear gray because her vision was cloudy, or did the letters appear to be completely missing from the page, as if she were looking at a white sheet of paper?

Why does that matter? Since Stargardt Disease is a slowly progressive disease, I wondered how many years ago was it that she could actually distinguish those letters. In other words, how many years did this procedure effectively reverse? Since these new healthy RPE cells theoretically take over the job for your current genetically deprived RPE cells in the eye, they should be “munching up” the debris that naturally flakes off your photoreceptor cells every day…so what functional aspect of vision comes back first? Does what was lost last come back first? Though I still had nearly 20/20 vision at age 20, my ability to scan across text quickly (aka speed read) was noticeably poor even at age 10. And my ability to quickly adapt from dark to light and recognize faces was compromised by age 30 although my vision was still better than 20/100.

It seemed the only way to get the answers was to try this myself. Easier said than done; only 12 participants would be included in this Phase I/II trial. I really had no illusions that I would be accepted into this trial but wanted to go through the motions and see how far it went in order to blog about the process.

The first thing I did was visit www.clinicaltrials.gov and search for all the current trials for Stargardt Disease. I found the ACT trial and read the eligibility, inclusion, and exclusion criteria. I didn’t want to waste anyone’s time but I didn’t see anything that would exclude me. I showed the study to my ophthalmologist at my yearly visit and he agreed. I had the closest participating institute fax the required form to his office. There was a lot more to it, but that got the ball rolling. Through a series of luck, timing, and hard work, the stars aligned perfectly, and I overcame what appeared at first to be the logistical nightmare of my life.

But a nightmare it was not. I am a procrastinator at heart, but untrue to form, I was totally ready and prepared for this a full week or so before it all happened. Though in retrospect, I think I had been preparing for this since 1995 when I first read about the probable cause of my failing vision – poorly equipped RPE cells in the RPE layer.

I received twice as many RPE cells (100,000 to be exact) as the first three Stargardt participants. Amateur logic tells me that I should experience improvement in half the time. But then I remember there are millions of photoreceptor cells that take residence in the RPE layer – will 50,000 extra fresh RPE cells really make a difference, or could the excess baggage actually have a negative effect? My positively foolish self is truly looking forward to this adventure of not knowing what’s next. Just like when I ran high school cross country, I never liked to run the race course beforehand because I didn’t want to know how far I had left. This time around is no different; I’m going to experience every turn for the first time. The only difference is this time, I’m taking you along for the ride.
5 Comments

Thank you for posting this blog. I wish you well, and look forward to wollowing your progress.

Best Wishes to Maurie! Fingers crossed for a great outcome.

I am getting a blog on Public Library of Science (PLoS) starting mid-Sept, called Genetics in Context, and I will post about Maurie (I've been talking with her since June) and her treatment for my first blog. It coincides with my article on human ES cells that appeared in The Scientist in 1997 -- I'll take a look at translational medicine in action.

Ricki,
Congrats on the PloS blog. I look forward to reading all of your posts.

Thanks, Rollin. It will be tough to crank blogs out weekly, especially since they don't pay anything. But I'll try ... always on the lookout for interesting people to interview. Thanks for reading! I'll have another post up in a day or two but its genetics, not stem cells (yet)!