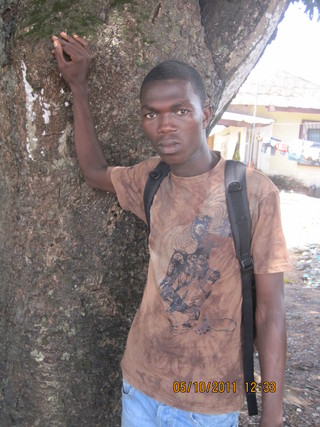 The electronic communication with our Liberian friend is odd in the face of the crumbling infrastructure, the abandoned hospitals and schools. He taps on a phone, too terrified to enter an Internet cafe. And I’m mortified that the NBC nightly news placed a lengthy NASCAR crash report before an Ebola update. Eman wants to know why the US didn’t pay attention until the arrival here of two white, American patients. So do I.

Ebola virus has a mere 7 protein-encoding genes, but the RNA that is its genetic material holds hidden information. One key gene (GP, for glycoprotein) has an overlapping reading frame so that an alternate form harbors a stretch of added adenines. And the encoded protein is cut after translation, generating a mature secreted form that sits on the surfaces of viral particles, as well as a sugar-coated smaller part, like a moon carved from a planet.

Having a dinky genome doesn't necessarily mean the virus itself is small. Like panes of a greenhouse or panels of a geodesic dome, the capsid proteins of a virus can fashion quite a large structure. The soup ladle that is Ebola virus is actually long.

The irony of it all is stunning. Genetics and genomics journals bulge with ever-bigger data. More exomes, more genomes, meta-analyses of meta-analyses that search for meaning among the nearly limitless combinations of variants of our 20,000 or so genes. And yet a 7-gene “infectious particle,” so streamlined it isn’t even a cell, isn’t even alive, can reduce a human body to a puddle, inner barriers dissolving into nothingness, within days.

How does Ebola virus, so much simpler than influenza, than HIV, do it?

It turns out that the boxer shorts salesperson might have been unwittingly onto something – the way that Ebola replicates like mad while sabotaging the human immune response is similar to how the 1918 flu killed in not days, but hours.

AN EBOLA TIMELINE
Ebola virus homes to certain immune system cells, the boxy epithelial cells that aggregate into layers, and the sleek endothelium of the circulatory system. Inside the body, the virus first tackles innate immunity – the immediate and generalized response to infection. It commandeers monocytes and macrophages, the wandering cells that travel around the body, dividing, distributing its deadly cargo.

In those who will not survive, the innate immune response goes on a tad too long. The virus also invades dendritic cells. These are the sentries that “present” the pathogen’s provoking antigens to the parts of the immune system that carry out the second phase, the slower and targeted adaptive response. And indirectly, mysteriously, lymphocytes die en masse, instead of producing antibodies.

Yet at the same time, a "cytokine storm" erupts, sending other arms of the immune response into overdrive. Levels of gamma interferon, interleukins 2 and 10, and tumor necrosis factor soar, triggering fever and flu-like symptoms. It’s as if there’s no interferon at all. Viruses do not see it.

The bizarre immune response during Ebola infection is rightfully termed “paradoxical,” at once too slow, too little, too intense.

Then the body’s barriers begin to break down.

The endothelial cells that curl into the tiny tubes that are the capillaries, and also line the interiors of larger blood vessels, contort into blobs. Holes appear. Barriers melt away, and the fluids that they contained redistribute. The still-crazily-replicating virus now has direct access to organs, favoring the adrenal cortex (plunging blood pressure), the kidneys, gonads, spleen, and most dangerous, the liver.

The final stage is the bleeding, as the liver’s output of clotting factors becomes unhinged. One protein in particular goes by various names: in the older literature it’s simply “tissue factor,” but is also known as thromboplastin, CD142, and factor III.

Whatever it’s called, this cell surface glycoprotein converts prothrombin into thrombin, the essential final step in blood clotting. The fact that no deficiency of thromboplastin is known – the others cause hemophilias and other clotting disorders – belies its importance.

BACK TO THE GENES
A human body overwhelmed with Ebola virus is like a castle whose defenses fail, from the inside out, all orchestrated by that puzzling handful of genes.

GP targets the virus to certain cell types, deforms the endothelium, and destroys antigen presentation. ZMapp, the drug being given to a handful of infected people ahead of human testing because it worked in macaques, counters GP. It consists of three monoclonal antibodies produced in tobacco cells. I certainly hope no one protests this use of a genetically modified organism.

VP24 cuts off the host transcription factor STAT1, which is required to use gamma interferon, according to a report just published in Cell Host & Microbe. And VP40 protein, because it forms the outside of the virus, should elicit an antibody response, only it usually doesn’t.

The power of a virus such as Ebola is so astonishing that it tends to evoke anthropomorphism. But the virus isn’t an enemy intentionally trying to kill people, as one prominent researcher told the New York Times, calling the virus “a survivor. It does what it can to avoid the human immune system.”

Another type of survivor might provide the clues necessary to stop the current epidemic: people whose immune systems can fight off the virus.

Survivors have 10 million viruses per milliliter of blood serum; people who succumb have 10 billion. So far we know that the immune response in people who survive is subtly distinctive, the innate response turning off at a specific point and the adaptive response beginning in time to help, neither becoming overactive. Identifying biomarkers may reveal the specifics that drive resistance, such as an adhesion factor that enables the torn-apart endothelium to re-attach.

Ebola hemorrhagic fever is the consequence of runaway viral replication against a backdrop of a strangely deranged immune response. We know the viral genome sequence, and I’m sure the genome sequences of survivors are being or will soon be sequenced. It’s only a matter of time until researchers deduce how variations of the 20,000-gene human genome or its expression resist the 7-gene genome of Ebola virus, and figure out how to replicate the response.

Until they do, I’m petrified.

P.S. August 23, Eman is in the hospital and out of communication. His current diagnosis is hookworms and malaria.
Be the first to comment