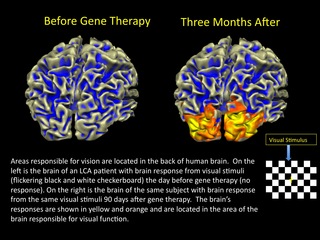 It doesn't take a brain scientist to see that the visual cortex of this formerly-blind woman lights up -- after gene therapy.
It isn’t often that a brain scan chokes me up, but this one did. The fMRI shows area 17 of the visual cortex coming to life in a woman born with Leber congenital amaurosis type 2 (LCA2). She’s part of the very same gene therapy clinical trial chronicled in my upcoming book The Forever Fix: Gene Therapy and the Boy Who Saved It. The symbolic boy is Corey Haas, who, four days after gene therapy in 2008 at age 8, screamed when he saw the sun at the Philadelphia zoo, his shadow world suddenly brightened.

Functional MRI detects changes in blood flow as brain cells use energy. My best friend Wendy Josephs, an optometrist, photographer, and sometime bellydancer, summarized the fMRI best: “Unbelievable!!! Area 17 coming to life! It should have been dead! This opens up so much potential in SO many ways!”

LCA2 is inherited from carrier parents, and fits the criteria for gene therapy perfectly: the glitch is easy to understand. An enzyme is missing from the cell layer skirting the photoreceptors (rods and cones). Normally the enzyme converts vitamin A into a usable form, so the photoreceptors can detect light energy and signal the brain.

The fMRI scan stunningly bridges the molecular explanation of LCA2 with reports from patients after gene therapy. They can suddenly see the sun and stars, dials on a dashboard or clock, and many other mundane things that the sighted take for granted. Wrote Corey’s dad on Facebook June 28, 2010, “The lightning bugs were out tonight, their butts all lit up. Corey could see them!” This was after Corey had had his first eye done. He told me that he liked to hold a hand over his treated eye and see nothing, then move the hand to cover his still-bad eye and suddenly see the fireflies.

The researchers – Jean Bennett, Manzar Ashtari, Al Maguire, Katherine High and several others from the University of Pennsylvania and Children’s Hospital of Philadelphia – had treated one eye in a dozen patients. After the astonishing results, all 12 begged Dr. Bennett to do their second eyes, but the rules of clinical trials demanded preclinical -- animal -- evidence.

Sheepdogs with the disease had already shown that treating both eyes worked. “Two groups of dogs have received bilateral treatment, one eye at a time, with no adverse effects noted in any of the treated dogs. Therefore I expect the treatment in humans to be as effective for years to come,” says Kristina Narfström, DVM, PhD, who has been studying Corey’s disease in Briard sheepdogs since 1989 and discovered the gene (RPE65).

And so three women from the clinical trial had their second eyes done. But the researchers were concerned that the patients might have an immune reaction not seen in the pups, who do not naturally harbor the virus used to deliver the gene therapy, as we do. Says Dr. Bennett, "We did studies in animals using real test conditions and didn’t see a toxic immune response. But a human is not equal to a mouse, which is not equal to a dog, which is not equal to a monkey.” Happily, an initial bit of immune activity quickly and quietly faded.

Surprising even to the researchers was an apparent spectacular synergy: the patients’ originally-treated eyes improved too!

Although it will be a few more years before the average ophthalmologist will be able to do the gene therapy for Corey’s disease, LCA2, Dr. Bennett and her colleagues are already preparing programs to teach retinal specialists – and they’ve stockpiled enough of the gene therapy to treat all 3,000 people in the world who have the disease. Even more exciting is that the approach will likely help others with different forms of LCA or retinitis pigmentosa.

I teared up at the fMRI of the awakened visual cortex, but I’ve already seen firsthand how well Corey is doing after his gene therapy – last spring, for my book, Wendy the optometrist took a photo of him airborne, jumping on his bed. And he landed perfectly.

I can’t wait to see the fMRI of Corey’s brain after his second gene therapy. Stay tuned!

(I wrote a more technical version of this blog for Medscape Today, but bear with their sign-in procedure – it’s free and they won’t spam you. The full report is in Science Translational Medicine.)