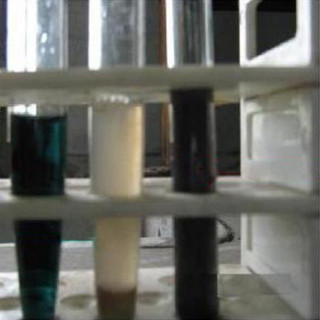 The urine of a person with alkaptonuria turns dark upon standing.
When I read the headline of a recent press release – "A new cause of osteoarthritis identified by research on a rare disease" -- I was drawn to "rare disease," even though I actually have osteoarthritis. And when I read “alkaptonuria," I was catapulted back more than a century to the first description of an "inborn error of metabolism.”

Alkaptonuria is famous in the history of genetics as the first recognized "inborn error of metabolism." And it holds clues to the much more common osteoarthritis. Perhaps the best example of a rare disease helping treatment of a common one is the statin drugs. They grew out of research on the one-in-a-million children who die young of heart attacks and strokes due to familial hypercholesterolemia (FH). Several of my DNA Science posts deal with drug testing for the rapid-aging disease progeria that may lead to repurposing of a drug for conventional and common atherosclerosis.

THE FATHER OF INBORN ERRORS
Alkaptonuria is not quite as rare as FH, but is certainly more so than osteoarthritis. Alkaptonuria affects 1 in 250,000 individuals, whereas osteoarthritis affects 13.9% of those over age 25 and 33.6% of people over age 65. Clinicaltrials.gov lists 5 studies for alkaptonuria (all for the same drug already used for a similar condition), and more than 2,000 for osteoarthritis.

To introduce inborn errors of metabolism in my human genetics textbook (new edition publishes this week!) I tell the tale of Sir Archibald Garrod and alkaptonuria. In earlier editions I wrote that the first sign is "urine that turns black upon standing," which unfortunately caused college students to think that people with the disease should sit down when they pee. The urine must stand, not the urinator.

Sir Garrod (1857-1936) was a physician at St. Bartholomew’s in London when he investigated the odd disease at the turn of the twentieth century. His initial description in
The Lancet in 1902 described the telltale excretion of homogentisic acid in urine that turned black upon standing. Sir Garrod noted that when one child had black urine, a sibling sometimes did too. In fact, 19 of 32 cases that he studied were from only 7 families. What’s more, parents of affected children were more often first cousins than one might expect for such a rare condition.

Sir Garrod described alkaptonuria as an "alternative mode of metabolism," way ahead of his time in realizing that people vary. He entitled that 1902 paper "The incidence of alkaptonuria: a study in chemical individuality." It is that individuality that today’s exome and genome sequencing, not to mention genome-wide association studies, seek to reveal.

The phrase "inborn error of metabolism" didn’t appear until Sir Garrod’s Croonian Lectures to the Royal College of Physicians, published in 1909, which introduced "Garrod’s tetrad" of alkaptonuria, cystinuria, pentosuria, and albinism. Timing is critical in the story. Back in 1902, Mendel’s laws had just been rediscovered, and so much of the Lancet paper addresses whether the preponderance of cousin-cousin parental pairings and familial clustering revealed the recessive inheritance that Mendel had described so elegantly for peas decades earlier.

Sir Garrod was astonishingly ahead of his time, zeroing in on the "one-gene, one-enzyme" hypothesis that is usually dated to studies in bread mold circa 1941. The enzyme behind alkaptonuria wouldn’t be discovered until 1958, the gene in 1996.

ALKAPTONURIA DARKENS CARTILAGE
In a nutshell, an inborn error blocks synthesis of an enzyme that is part of a metabolic pathway. Like a garden hose with a kink, stuff before the block in the pathway builds up, and the stuff is a dribble, or nothing.

Tyrosine is one of the 20 amino acids of life. Five stepwise reactions break it down, providing starting materials for production of thyroid and other hormones, the pigment melanin, and intermediates in the energy pathways. Block any step and a specific inborn error results. The ones besides alkaptonuria, which intervenes between steps two and three, cause versions of tyrosinemia. All hamper utilization of dietary proteins.

Early in life, alkaptonuria is mostly a peculiarity, not a serious disease. After the blackened diapers of childhood and the dark pee, the pigmentation – called ochronosis – typically doesn’t affect health until after age 30, when it darkens and degrades cartilage. In some affected individuals, the tips of the ears may appear dark. Treatment is painkillers and joint replacement surgery to deal with the very painful arthritis. But alkaptonuria also causes kidney stones, heart valve damage, tendon and muscle rupture, and fractures.

ENTER HORSES
The arthritis of alkaptonuria is like that of the more common osteoarthritis, but the inborn error is even more like a “novel pathology” of racehorses described by Alan Boyde, a professor of mineralized tissue biology (and a PhD and dentist) at the Barts and the London School of Medicine and Dentistry, in 2011.

Dr. Boyde and his group dissected digits of euthanized racehorses, and probed them non-invasively with “nanoindentation” and a slew of imaging techniques. They discovered “high density mineralized protrusions” – HDMPs. Hard spikes that fill joint spaces. Ouch.

The key word is “non-invasively,” because it turns out that the reason these painful spikes haven’t been seen in those of us with run-of-the-mill osteoarthritis is that the technique to study joints destroys them! (See Heisenberg uncertainty principle: don’t alter what you’re trying to study!)

When Dr. Boyde and colleague Jim Gallagher, PhD, from the University of Liverpool’s Institute of Ageing and Chronic Disease and co-workers replaced a hip joint in a 49-year-old man with alkaptonuria, they decided to take a closer, less-destructive look. So instead of dissolving away hard stuff in the joint so they could see better, the researchers used a microtome to gently slice the tissue, like roast beef.

When the researchers went back to MRIs of the man’s hip, the telltale HDMPs were indeed there – but had gone unnoticed.

LOOKING AT COMMON OSTEOARTHRITIS
The next step was to look at joints from patients with osteoarthritis, which they did for removed hip joints from two replacements, and from 6 cadavers. Keeping the joints intact again revealed the spikes of calcification. "We found several instances, enough to assure us that the research field should now be on the lookout for them," the investigators write.

The spikes tend to appear near dead cells. Summed up Dr. Gallagher, "These small, sharp particles could act like an abrasive powder scouring the surfaces of the joint."
Interestingly, the man with alkaptonuria had complained of severe joint pain, yet conventional X-rays had not shown advanced joint destruction. But the damage was there. This scenario reminds me of my husband’s visit to an orthopedist who informed him that he was imagining his severe back pain because the tools at the doc’s disposal hadn’t shown anything abnormal.

My own osteoarthritis appeared at age 33, as it did in my mother and her mother. Fortunately it only affects my hands, which I discovered upon whacking one of them and suffering surprisingly intense and long-lived pain, at about the same time that I became unable to play guitar or form a fist. It’s in my neck and toes, but doesn’t really bother me.

Lessons learned from the alkaptonuria/osteoarthritis story:

• Studying rare diseases in people and animal models (like racehorses) can unveil pathological mechanisms behind more-common, less-severe, counterparts.
• If a physician claims a condition doesn’t exist, find a practitioner who will look at the problem another way.
• In medical genetics, old stories are still valuable.
• We don’t know all there is to know about human anatomy and physiology.
• The good news for human runners from horses is that development of joint spikes was not significantly associated with number of racing seasons, age, earnings, number of days in training, total distance galloped in one’s racing career, or presence of wear lines.
• It’s ok to stand while peeing, even if you have alkaptonuria.


A version of this post first appeared at my DNA Science blog at Public Library of Science.