Gene Therapy for the "Butterfly Children" 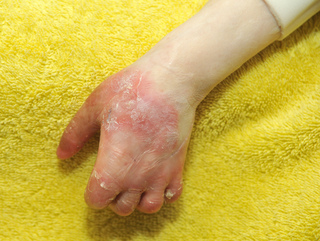 Videos of the "butterfly children” are difficult to watch. The name comes from the delicate skin of people who have epidermolysis bullosa, which is reminiscent of the fragility of a butterfly’s wings. The slightest touch evokes painful blisters and peeling skin.

“I was born with the worst disease you never heard of,” says Rafi Lily in one video. “I know mom doesn’t want to hurt me, but taking off bandages is hard. It feels like fire is beating me up and sharp dogs teeth are digging into me. But we’ll have to do it all over tomorrow and the next day and every day for the rest of my life.” Read More
Be the first to comment

Genetically corrected stem cells replaced a boy's skin.
A 7-year-old boy whose outer skin layer was nearly gone due to a genetic disease has had it replaced, using his own genetically-modified stem cells, report researchers from Germany, Austria, and Italy in Nature.

He has junctional epidermolysis bullosa (JEB). The thin tissue layer separating the epidermis from the dermis below is extremely fragile and easily damaged, resulting in blistering, peeling, and fraying of the skin, leaving wounds that can be deadly and raising the risk of skin cancer. The researchers replaced the boy’s skin with grafts to his limbs and then the back of his body, followed by closing some of the gaps. In essence, they engineered and knit him a new epidermis – with a lot of help from the boy’s own capacity to heal. Read More
Be the first to comment