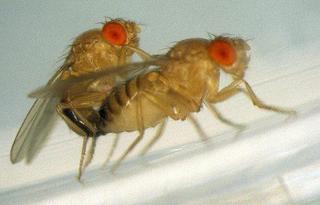 I wrote "The Making of a Mutant" in 1978. Then a PhD student in the lab of Thom Kaufman at Indiana University, I snuck the story into a draft of a manuscript we were submitting to the journal Genetics – just to see if the boss was paying attention. The tale was about our research on the mutation Antennapedia in the fruit fly Drosophila melanogaster, which reroutes development so that legs grow where antennae normally extend.

My story was passed down to generations of graduate students, and read aloud at Thom's 60th birthday party many years later. I published "The Making of a Mutant" at Scientific American blogs in 2012, and then here at DNA Science in 2013. It's a geneticist's love story for Valentine's Day.

But never in a million years could I have imagined that my vision of a mutation that takes over a population would echo in the form of a novel coronavirus that is continually reinventing itself as it tears through human bodies and populations.

My story chronicles how the abnormal becomes the normal, and the new normal eventually spawns a new abnormal. That's what evolution is, change at the molecular level that reverberates up through populations of organisms – and viruses. The mutations in my imagined world in a milk bottle, home to the flies, were induced – in contrast to the situation for SARS-CoV-2.

We can't stop evolution. Mutation is a fundamental characteristic of a genetic material, endowing it with the plasticity that underlies adaptation, which fuels evolutionary change.

Evolution of SARS-CoV-2 in a Single Patient