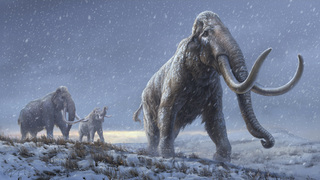 An international team has assembled billions of DNA snippets from molars that three mammoths left in the permafrost of northeastern Siberia, at widely different times. The research reveals an unrecognized ancestor that contributed half of the genome of the mammoth species that came to North America some 1.5 million years ago. The report appears in Nature.

The timescale of the study paints a portrait of mammoth evolution, perhaps even capturing a glimmer of speciation. The finding also sets back the clock of ancient DNA analysis; a horse that lived 780,000 to 560,000 years ago holds the record.

The three mammoth specimens were excavated in the 1970s from different locations in Siberia, dating from half a million to roughly 1.2 million years ago. They reside at the Geological Institute, Russian Academy of Sciences, in Moscow. The permafrost helped to preserve the DNA.

The Land Bridge Where It Happened