A Glimpse of the Ocean’s Twilight Zone Through Environmental DNA 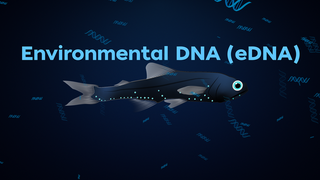 Environmental DNA, or eDNA, gives researchers clues about which species are in that water–and their relative abundance. A WHOI-led study finds that changes in eDNA concentration reveal details of a creature's movement to and from the ocean twilight zone. Natalie Renier © Woods Hole Oceanographic Institution

To most people the Twilight Zone evokes memories of Rod Serling's iconic TV series of the 1950s and 1960s, or the less tantalizing recent reboot. But the Twilight Zone project at the Woods Hole Oceanographic Institution isn't a peek at William Shatner seeing a monster on an airplane's wing or Billy Mumy turning an annoying adult into a jack-in-the-box.

The twilight zone is a layer of the ocean that encircles the planet, from about 200 to 1,000 meters (650 to 3,300 feet) deep. It's also called the mesopelagic or midwater region. The zone is cold and dark, with flashes from bioluminescent organisms that shield them from predators. Pressure reaches 1,500 pounds per square inch. The biomass of fish in the twilight zone may exceed that of the rest of the ocean – but we know little about their distribution.

Residents of the twilight zone range from tiny bacteria and plankton, to fish, crustaceans, squid, and all sorts of gooey variations on the animal theme, like jellyfish and comb jellies. Quadrillions of bristlemouth fish, named for their spiny teeth, live in the zone. And we don't even know how many species have yet to be described. The animals in the twilight zone support the vast food web, moving carbon from the surface to the depths, regulating climate.