How the Giraffe Got Its Spots: A Genetic Just-So Story 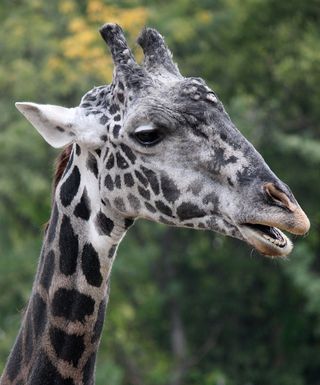 In Darwinian terms, a trait persists because it provides a benefit that leads to reproductive success – the essence of natural selection. The benefit isn’t always obvious to us. Two years ago DNA Science covered the case of an anteater’s scales – genome sequencing revealed that what looks to us like armor actually provides an immune response to skin infections.

Rudyard Kipling’s (1865-1936) Just-So Stories famously explained “how the leopard got its spots,” “how the camel got his hump,” and “how the rhinoceros got his skin.” The ideas of Kipling, a journalist, writer, poet, and novelist, seem superficially to echo those of Darwin and Lamarck in pondering evolutionary advantages of inheriting traits distinctive for a species, but diverge in attributing a purpose and goal to changes driven by natural selection. Biology doesn’t work that way.

Now joining the list of the leopard’s spots, camel’s hump, rhinoceros’ skin and pangolin’s scales is the giraffe’s markings. The new report, “Seeing spots: quantifying mother-offspring similarity and assessing fitness consequences of coat pattern traits in a wild population of giraffes,” published in the journal Peerj, uses image analysis and statistics to fashion “a new quantitative lexicon for describing spots.” It’ll remain to others to sequence more giraffe genomes to figure out whether the animal is of a single species with nine subspecies, or four species.

To continue reading go to DNA Science, my blog at Public Library of Science, where this post first appeared.