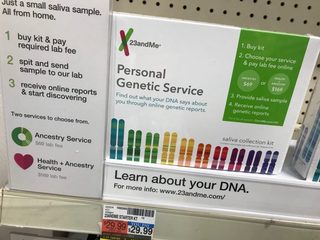 The text you type here will appear directly below the image
Lately people have been sending me their direct-to-consumer (DTC) genetic testing results for help with interpretation. Although companies like 23andMe and ancestry.com do a pretty decent job of explaining findings, people not familiar with genetics might be confused. And they can be so upset, or scared of the science, that they forget that human behavior lies behind some disturbing information.

So it was that Lisa G., not her real name, emailed me recently, asking about the likelihood that a stranger claiming to be her half-brother really was. He’d gotten the idea from a 23andMe test. So as ads for DTC DNA tests ramp up as the holidays approach, I thought I’d relate this simple example of the feelings that findings can evoke.

One glance at the results Lisa G emailed me told me that the young man claiming to be her half-brother in fact could be. They’re alike in 25.7% of their DNA; a full-sib would share roughly 50%. And they match in 37 overlapping segments among the 22 autosomes, but don’t share sequences on the X. That means they have different mothers. The results were a display of cartoon chromosomes with shaded areas in purple where Lisa and the young man share sequences against a background of gray regions where they diverge. The implications seemed clear – the relationship was possible.

But Lisa just couldn’t imagine her father having another kid and not telling her. And here is where my expertise came in, not as a geneticist, but in having watched Law and Order and soap operas for many years.

I pointed out alternative explanations:

1. A coincidence that they share a quarter of their genomes (highly unlikely).

2. Lisa’s dad might have a twin that he didn’t know about. This is like the deceased Cassie and her identical twin Mariah on The Young and the Restless (Y+R). They were separated at birth and their mother, Sharon, didn’t even know she’d birthed two babies until Mariah showed up as a millennial in 2014, after skulking around for a bit spooking people as Cassie. It happens.

3. Stolen sperm. Diane Jenkins did this on Y+R back in the ‘80s, and Chloe repeated the deed just this past year. In fact, soaps pioneered the repurposing of turkey basters to assist with sperm-snatching and delivery. Or, might Lisa’s dad have donated sperm in college to make a few bucks and forgotten about it? We all do things in college that we don’t remember.

4. Another male relative is the dad. Consider the plight of Nicholas Newman of Y+R, who isn’t aware that his toddler son Christian is the offspring of Nick’s deceased half-brother Adam (who went on to become Kevin on This is Us). The Bold and the Beautiful offers confusing variations on this theme with the character of Brooke, who has married older guy Eric Forrester, as well as his sons Thorne and Ridge (who alas turned out to have a different biological father). Still, full brothers share only half their DNA and half-brothers only a quarter, leaving plenty of diverging genome regions to indicate who’s the daddy. And just this week! Ridge’s daughter Steffy headed to the doc for a routine check-up, only to learn she's preggers (despite being told she couldn't conceive), after having recently done the deed with both her husband Liam and his father Bill. Stay tuned.

“Is it possible he’s my uncle’s son?” she asked hopefully, at first.

“To tell for sure you’d need a DNA sample from your uncle. Your dad and uncle might share even more than half their genes if their ancestry group is somewhat inbred — like both Italian, both Jewish, both African-American. So yes, it could be your uncle,” I answered, providing some relevant soap opera examples.

She answered immediately. “Ok, wait. As far as bad TV plotlines go … my grandfather was a wild one, could he be the father?!”

Yes, he could. Here’s a case in which DNA testing revealed that 2 of a woman’s 3 kids were fathered by her husband’s stepfather.

I await further news from Lisa. And Steffy, who likely conceived twins, one with each man.

A caveat: Interpreting results of a paternity test at the chromosomal level is easy, especially given the visual format of the findings. Ancestry based on markers and tests for disease-related gene variants, such as SNPs, are much more data-dense and complicated. They’d take hours to interpret.

I’ll be off the next 2 or 3 weeks, and will return with an analysis of my own DNA variants, unfortunately recently obtained for a more serious reason than curiosity or entertainment.

This post first appeared at my DNA Science blog at Public Library of Science.
Be the first to comment