From Blue Lights to Gene Therapy: The Intriguing History of Crigler-Najjar Syndrome 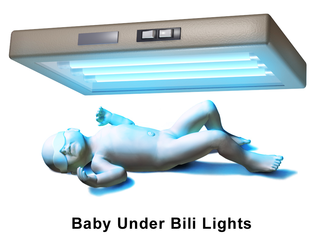 Seeing Crigler-Najjar syndrome among recent news releases announcing upcoming gene therapy efforts conjured immediate images of an Amish farmhouse with a spooky blue glow emanating from an upstairs bedroom, where a small child, clad only in diapers and wearing goggles, slept beneath a “light canopy” suspended from the ceiling. The light – phototherapy or “bili lights” – breaks down the accumulating bilirubin that the tiny yellow body beneath cannot.

Most cases of neonatal jaundice are due to a transient blood type incompatability or blocked bile ducts, and vanish within days. Not so

Crigler-Najjar syndrome, which hampers the ability to convert the bile pigment bilirubin into a soluble form that easily exits in feces.

A bit of biochemistry:

The oxygen-carrying part of the blood hemoglobin molecule, heme, is broken down into bile pigments – first green biliverdin, which is then broken down to orange bilirubin. If an enzyme, UGT1A1, is absent, bilirubin isn’t dismantled and its level in the blood rises, turning the skin and the whites of the eyes yellow. If this jaundice continues, eventually the bilirubin spills from the bloodstream into the brain, causing kernicterus, a form of brain damage. The child is lethargic, feverish, won’t eat, emits a high-pitched cry, and arches the back and writhes. It’s lethal.

An Astute and Observant Nurse

The discovery of the effect of light on neonatal jaundice is one of my all-time favorites. It’s attributed to Richard John Cremer, a pediatrician in charge of the premature baby ward at Rochford General Hospital in Essex, UK. It was the summer of 1956 and head nurse Sister J. Ward liked to take her patients into the sunshine in the courtyard that the rooms overlooked, when she could sneak them out. One day a blanket partially covered a baby who was yellowed from jaundice. Later, the shielded area of skin was still yellow, while the area exposed to the sun looked normal. The Lancet’s version of the story says “it was noticed that,” perhaps a way to avoid crediting the astute nurse because Cremer indeed took note.

After the undraped-baby-in-the-courtyard incident, someone in the preemie ward left a blood sample from a jaundiced baby who had not yet been transfused (the standard treatment) on a windowsill facing the courtyard. “When eventually found it was noticed that the serum was green instead of yellow and the bilirubin content was far below what was expected. It seemed that we had stumbled on something that might have a practical application,” Cremer said.

Experiments ensued. In the first, Cremer placed 13 jaundiced preemies in alternating direct sunlight and shade for 15 to 20 minutes, looking not for striped babies, but measuring their blood bilirubin levels. Sun exposure seemed to work.

Others joined the research, which turned to investigating various light sources, including a streetlamp. They built contraptions and conducted tests. And so was born phototherapy, using eight tubes emanating blue fluorescence held above jaundiced children.

Cremer and his colleagues published the “Influence of light on the hyperbilirubinaemia of infants” in The Lancet in May 1958, the clever nurse not among the authors. But Cremer illustrated his memoir with a photo of the nurse, not his invention. Phototherapy to treat newborn jaundice was ignored for a decade, until rediscovered in at least 19 papers published in the 1960s.

Among the Amish – and Earlier

Fewer than 100 cases of Crigler-Najjar are currently known, and a fifth of them are among the Plain people, the Amish and Mennonites. But this just means that the mutation was once part of the subset of the gene pool that these people brought from Europe in the early 1700s, amplified as relatives had children together (consanguinity) in the small communities. It’s one of the conditions studied at the Clinic for Special Children in Strasburg, PA, where I visited five years ago. The clinic is the site of one of the new gene therapy clinical trials.

But Crigler-Najjar syndrome was likely here in the US before the Plain people brought it over from Europe.

Six years before the Lancet publication on the invention of bili lights, in 1952, John Crigler and Victor Najjar, doctors from Johns Hopkins in Baltimore, described in Pediatrics 7 young patients with sky-high bilirubin blood levels. It took awhile to untangle the pedigrees, but it turned out that all of the children shared ancestors 6 generations back, in the 1600s, and that consanguinity had happened 4 generations earlier, pairing up mutations. The sick children were clinically similar: jaundice appearing in the first few days, hospitalization, fevers, and seizures, then spasticity, rigidity, and finally inability to swallow. At various times children had died at home, young and yellow, with at least 15 known cases in the inbred family.

In 1952 I suppose hospital bioethics committees weren’t what they are today, and the paper describes injecting blood plasma from a sick kid into a healthy two-month-old, to see what would happen. The fact that the subject of the experiment survived indicated that a normal liver could handle extra bilirubin, pointing to a liver disease. Then autopsies on two children revealed crystallized bilirubin blocking the tiny passageways of the liver.

Treatment with bili lights is an ordeal that can exceed 12 hours a day. Plus, the exposure thickens the skin, making it less effective over time. A liver transplant becomes the only option for survival.

Children with Crigler-Najjar syndrome need another treatment, and because it’s a single-gene condition, gene therapy may be it.

Two clinical trials are about to start, one from Audentes Therapeuticsand the other from Généthon. Both were announced February 12, and both use adeno-associated virus 8 to deliver the gene that encodes the vital enzyme that breaks down bilirubin – in one intravenous dose. That would be amazing.

The Audentes trial has received FDA Fast Track and Rare Pediatric Disease designations. It will test each of three doses in 4 children over a year of age, with one participant in each group receiving delayed treatment to serve as a control. The children will continue bili lights and their serum bilirubin levels evaluated at 12 weeks. Those with decreasing bilirubin levels will be weaned off phototherapy over the ensuing 5 weeks to see how they fare if their bodies can produce the needed enzyme. The trial, which will follow participants for five years, will take place at Children’s Hospital Montefiore in the Bronx, Children’s Hospital of Philadelphia, and the Clinic for Special Children. An ongoing parallel natural history study will track the disease course under standard treatment.

The Généthon trial will treat 17 patients over ten years old, at centers in France, Italy, and the Netherlands.

I write about gene therapy A LOT. This is the third week in a row for my blog at Public Library of Science, DNA Science, and each Monday, I choose among the advances.

Just over the past year or so, DNA Science has covered gene therapy (or editing) for recessive dystrophic epidermolysis bullosa, Prader-Willi syndrome, spinal muscular atrophy, blindness, multiple sulfatase deficiency, Huntington’s disease, Sanfilippo type A disease, lipoprotein lipase deficiency, giant axonal neuropathy, and a rare form of Charcot-Marie-Tooth disease, as well as arthritic knees, junctional epidermolysis bullosa, alcoholism, hemophilia B, and mitochondrial disease for Genetic Literacy Project, and not to mention (OK, I will) my book on gene therapy.