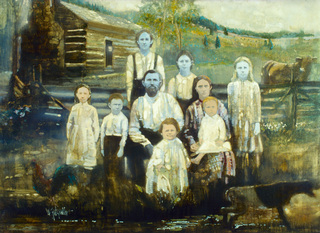 A BRIEF HISTORY OF THE FUGATES
The blue people of Troublesome Creek had methemoglobinemia, a metabolic condition affecting hemoglobin, the four-part protein that carries oxygen bound to an iron atom at each subunit’s core. Like my recent post about the deaf communityon Martha's Vineyard, it is a tale of an autosomal recessive disease that has dissipated over time as the descendants of the original carrier couple left home. The community in Chilmark so embraced the hearing impaired among them that everyone used their own local form of sign language. Acceptance wasn’t the case for the families in Kentucky, whose blue hue was a genetic badge of inbreeding.

“A rare but very noticeable condition of abnormal hemoglobin affects the “blue people of Troublesome Creek”. Seven generations ago, in 1820, a French orphan named Martin Fugate who settled in this area of Kentucky brought in an autosomal recessive gene that causes methemoglobinemia. Martin's mutation was in the CYP5R3 gene, which encodes an enzyme (cytochrome b5 methemoglobin reductase) that normally catalyzes a reaction that converts a type of hemoglobin with poor oxygen affinity, methemoglobin, back into normal hemoglobin by adding an electron. Martin was a heterozygote but still slightly bluish. His wife, Elizabeth Smith, was also a carrier for this very rare disease, and four of their seven children were blue. After extensive inbreeding in the isolated community—their son married his aunt, for example—a large pedigree of “blue people” of both sexes arose.

In “blue person disease,” excess oxygen-poor hemoglobin causes a dark blue complexion. Carriers may have bluish lips and fingernails at birth, which usually lighten. Treatment is simple: A tablet of methylene blue, a commonly used dye adds the electron back to methemoglobin, converting it to normal hemoglobin. In most members of the Fugate family, blueness was the only symptom. Normally, less than 1 percent of hemoglobin molecules are the methemoglobin form, which binds less oxygen. The Fugates had 10 to 20 percent in this form. People with the inherited condition who have more than 20 percent methemoglobin may suffer seizures, heart failure, and even death.”

Once young people began leaving the hollows of Kentucky, disease incidence there plummeted. Methemoglobinemia is also seen in Alaska and Algeria, and among Navajo Indians.

TRACKING DOWN THE PORTRAIT
Writing a science textbook entails much more than explaining; there’s also art, photos, the pedagogical elements like questions and summaries, and layout to consider. I’m encouraged to find freebie photos in a “digital asset library” the publisher maintains, but something as specific as the blue Fugates wouldn’t be among the stock photos.

I’d requested Walt’s image, which I’d seen everywhere, for past editions, with no luck -- McGraw-Hill required permission from the copyright holder, and photo editors inevitably ended up with newspapers or TV stations that had run the image and claimed it as their own. That wasn’t good enough.

I’m working on the 12th edition now, so thought I’d try again, dragging the famous image from a Google search into the digital publishing platform that has replaced dead trees, in the part of the chapter on mutation about hemoglobin. A few weeks later, I heard from a photo editor, one I hadn’t worked with before, Molly Berke. I’d left a note that the image, grainy and faded, appeared everywhere, and we’d never been able to get permission. Molly, an artist herself, instantly recognized the talent behind the painting and, sympathetic to the forgotten artist, was determined to track it down. And she did.

The only assistance I could provide was to explain that Science 82 was not Science magazine from 1982, but a stand-alone magazine. From there Molly, googling, found an obscure source with a name. Bingo! “I do photography, paint, and collect vintage photographs. I just figured this guy, as good as he is, had his own studio. So, I googled him. He does!” she emailed me.

Walt Spitzmiller answered her e-mail right away and they spoke. Then he offered to snail mail my publisher the “only original slide of the painting on earth,” Molly told me. She helped him find someone to replicate the slide and create a digital image, which opens up this post. “I'm old school, having done photo research since the late ‘80s, and I know what that slide was worth, not just monetarily, but in legacy to his family because of his artistry. A badly scanned copy has proliferated on the Internet, stolen and reused without permission countless times. The real image is so gorgeous, a feast for the eyes. Photo research is cool!”

Walt graciously gave permission for me to use the image here, knowing it would be zapped around the Internet to join its blurry echoes, and I’ve ordered a print for myself.

THE BIGGER PICTURE
I like to end posts with general musings, and a few things come to mind with the story of the blue people of Kentucky.

1. On plagiarism and fair use. The publishing world has turned upside down, and while I still earn most of my income from textbooks (I’ve also published an inexpensive, short human genetics book, second edition coming in December, much of my shorter work is republished with my earning little or nothing, websites not even letting me know they’ve used my work. I’ve gotten used to it. But photographs and original paintings are another matter. They’re more lasting than blog posts.

2. Editors are important. I’ve learned nearly all I know about writing from copyeditors. Developmental editors guide book-long projects. Magazine, journal, and newspaper (remember those?) editors help a writer get to the point and make it well. Art editors manage the dozens of illustrations that go into a science textbook. And photo editors sometimes solve decades-long mysteries, as did Molly Berke. These talented professionals, editors, should not be replaced with digital image libraries, databases, and worst of all, the aggregator algorithms that butcher science news on a daily basis, regurgitating news releases with little nuance or context.

3. On the prevalence of rare recessive diseases. Certain recessive diseases persist because carrier status protects against a different disease: sickle cell protecting against malaria is the classic example of this balancing selection.

Might a new mechanism of balancing selection be emerging, as the ease of travel disperses carriers of the same disease, while social media unites them? The blue people of Kentucky and the deaf of Martha’s Vineyard illustrate the dilution of genetic disease. Yet Facebook groups have enabled the meeting of many people who have mutations in the same gene. This is wonderful, but it could facilitate transmission of the disease when carriers have children together. A sad recent example is the “Fault in Their Stars” couple
Dalton and Katie Prager. They met on Facebook at age 18 and married at 20. He died at 25 a few days ago, from complications following a double lung transplant for cystic fibrosis that had kept him from staying with Katie in hospice care back home in, ironically, Kentucky. They hadn’t had children.

4. On the importance of phenotype, not just genotype. The straightforward treatment for methemoglobinemia came from Madison Cawein, a young hematologist who drove the eight hours from the University of Kentucky in Lexington to visit the blue people in the hollows of Appalachia in the early 1960s. He sampled their blood, recognized the enzyme deficiency, and hypothesized that the harmless dye methylene blue might provide the missing electrons to restore the ferrous state of iron in the hemoglobin molecules. The lesson: Sometimes a treatment arises from understanding the biochemistry of an inherited disease – not just sequencing DNA. I’ll return to that theme soon.