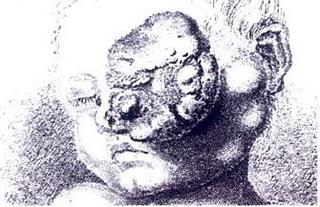 The one-two punch of inherited cancers, called the 2-hit hypothesis, was first described in 1971.

NEW PAPERS IN NEJM AND JAMA

An article published a few days ago in The New England Journal of Medicine from researchers at half a dozen top cancer centers implicates germinal repair gene mutations in some men who have metastatic prostate cancer, which places their relatives at elevated risk for several types of cancer.

Of 692 men with metastatic prostate cancer but not selected for family history of cancer, 84 had germline mutations in at least one of 20 DNA repair genes, detected in blood, saliva, or cheek lining cells. That’s 11.8%. Among 499 men with localized prostate cancer it was 4.6%, and among 53,105 people without cancer it was 2.7%. The researchers found other cancers in the families of the men with metastatic cancer who had germline repair mutations, compared to men who did not have the mutations. The repair genes found, including BRCA1, BRCA2, ATM, CHEK2, RAD51D, and PALB2, are all well-studied and tests for them have been around for years.

“These findings potentially change clinical practice because we now show that testing for these DNA repair genes should be offered to all men with advanced prostate cancer,” said co-senior author of the paper Kenneth Offit, MD, MPH, Chief of the Clinical Genetics Service, head of the Niehaus Center at Memorial Sloan Kettering Cancer Center in a news release. Then relatives could have tests for relevant cancers. Genetic testing is not cost-effective for everyone with prostate cancer or even with metastatic prostate cancer, which is why insurance typically covers only men with a family history of the disease.

Meanwhile, researchers from Rush University Medical Center published a Quiz in the Journal of the American Medical Association based on the case of a woman with endometrial cancer who had a father and grandfather with a form of colorectal cancer called Lynch (Lynch syndrome) (aka hereditary nonpolyposis colorectal cancer). Lynch syndrome is caused by mutations in any of at least four genes that confer up to 80% lifetime risk of colorectal cancer, 60% risk of endometrial cancer, and increased risk of stomach, ovarian, pancreatic, kidney, and prostate cancers.

Lynch syndrome is rare -- only 1 in 35 patients diagnosed with colorectal or endometrial cancers has it. But accompanying the quiz is an editorial whose title says it all:
Lynch Syndrome Testing: A Missed Opportunity in the Era of Precision Medicine. Identifying the mutations behind cancers can inform targeted treatment decisions.

As usual, I just about shut down after perusing the initial flurry of news reports on the NEJM paper. Time heralded a “new genetic test” (no, DNA repair gene tests have been around quite awhile) and The Telegraph headline “Genes which raise risk of prostate cancer discovered by scientists” is also ignorant of cancer gene history. The Washington Post's “defects in genes that are designed to fix damage to DNA” stopped me in my tracks. Genes aren’t designed.

My search wasn’t exhaustive, but I couldn’t find anyone linking the prostate and Lynch papers, nor recognizing their shared ancestry in the 2-hit hypothesis. These days news aggregation leaves no room for history and context, so that’s my contribution for this week.

The two new reports trace their roots back to a 1971 paper famous for describing the first tumor suppressor gene, RB1.

Alfred Knudson, from the Fox Chase Cancer Center, proposed the “2-hit” hypothesis
about the inherited eye cancer retinoblastoma (RB). Work over the previous two decades had attributed cancer origin to a series of mutations, or “hits,” affecting somatic cells.

Knudson examined the medical records of 48 children with RB admitted to M.D. Anderson Hospital between 1944 and 1969, recording whether one or both eyes were affected, the age of the child at the time of diagnosis, gender, number of tumors per eye, and whether relatives had RB. The fact that boys and girls were affected indicated autosomal inheritance, and about 50% of the kids of affected parents were also affected. That indicated dominant inheritance, which means the trait affects every generation.

But something puzzling arose.

In a few families, a child with tumors in both eyes had an affected grandparent, but parents with healthy eyes. Sometimes dominant genes do this, and we call it “incomplete penetrance.” But Knudson saw beyond the label to the mechanism. Perhaps an initial, inherited recessive mutation had to be followed by a second, somatic mutation in a cell in an eye to trigger a tumor. When occasionally this second mutation doesn’t happen, the result is unaffected parents nestled between two affected generations.

Knudson’s 2-hit hypothesis explained another, subtle finding. Children with tumors in both eyes were much younger at diagnosis, some even born with the opaque patches in the eye that reflect light strangely, often the first hint of a problem. Early onset makes sense if a child is dealt a mutation in one copy of the RBgene at conception and then acquires a somatic mutation in the second copy of the gene in a cell in a retina. But two somatic mutations happening in the same cell would take longer. In other words, in inherited RB, a child is born halfway to cancer – one somatic mutation in the eye is all that’s needed for a tumor to form. The risk is so high that tumors often develop in both eyes. In contrast, the one-eye, noninherited form appears later in childhood because it takes longer for somatic mutations to occur in both copies of the RBgene in the same cell.

The two BRCA genes associated with breast, ovarian, and other cancers are also tumor suppressors. People at high risk, such as Angelina Jolie, have inherited that initial mutation – like Knudson’s young kids with both eyes affected. Acquiring the second mutation is often just a matter of time. The two new studies indicate that testing for the implicated genes is a good idea for relatives of people with metastatic prostate cancer or Lynch syndrome.

“THREE STRIKES TO CANCER”
The 2-hit hypothesis remains a classic in genetics lore, although we now know the full picture for some cancers is more complex as a series of driver mutations and an expanding number of implicated pathways as disease progresses. A terrific paper, “The Path to Cancer – Three Strikes and You’re Out” , from Bert Vogelstein and Kenneth Kinzler, imposes genetic structure on the three major stages of cancer: the initial breakthrough of the first driver mutation, expansion fueled by a second driver mutation, and invasion as a driver activates an entire pathway. And cancers are increasingly being classified by mutation as well as location.

Notably, “metastasis” doesn’t have its own stage because the mutations that drive it are probably already in place early on – and that’s exactly why the two new reports are so important. Checking the relatives of patients likely to have germline mutations in DNA repair genes may prove to be life-extending or even life-saving.