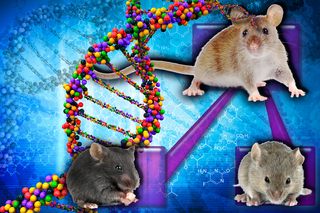 Not always. Sometimes we can actually learn more when an animal is not a perfect model; their good health can reveal new points of intervention. That’s the case for cystic fibrosis, according to findings published in Science. Mice with cystic fibrosis (CF) that do not develop airway infections hold a chemical clue to how people with CF might do the same.

BEASTLY STAND-INS
Some animal models are better than others. Golden retrievers get muscular dystrophy much as we do, and sheep are stand-ins for kids with the CLN6 “late-infantile” form of Batten disease.

Despite the scores of mouse varieties used in biomedical research, mice do not live long enough to mimic some late-onset neurodegenerative disorders. For example, they may die before certain symptoms of Huntington disease (HD) typically appear in humans. That’s part of why compounds such as Riluzole, remacemide, and CoQ10 that are promising in mice didn’t fare so well in clinical trials for treating HD.

The classic example of a disease that is different in people and chimps isn’t a single-gene condition but an infectious one – AIDS. Chimps infected with simian immunodeficiency virus (SIVcpz), which is ancestral to HIV, do not develop the immunodeficiency. Thanks, chimps.

ACIDIC AIRWAYS
In CF, differences between humans and mice stem from the airway surface liquid (ASL). This fluid separates cells lining the respiratory tubes from inhaled air and the microbes sniffed in with it. Outposts of immunity lie in wait on airway surfaces for pathogens, including antibacterial molecules, wandering macrophages that swallow up invaders, and waving cilia that move pathogens up and out.

A healthy human respiratory system mounts a formidable defense. In CF, that shield breaks down, or is never present.

The physiological consequences of inheriting two pathogenic mutations in the cystic fibrosis transmembrane regulator (CFTR) gene are complex. Chief among them are respiratory infections that are rare in healthy lungs, such as Burkholderia cepacia – if you’re human. When mice with knocked out CFTR genes were created shortly after discovery of the gene in 1989, it was surprising that they didn’t contract the lung infections that we do. Researchers soon discovered that the protection was more profound than differences in cell types and distribution in the airways might suggest.

Michael J. Welsh, MD a Howard Hughes Medical Institute Investigator and his group at the University of Iowa discovered in 2010 that pigs with CF develop lung infections shortly after birth, providing a good model for the human situation. Then in 2012 they found that pigs have a disrupted ability to control pH in the airway surface liquid.

AN IMPAIRED PUMP
In the new work, Dr. Welsh’s group found that mice better counter the acidity of the ASL than can pigs or people. How?

It turns out that mice don’t make nearly as much of an enzyme (adenosine triphosphatase, or ATP12A) that we larger mammals do. The enzyme works as a proton pump in overdrive, causing carbonate ions to accumulate, which lowers the pH of the critical fluid interface. The acidity compromises the immune response. (Description of mice with mutations in ATP12A list only its effects on the colon – diarrhea or constipation.)

The evidence for the role of the altered pH in the respiratory tubes is elegantly complementary. Lowering levels of the enzyme in pig and human airways raises pH and restores immunity against lung-loving bacteria, shown in airway epithelium in vitro and in piglets and human babies. And raising levels of the enzyme and thereby lowering pH in mouse airways impairs their immunity.

Of course it’s a long way from mouse airways to helping people with CF, but with costs of the new drugs what they are, any new potential pathway is worth exploring. Plus, a drug to counter the overactive proton pump might help CF patients beyond the ones whose genotypes respond to Kalydeco.

According to Dr. Welsh, the only candidate drug so far is ouabain, which is related to digoxin. “Ouabain and digoxin have the advantage that they are already used clinically - for cardiac indications. But they have the disadvantages that they are more potent inhibitors of the sodium-potassium ATPase than of ATP12A and thus could have adverse effects, and they would require administration by inhalation.”

MISLEADING MICE
Like many science journalists, I hate news releases that proclaim some fabulous new treatment, delaying to the fourth or fifth paragraph that the findings were in non-human animals, typically mice. (The news release that inspired this post though is accurate if unsexy: “Mechanism explaining respiratory infections in CF.”)

It’s especially vexing when news aggregators parrot the first few paragraphs of a news release that buries the mice, without considering the actual research report or getting an outside opinion. I suspect many readers skimming through first paragraphs on Facebook can’t tell the difference.

That’s what happened last week, when a powerful headline about an impending cure for Alzheimer’s disease popped up on my Facebook feed, with near-instantaneous comments proclaiming great joy and answered prayers, clearly unaware that the findings were in mice. It’s cruel. (I also detest the phrase “humans and animals,” as if we are fungi.)

The flip side of presenting non-human animal data as clinically significant is ignoring too-healthy animal models – as this terrific new paper illustrates. How many great stories are missed because the animal models, on the surface, aren’t just like us?

This post first appeared at DNA Science at Public Library of Science.
Be the first to comment