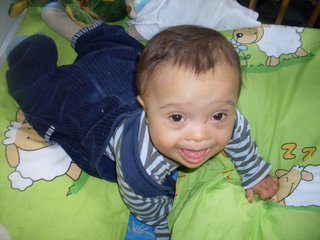 Last week, several people sent me a perspective piece by bioethicist Art Caplan published in PLOS Biology, "Chloe’s Law: A Powerful Legislative Movement Challenging a Core Ethical Norm of Genetic Testing." The concise and compelling article considers legislation to mandate that genetic counselors talk to their patients more about positive aspects of having a child with trisomy 21 Down syndrome.

WHAT’S THE CONNECTION?
Studies show that as availability of prenatal screening (for risk) and testing (for diagnosis) for the condition have increased, births of affected children have decreased. That is, most pregnant women who learn that the fetus has trisomy 21 Down syndrome end the pregnancy. Yet genetic counseling is, historically, largely value-neutral or “non-directive.” Offer the medical facts, explain how tests work and what results mean, listen, and try to intuit the patient’s views to guide word choices. ("Termination" vs "abortion," for example). Answer questions, but don’t try to sway clinical decision-making.

At least two hypotheses can explain the declining numbers of newborns with trisomy 21.

#1: Genetic counseling is influencing decisions to end affected pregnancies. That’s the assumption behind the legislation that Dr. Caplan discusses.

#2: Parents-to-be and the general public do have access to a great deal of information about Down syndrome and many of them make informed choices. They are electing not to bring children into the world who would face a high likelihood of having certain medical and cognitive problems.

I concur with Dr. Caplan that mandating genetic counselors to more positively spin life with trisomy 21 Down syndrome may obscure the medical and scientific facts, misleading patients.

My PLOS editor asked me to weigh in on the matter, and I can, from two perspectives that complement Dr. Caplan’s. I’ve been providing genetic counseling since 1984 for a private ob/gyn practice, and I’ve written eleven editions of a human genetics textbook for non-science majors, starting in 1993.

Throughout the 1980s and 1990s, I often met with women who were of “advanced maternal age” (35+) explaining the benefits and risks of having the invasive procedures amniocentesis or chorionic villus sampling (CVS) to check fetal chromosomes. But since the Internet arrived, I do very little counseling of this type because patients can learn much of what I’d tell them on their own. Today patients can know more about genetics than their physicians.

TRISOMY 21 THROUGH 11 EDITIONS
The editions of my textbook chronicle the possible link between the increase in prenatal testing and the shrinking population of people with trisomy 21. Each new edition arises from updating and a wealth of feedback: from instructors and students, from researchers I interview, essays contributed by families, and most importantly, what I’ve learned at professional meetings, where talks can be months ahead of publications.

Like genetic counseling, textbook coverage of trisomy 21 already presents the negatives and positives.

Most of my book's information about trisomy 21 is under the heading “Abnormal Chromosome Number.” I can’t be politically correct about that – normal means “common type” and an extra chromosome is not common. The section expanded abruptly at edition 4 (2001) as chromosome maps filled in with findings from the first sequenced human genomes. But the introduction remains historically accurate, even if the language is offensive today:

“The characteristic slanted eyes and flat face of the Down syndrome patient prompted Sir John Langdon Hayden Down to coin the inaccurate term ‘mongolism’ when he described the syndrome in the 1880s. As the medical superintendent of a facility for the profoundly mentally retarded, Down noted that about 10% of his patients resembled people of the Mongolian race. The resemblance is coincidental. Characteristic facial features are associated with many inherited disorders. Males and females of all races can have Down syndrome.”

Early editions then described the signs and symptoms, followed with: “These people tend to have warm, loving personalities and enjoy art and music. Intelligence varies greatly, from profound mental retardation, to those who can follow simple directions, read, and use a computer. One young man with Down syndrome graduated from junior college; another starred in a television series.”

In the mid editions I added comments from parents that addressed the subtleties of the condition. “He once dialed 911 when he stubbed his toe, because he’d been told to do just that when he was hurt,” one mother told me. I chose photos that showed young people with Down syndrome doing things – cooking, painting, reading, a little girl banging a toy xylophone. But then I had to respond to reviewers' criticism that students couldn’t distinguish the “stories” from “what they had to know for the test.” Gradually, the human details that I so love to write about became boxed readings, captions, and tables.

Responding again to reviewer feedback, I shortened coverage of what parents can do to help their child, instead focusing on the science. Edition one mentioned the value of hanging a colored mobile over a child's crib. That went. Edition eleven explains how researchers have harnessed X inactivation to shut off the extra chromosome 21 in cells of people with Down syndrome, providing a new way to study the pathogenesis. But I never sacrificed the humanity. Opposite a figure on the new technique a photo shows a young woman intently painting a portrait of a tree. The caption: “Many years ago, people with Down syndrome were institutionalized. Today, thanks to tremendous strides in both medical care and special education, people with the condition can hold jobs and attend college. This young lady enjoys painting.”

I often give patients pages from my textbook, because it offers both sides. The coverage has always included the hard facts that genetic counselors impart: “About half of babies with Down syndrome die before one year of age, often due to malformations of the heart or kidneys. Other patients must undergo heart surgery or suffer often from common illnesses.” Complications also include poor immunity, intestinal blockages, increased leukemia risk, and the high risk of developing Alzheimer disease in later years. But then the balance: “However, some people with Down syndrome are relatively happy, healthy children and young adults. Unfortunately, the test that diagnoses Down syndrome in a fetus cannot detect how severely affected the child will be. The decision of whether to terminate such a pregnancy or raise a child with Down syndrome is very difficult.”

The book is more about the science than counseling, explaining chromosome imbalances and the puzzling maternal age effect. We’ve come far from the 1909 study that blamed “maternal reproductive exhaustion.” And the list of genes implicated in the syndrome has grown as the human genome has given up more of its secrets. Before that, we could only deduce the responsible genes from individuals who had partial third copies of chromosome 21.

Bioethics explosively entered the Down syndrome coverage in edition 9 (2010). A boxed reading analyzed a study from Denmark cited in Dr. Caplan’s article. Government researchers there tracked trisomy 21 cases after broadening availability of screening and diagnostic testing. From 2000 to 2006, the number of affected newborns was halved, those diagnosed prenatally increased by nearly a third, and the number of diagnostic tests (CVS and amniocentesis, which are more invasive than maternal blood test screening) fell by half.

The trisomy 21 story really changed in the current edition, with the boxed reading “Will trisomy 21 Down syndrome disappear?” It considers the impact of cell-free DNA screening for fetal DNA in the maternal bloodstream. Available since 2011, it’s leading to diagnoses in women under 35, while enabling many pregnant women over 35 to avoid invasive tests. The box quotes two New Zealand researchers who published a paper in May 2013 that enraged several groups into demanding the bioethicists' resignations. To quote from the paper would be out of context. But they say what I suspect at least some genetic counseling patients are thinking when weighing their options and choosing to end pregnancies to avoid the possible medical risks and realities of Down syndrome.

In the 12th edition of my book, I’ll discuss legislation, like Pennsylvania’s Chloe’s Law, that Dr. Caplan so artfully describes. I agree with him that if laws compel genetic counselors to talk more about the happy healthy xylophone-banging little children, and less about the toddlers who sport scars from heart surgeries or develop leukemia, patients might leave counseling sessions with skewed views of life with an extra chromosome 21.

(This post first appeared as my weekly DNA Science blog at Public Library of Science.)
1 Comments

Unfortunately, when reproductive politics override practical, reasoned, nuanced counseling advice given with the best of intentions, this sort of law results. Depending on wording, either end of the "Rights" spectrum could be favorably biased, with the real life consequences of hapless families and children forgotten. Guidance counselors in the 1960's were quite different from those today, but all have had ideas about individual rights, pursuit of happiness, balanced with societal interests,inevitably biasing the most earnest intentions. Genetics counseling presupposes awareness of percentage risks, trade-offs, and legal ethics, with the personal beliefs and mores of the family likely having final word in decisions. It is hard to see how clear-eyed assessments of financial hardship, lifelong care factors, emotional stresses on both family and children, etc. are unfair or unbalanced, while anecdotal accounts of unexpected survival, or success, or triumph are not exaggerating a positive outcome against the odds. The ideal counselor may never be unbiased, but should have as much information as possible representing all aspects of a case, in order to answer questions and calm the consciences of all deciding parties, so afterwards there is the least likelihood of second-guessing, doubt, recrimination.
There is a subtle agenda perhaps within, as if Down's syndrome advocates are fearing the loss of their focus group. The right to have a child is very different from a right to be born, some time in the future.