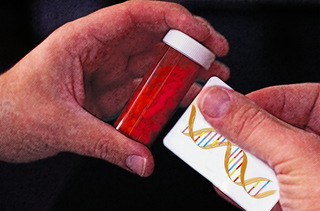 (NHGRI)
I fear that news out today about gene therapy to treat a form of childhood blindness will be unnecessarily negative. Because I wrote a book about this treatment, “The Forever Fix: Gene Therapy and the Boy Who Saved It” and am Facebook friends with many affected families, I want to add context to the news coverage.

Two papers, Jacobson et al and Bainbridge et al in the New England Journal of Medicine today report follow-up results on gene therapy performed since 2008 for RPE65-associated Leber congenital amaurosis, or RPE65-LCA for short. The measurements and imaging show a continual degeneration of the photoreceptors (rods and cones) despite the fact that many patients became able to see for the first time and some still do. One of the research groups reported initial findings of continued disease in 2013 (see my post about it, which includes several expert opinions).

But numbers and scans aren’t the only ways to assess visual function. A formerly blind child who can now ride a bike, step off a curb unaided, or see a sibling’s face should count too, even if the ability wanes.

LIMITATIONS OF THE STUDIES
Tracking continuing disease despite obvious clinical improvement is important in making a treatment the best it can be. I spoke with Jean Bennett, MD, PhD, who leads the gene therapy trial for RPE65-LCA at Children’s Hospital of Philadelphia (CHOP), where results do not indicate continued degeneration, and with Eric Pierce, MD, PhD, who worked with Dr. Bennett on the early trial and is now at the Massachusetts Eye and Ear Infirmary. They add perspective to the news by pointing out where caveats and explanations of study design might help in interpreting the findings.

• The number of patients followed in the two new reports is very small (3 of 15 in one study, 12 in the other) and only a tiny portion of the retinas were examined.

• The Jacobson paper compares treated eyes to historical samples, not to the patients’ untreated eyes, which would control for individual differences in the rate of degradation as the disease progresses and for normal aging.

• Retinal sensitivity at 6 years is still considerably higher than before treatment. The intervention works.

• Many patients see when they didn't before gene therapy, even if tests such as electroretinography and optical coherence tomography (OCT) reveal impaired photoreceptor function and degeneration.

• Bainbridge et al used a promoter (a DNA sequence that controls the rate of gene expression) that wasn’t as powerful as the CHOP one, necessitating higher doses that may have caused the inflammation seen in some patients and contributed to delayed response and diminished efficacy.

A TREATMENT IS NOT A CURE -- SO WHAT?
An editorial in the NEJM by Alan F. Wright, MD, PhD of the MRC Institute of Genetics and Molecular Medicine at the University of Edinburgh sets a negative tone: “Without a highly efficient vector delivery system and sufficient surviving retinal pigment epithelium and photoreceptors, treatment success will be transient.”

But it's ok for a treatment to be transient!

My mother underwent surgery, chemo, and radiation for breast cancer that wasn't a cure, but it bought her 17 years. Drugs to treat diabetes, hypertension, acne, you name it, aren’t a one-shot deal. The term "forever fix" in my book was meant to be figurative.

Dr. Pierce compares the trajectory of gene therapy to that of penicillin. “When it was introduced in the 1940s, not everybody responded, and we learned over time that we use different doses and routes of administration to treat different diseases. Should we have given up on penicillin? Call it bad because it didn’t work on everyone the first time we tried it? We needed to learn to use it effectively and develop additional antibiotics to treat what penicillin doesn’t. It will be the same story for gene therapy.”

Adds Dr. Bennett, “It would be naive to think that any drug is going to work perfectly all of the time. And it is also naive to think that we can immediately turn someone who is severely visually impaired to someone with 20/20 vision. We are still learning about the variables that determine success.”

Dr. Pierce thinks that the findings are going to make gene therapy better in the long run. "People have been trying to develop treatments for LCA and related inherited blindness for 100 years. Nothing has ever worked before and here are the first set of therapies that actually work. It is still a huge advance, but we need to perfect it.”

Given the difficulties of vector design and the pace at which gene therapy experts are learning to improve delivery, starting over would set the clinical trial clock back a good 15 years, Dr. Bennett says. Spark Therapeutics has formed to commercialize the gene therapy developed at CHOP, and several success stories are on their website. Dr. Bennett and her husband, ophthalmologist Dr. Al Maguire, who performs the procedures, have waived all rights to profit.

A PARENT'S VIEW
So what’s wrong with a treatment that must be repeated every few years in order to give a child sight? Nothing at all, says Kristin Smedley, a mom of two profoundly blind sons who would give anything for the chance at gene therapy. “Until other therapies are available, gene therapy is the best hope right now for my boys. Even if this approach only restores a fraction of vision, that fraction could mean no longer needing a cane to navigate or being able to read print instead of Braille.”

The Smedley family's form of LCA is caused by mutation in a gene called CRB1. In March I attended the annual gala for their Cure Retinal Blindness Foundation. During the cocktail hour, someone was singing at the piano, “Born to Run.” I turned to my husband.

Michael Smedley did. Blindness hasn’t stopped him from being a musician, an actor, and an athlete. And he may one day see; gene therapy for CRB1-associated LCA is on Dr. Bennett's short list.

I applaud all of the researchers who have paved the way for what is now more correctly being called "gene augmentation therapy" (to distinguish it from the more controversial genome editing) by giving the gift of sight.
4 Comments

Plz tell me there has treatment available for my child she is 5 yrs old.

What is her exact diagnosis?

Hi Ricki,
Are there any options for my teen daughter diagnosed with RP?
Her affliction is apparently caused by: "Gedi testing had identified a homozygous mutation in MERTK for the proband". May I solicit your help if you are in the know of any active research wrt to these variants and any therapy being developed?
Regards
Biju

Go to clinicaltrials.gov and enter retinitis pigmentosa and the mutation. You'll get a list of clinical trials from all over the world. If it says "Recruiting" it means they're taking patients. Read the description of each trial you find -- make sure it is the right gene -- to the end, and there will be the name of someone you can email. These people are generally wonderful and will get back to you. Good luck! If you need further help let me know and I'll look around too. There's also a good website called RetNet.