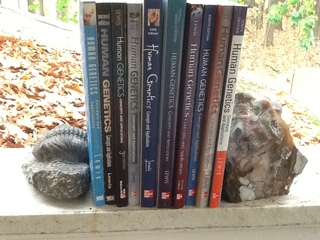 10 editions of my textbook chronicle the evolution of genomics
This month we celebrate the DNA anniversaries: unveiling of DNA’s structure in 1953, and the human genome sequence in 2003.

From now until DNA Day, April 25, bloggers will be worshipping the human genome. Nature will offer podcasts (“PastCasts”) and last week, Eric Green, director of the National Human Genome Research Institute, spoke to reporters, summarizing the “quantitative advances since the human genome project.”

It’s also the 20th anniversary of my non-science majors textbook, Human Genetics: Concepts and Applications. Writing the 10 editions has given me a panoramic view of the birth of genomics different from those of researchers, physicians, and journalists. Here are a few observations on the evolution of genetics to genomics, as I begin the next edition.

A LONG AND WINDING ROAD
My textbook almost didn’t happen. Back in 1980, when I pitched it to the acquisitions editors descending on the zoology department at Miami University, no one cared.

“Human genetics? How about intro bio? Not enough sales in genetics.”

In 1992, the year my intro text was finally published, I found myself next to my favorite editor at a dinner. Human genetics had recently edged onto the editorial radar, thanks to media attention to the fledgling human genome project. I scribbled a table of contents on a dinner napkin, which served as a makeshift contract, and soon the project was a go. But the publisher still thought of genetics as an obscure outpost of academia, so the editors left me pretty much on my own.

I’m a storyteller, and so from the beginning, the textbook featured true tales from families with genetic diseases: A mom whose 5-year-old died from missing part of chromosome 5; a young man with XXY syndrome; and a 16-year-old wondering why attendees at an exhibit on spina bifida at a local science museum voted that people with this condition, which he has, should never have been born. Including the voices of real people added so much humanity to the textbook – the competitors tended to feature white male scientists – that one critic accused me of “writing like a woman.”

When I wrote the first edition, I couldn’t have imagined that the exome – a term not yet invented – would one day be sequenced from DNA in a spit sample, and sent, for $99, to an also-not-yet-invented web-based company. And according to the NHGRI, sequencing a human genome, which initially took 6-8 years and about a billion dollars, now can be done in a day or two for $3,000-$5,000.

GENETICS HEADLINES 20 YEARS AGO
What else was happening, and hadn’t yet happened, in human genetics when I wrote the first edition, circa 1992?

• The Huntington’s disease mutation had just, finally, been discovered, after a decade-long "chromosome walk" from a marker out on the tip of chromosome 4.

• Gene therapy basked in the afterglow of the first clinical trial, to treat an immune deficiency; 18-year-old Jesse Gelsinger hadn’t yet died from gene therapy for a urea cycle disorder, which derailed the field. The first FDA approval for gene therapy in the US may come this year, marking another “3” year in the history of genetics.

• The Human Genome Project, public consortium version, was getting underway, but the Celera Genomics team didn’t exist, as such.

• The first genome of a free-living organism had yet to be sequenced – that would happen two years later.

• The film GATTACA was four years away from dramatizing a society crippled by misuse of genetic information.

A look at Nature Genetics from September 1993 reveals the state of genetics.

The lead editorial probed the now infamous paper by Dean Hamer from the National Cancer Institute introducing what would become known as the gay gene on the X chromosome, ushering in the era of genetic determinism. Other articles mapped genes for infertility, migraine, and an assortment of rarities. A study about a baby with “leprechaunism” caught my eye – it’s been deemed offensive since then and is now called Donohue syndrome. That will probably soon become something about an insulin receptor gene mutation, following the trend to get away from eponyms.

Over the editions, the number of genes fell by an order of magnitude, from 200,000 to about 20,300 today. Other things increased. Today we recognize more types of RNA, species of Australopithecus, cancer-causing genes, sequenced genomes (humans and others), and genome regions that don’t encode protein.

PAST EXCEPTIONS ARE TODAY’S NEW RULES
As genetics has become genomics, the focus has shifted from the traditional study of diseases and mutants towards normal function and inherited variation.

Some chapters grew so large with all that added normalcy that they split, like giant amoebae redistributing their biomass into two individuals. “Multifactorial Traits” spun off “Behavior,” and “DNA Action” (the trek from DNA to RNA to protein) begat “Gene Expression.”

I’ve long wondered what to do with Gregor Mendel. Pea plant experiments may seem archaic, but I apply the laws they revealed whenever I counsel a couple about their chances of having a child with a single-gene disease. Yet responses to my Scientific American blog on what the heck to do with Mendel argued for minimizing him.

The problem isn’t the stretch from peas to humans – it’s more that the either-or simplicity of Mendel’s laws isn’t very helpful in the clinic, where individual genes do not operate as autonomously as a pea plant with wrinkled or smooth seeds.

The oddities no longer considered odd are the forces that alter how we experience single-gene traits and illnesses, such as the environment (epigenetics) and other genes. These factors explain why some people with disease-causing mutation combinations don’t get the disease (“incomplete penetrance”) and why some mutations cause differing degrees of illness in different individuals (“variable expressivity”). Complicating diagnosis is “genetic heterogeneity,” when mutations in more than one gene cause a disease or trait, and “phenocopy,” when an environmentally-caused condition resembles an inherited one.

ALLELIC DISEASES – WE STILL DON’T UNDERSTAND SINGLE GENES
Edition #10 (2011) introduced yet another complexity lurking in simple Mendelian genetics -- allelic diseases. That’s when different mutations in the same gene cause different diseases, depending upon the gene part and body part affected.

I started thinking about allelic diseases before they had a name. Once the cystic fibrosis (CF) gene was discovered in 1989 and researchers identified hundreds of mutations, clinical variations could be detected. Most people have the classic lung and pancreas symptoms, but some people only have frequent sinus infections or bronchitis, and men may have only infertility. These manifestations are all considered to be CF. Yet different mutations in the beta globin gene had been known for decades, and the diseases that they cause considered to be separate clinical entities, such as sickle cell disease, methemoglobinemia, and beta thalassemia. Why aren’t the distinctive guises of CF considered separate illnesses, too?

By the time I was writing the 10th edition, allelic diseases had started to accumulate, and they grew more and more intriguing. One mutation in a gene greatly elevates risk for Alzheimer disease, yet another variant of the same gene causes severe acne. The gene that causes Menkes disease, with its trademark ultra-kinky hair, lies behind peripheral neuropathy too. Marfan syndrome can also be stiff skin syndrome. The inborn error Gaucher disease (glucocerebrosidase deficiency) shares a gene with Parkinson’s disease.

The list of allelic diseases is growing. Finding the underlying commonalities among these peculiar pairs of illnesses may reveal shared mechanisms and potential drug targets. But the subtler lesson is that while the news is full of sequencing genomes, we haven’t yet figured out all the relationships among the variants of well-studied genes.

GENETIC TESTING
Perhaps the most astonishing evolution has been in genetic testing; it starts every edition of my textbook.

Edition #1 opened with the story of how a mother’s astute observation that her children’s pee smelled weird led to development of the diet to prevent symptoms of phenylketonuria (PKU). It’s still one of the best single-gene stories because it has a happy ending.

Editions #2 and 3, from 1997, looked ahead a few years to fetal testing that was just becoming widely used. Edition #4, from 2001, introduced college students Mackenzie and Laurel, named for soap opera characters. In each subsequent edition, they took a changing menu of genetic tests, laying the groundwork for the genetic testing that exploded from the clinic to spit-in-a-tube direct-to-consumer testing in 2008.

I invented Laurel and Mackenzie, although the tests they took in the first pages of each edition existed. Gradually descriptions of the first real sequenced human genomes began to appear, but I put them in the final chapter, on genomics. Edition #9 featured the first three genomes, from Craig Venter, James Watson, and “YH,” a Chinese man. Said Dr. Venter at the 2008 annual meeting of the American Society of Human Genetics of his and Dr. Watson’s genome results: “You probably wouldn’t suspect this based on our appearance -- we are both bald, white scientists.”

The current edition ends with the genome of Stephen Quake , a pioneer of high-throughput DNA sequencing and one of the first to talk about his genome. In the 3 years since I wrote that, articles and books discussing someone’s genome seem to appear on a weekly basis.

What will I do for edition #11? By the time it’s published, genome sequencing will certainly be available for under $1,000, and will be well on its way to becoming part of standard health care. It’s hard to believe that in just 20 years, coverage of human genome sequencing in my book grew from a brief boxed reading, to part of a chapter on gene mapping, to its own chapter.

But now, as I embark on edition #11, I might shrink or drop the “human genome” chapter altogether, for it has now become a lens through which we must view every other aspect of the science we once called genetics.
Be the first to comment