Sex and the Single Slime Mold 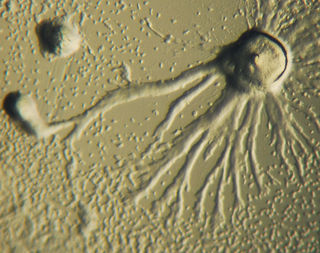 When their bacterial food is scarce, single Dictyostelium cells send signals drawing thousands of cells together, forming a mobile slug. (Wikipedia).
Among the scintillating science headlines this week was a report on the sex life of the sea slug Siphopteron quadrispinosum in PLoS One, complete with a compelling photograph of the dually-endowed hermaphrodites caught in the act. The slugs are too violent for me. If I could emulate the life cycle of any species, it would be Dictyostelium discoideum, the “social amoeba.”

The sea slugs are about equally divided into individuals who act like males and females at the same time, and those who choose sides, with a few more males than females. Those who stay female tend to get hurt during the 20-minute sea slug sex act. In other species, this sort of risk makes females avoid sex, but female sea slugs submit to the dual-penile assault once or twice a day – a lot more than what’s required to perpetuate the species.

So why do female sea slugs put up with this “male coercive strategy?” There must be something valuable in the hard-won ejaculate, hypothesize Rolanda Lange and her colleagues in the Animal Evolutionary Ecology Group at the University of Tuebingen in Germany.

The researchers collected the little beasts from Loomis Beach on Lizard Island in Queensland, Australia, and set up seductions (“experimentally imposed mating opportunities”) at different rates, to see what would happen. The primary metric was spawn size.

Most of the participants preferred an intermediate mating frequency, when a lower one would have been sufficient. The various news reports regarded this as odd, but the finding is actually consistent with balancing (natural) selection, which maintains an intermediate phenotype – such as body weight – because individuals at the extremes for the trait are not as fit in a Darwinian sense (reproductively successful). For the sea slug women, doing it too often, what with all that skin piercing, could wear them out, as happens to bed bugs. And doing it too infrequently might not capture enough sperm.

To try to fathom why female sea slugs put up with “forcible rape,” to borrow a recent political tautology, I consulted my friend and sexpert Helen Fisher, author of several love books, the most recent of which is "Why Him? Why Her?: Finding Real Love by Understanding Your Personality Type" and inventor of chemistry.com.

Being an anthropologist, Dr. Fisher sees things from a hominid’s perspective rather than that of a slimy, double-penised invertebrate’s. “The ability for constant sex probably evolved with pair-bonding some 4 million years ago, as a means to cement the primary relationship, and to have sex on the side to enlist more males to help provide and care for young. This was the beginning of the basic dual human reproductive strategy of monogamy and clandestine adultery, a pattern we see around the world today.”

I’m not sure if sea slugs have relationships and affairs, but if I had a choice, as I said, I’d pick the cellular slime mold. Consider its life cycle.

“Dicty” lives in 3 ways: vegetative, sexual, and social. Usually the vegetative slime molds go on happily in their unicellularity, tucked under forest litter, until its bacterial food supply runs out. These asexual cells, aka amoebae, divide by mitosis. Unless the environment changes – like food disappearing – they continue, for stasis is the hallmark of asexual reproduction. If it ain’t broke, don’t recombine or mutate.

With food gone, Dicty follows either of the other routes. Some amoebae specialize as opposite mating types, which fuse and swap DNA, creating new combinations of gene variants that might survive, perhaps by finding a new food source. Mixing up DNA is the essence of sex, not the act itself. In another mysterious ritual, the sex cells cannibalize other cells around them, which secrete a cellulose wall that surrounds the entire sexual being, now called a macrocyst. It bursts, unleashing a flood of genetically diverse amoebae.

In the third life strategy, the social approach, threatened asexual amoebae shoot out signals, attracting everyone to join forces. Up to 100,000 or so of them meet up and coalesce. The ensuing developmental stages have vivid names: first they form a mound, then a finger, then a mobile, gelatinous slug that seeks light and heat, hunting for food.

When a slug on the move finds a spot packed with bacteria, it stops. The slug undulates, and soon its center begins to telescope upward, forming the “Mexican hat” stage. The hat elongates into a “fruiting body” of some 20,000 cells that sacrifice themselves, forming a base and stalk that the rest of the cells ascend. Successful cells that make it to the top cloak themselves as spores, then disperse and rain down, starting the cycle anew, spawning asexual amoebae in the newfound land of plenty.

The cellular slime mold’s existence is an elegant balance of the unicellular and multicellular, the asexual and the sexual. Here’s what we can learn from it:
• If things are going okay, don’t change them.
• Novel combinations of existing capabilities may reveal new strengths and opportunities.
• Survival requires cooperation and sacrifice.
• All lifestyles are valid and useful.

Ricki...what if the missing link was the Y chromosome was really suspose to be an XX male chromosome...then males and females would be xxxx..with..yyyy in each. The selection of the maleness or femaleness would come from the brain. I truely think the violence and aggression would be evolved out I think denisovan will assist with this research.