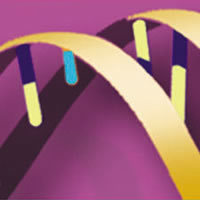 (credit: Dept of Energy)
Earlier today, my “in” box began to fill with info from everyone I’ve ever met letting me know that the Supreme Court had ruled on the Myriad case about patenting the breast cancer genes BRCA1 and BRCA2. I also received a dozen pitches from PR people offering me all manner of instant interviews with lawyers, doctors, bioethicists, and health care analysts.

No one offered me an interview with a geneticist – a person who knows something about DNA. So being such a person myself, I decided to take a look at the decision. And I found an error right smack in the opening paragraph:

“Scientists can extract DNA from cells to isolate specific segments for study. They can also synthetically create exons-only strands of nucleotides known as composite DNA (cDNA). cDNA contains only the exons that occur in DNA, omitting the intervening introns.”

I suspect most of the media didn't notice the incorrect reference to the "c" of cDNA, but I could hear the collective cringe of biologists and biology students everywhere. The definition is correct, the terminology, not. “cDNA” does not stand for “composite DNA.” It stands for “complementary DNA.” The document gets it right a little farther on. And I rather like the term “composite DNA,” but it’s confusing to introduce a new term in science when we already have one.

cDNA came into fashion when I was in grad school, circa 1977. Like many genetics terms, it has a very precise meaning, something I pay attention to because I write human genetics books.

A cDNA is termed “complementary” because it is complementary in nucleotide base sequence to the messenger RNA (mRNA) that is made from the gene. Enzymes cut from the mRNA the sequences (introns) that do not encode amino acids and retains those (exons) that do encode protein. So a cDNA represents the part of a gene that is actually used to tell the cell to make protein.

A cDNA is created in the laboratory, and it is not a DNA sequence that occurs in nature, although its parts do. Hence, the Supreme Court’s part 2 of the decision, which acknowledges Myriad’s right to use a test based on a complementary, or cDNA.

I did a google search for “composite DNA” and just found the media parroting of today’s decision, and a few old forensics uses with what I think is a different meaning. So a caveat: my conclusion that the term is incorrect and invented is based on negative evidence. If I’m wrong, mea culpa in advance and I will feel like an idiot.

Today’s decision is undoubtedly a wonderful leap forward for patients, their families, and researchers. But the science in something as important as a Supreme Court decision, especially this one which will have ripple effects throughout biotechnology and health care, should accurately use the language of the field under discussion.

A longer version of this post appeared an hour after the decision came out, at my DNA Science blog at Public Library of Science.
1 Comments

Thanks Carla! That blog post is memorable because my daughter was very ill and I was with her in the hospital as she was being rehydrated. The decision came out and my editor emailed me asking that I write it up, and I read the decision right there in the hospital and banged out the post. I'll never forget it! Good luck with your career!