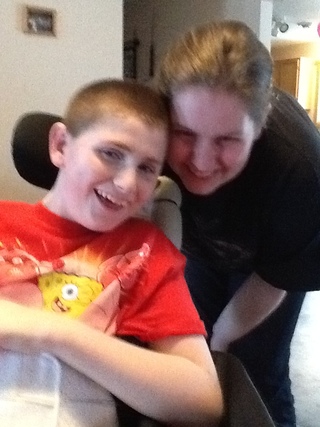 Jordan and Hailey Kohl. Spinocerebellar ataxia type 2 affects several members of their family, including Jordan.
“Anticipation .. is keepin’ me waitin’,” sings Carly Simon in her song made famous in a ketchup commercial. But “anticipation” in the genetic sense is just the opposite of Carly’s croon – it means a disease that begins earlier with each generation.

Doctors once blamed patients for anticipation, as if people with sick older relatives could worry themselves into suffering similarly. Then, in 1991, discovery of a new type of mutation explained the curious worsening of fragile X syndrome: an expanding triplet repeat.

A normal X chromosome has 6-49 repeats of the DNA sequence CCG in a certain section. In boys and men with fragile X syndrome, the vulnerable part of the X has 230-1,000 repeats, crinkling it up so it appears "fragile" when stained, and causing a spectrum of symptoms that include intellectual disability, autism, large testicles, and characteristic facial features. A mother of an affected child has 50-200 repeats, a “pre-mutation” that can grow, when passed on, into the symptomatic range. And in genetic retrospect, an affected boy's grandfather may develop, later in life, a tremor and unsteady gait reminiscent of Parkinson's disease.

Imagine the fourth repeat in one X chromosome lining up against the sixth in its partner. If the chromosomes swap parts – as chromosomes often do – the confusion can lead to ten copies of the repeat on one chromosome. Just like that. Over the generations, as the dance of chromosomes continues, the gene grows. And the amino acid that it encodes comes to be over-abundant in the corresponding protein, gumming up the works of the cell.

Marcia Kohl didn’t need a molecular explanation to know anticipation intimately – she’s lived with it since she met her husband in 1994, and sees it every day in their son Jordan, born in 1998. The family has SCA2, which affects 4 out of every 100,000 people. She shares her story of seeing the anticipation in retrospect:

“My husband knew something was wrong with his family. When we met, his grandma was just getting a wheelchair. She lived into her late 80s. His mom had some of the signs, but she was still working and getting around. His sister had some speech and walking problems, but we didn’t think much of it,” she relates.

In 1995, doctors first used the word ‘ataxia” to possibly describe Marcia’s mother-in-law’s awkward walking and speech. Then the sister joined the military, and when she toppled off the balance beam, she was sent to a neurologist. A DNA test revealed SCA2, passed as an autosomal dominant disease thanks to a mutation on chromosome 12. That meant that each child of an affected individual faces a 50:50 chance of inheriting the condition.

SCA didn’t seem so dire, Marcia recalls, when it only affected family members when they were adults. But her son changed that.

“Jordan was fine until he began learning how to read, and his first-grade teacher noticed that his eyes weren’t moving normally,” Marcia says. The boy was also having difficulty maintaining his balance well enough to ride his bike. “Because two years earlier Jordan's dad was diagnosed with SCA2, everyone insisted that Jordan get tested. I didn’t see the point, because there wasn’t a treatment. But the teacher said it could be something else. It could be a brain tumor and they might be able to fix that. So we had the genetic test done. Jordan was not lucky enough to have a brain tumor.”

Instead, he was diagnosed with SCA2 at age 7 – decades earlier than his dad, aunt, grandma, and great-grandma. “It’s just crazy how each generation has gotten so much younger, and now Jordan,” Marcia says.

The course of Jordan’s illness has been relentless, not the gradual clumsiness that settled upon his relatives. “This disease takes and takes until there is nothing left to take. It started with his balance and coordination. Writing and drawing got difficult. Then he started falling.”

The loss of mobility and independence was devastating for the boy who loved being outdoors. “The hardest thing for him was four years ago when he had to get a walker. He would rather fall than have to use the walker, but then the falls became more frequent and more painful. He has scars all over and twice he chipped out his front teeth,” Marcia says. When he grew too tired to use the walker, he began using a wheelchair.

The pace of the disease has quickened the past year, likely because Jordan has 63 repeats in his gene compared to his dad, who has 54 and his aunt, who has 46. “He no longer can hold his head up. He doesn’t like being hot or cold, or the wind, so he very seldom goes outside. Just 5 years ago I could not keep him in the house,” Marcia says. He also has difficulty breathing, a chronic severe cough, urinary retention, and chronic sinus infection. A tube delivers nutrients to his stomach and small intestine. Jordan can no longer talk.

Marcia is taking life one day at a time, caring for her son and husband. “Every day we try to do something fun, something that Jordan will enjoy. We don’t know what to expect from one day to another or if we even have another day.” Jordan watches TV, listens to music, and likes having books read to him.

Meanwhile, Marcia worries about her 16-year-old daughter, who may develop symptoms.

The song Anticipation begins, “We can never know about the days to come. But we think about them anyway.” Genetic testing for SCA2 indeed allows people to know about the days to come, but incompletely. Detecting a family’s mutation in a person who doesn’t have symptoms, like Jordan’s sister, doesn’t reveal when symptoms will begin or how severe or fast the disease will be. Such predictive testing isn’t advised for family members under age 18, in order not to rob them of the choice not to know. Marcia won’t allow her daughter to be tested, if she wants to be, until she’s 18.

There aren’t any treatments or cures on the near horizon for SCA2, because unstable triplet repeats are not as simple to fix as an errant enzyme that blocks metabolism. The SCA2 gene’s function remains unknown. And so treatment is supportive – assistive devices, special feeding, and lots of love and attention.

One glimmer of hope in the SCA2 picture lies in a more common, yet still rare, disease –amyotrophic lateral sclerosis (ALS or Lou Gehrig’s disease). A report last year in Neurology found the expanded SCA2 gene in half a percent of a large number of cases. When rare diseases can team up, perhaps they will form a critical mass large enough to attract more research dollars.

Ricki Lewis is the author of "The Forever Fix: Gene Therapy and the Boy Who Saved It", to be published soon by St. Martin’s Press.