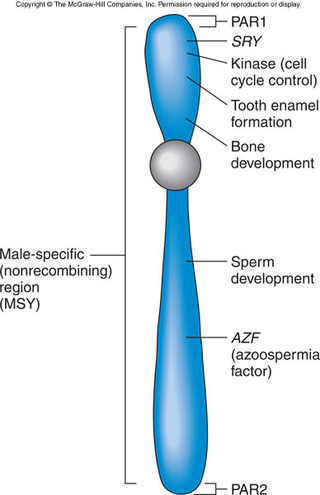 For several editions now, my human genetics textbook has run an “In Their Own Words” essay in which MIT’s David Page, protector of the Y, has defended the measly male chromosome against charges from Jennifer A. Marshall-Graves, of Australian National University, that it is disappearing. She helpfully points out in my book, “You can lack a Y and not be dead, just female,” then goes on to call the Y “a pathetic little chromosome that has few genes interposed with lots of junk.”

It’s no wonder that Dr. Page grew prickly over the matter and has repeatedly spoken up in the name of the sad little glob of DNA that marks the male of the species. Said he in the essay several years ago, “When Jennifer Marshall-Graves and John Aitken wrote that the Y would self-destruct in 10 million years, it truly frightened the people in my lab. We decided we needed to pick up the pace.”

That they did, and Page’s research group indeed then discovered that the Y is riddled with complex repeated sequences that bind like Velcro to each other, enabling the feeble chromosome to swap within itself, keeping itself going.

The new paper in Nature, co-led by Jennifer Hughes, reports that comparing the Y sequences of humans and macaques reveals that since the split 25 million years ago, the human Y has lost only 3% of itself – and so Dr. Page’s fears of the vanishing Y were premature. The human Y still comes up short, in terms of content, compared to the other chromosomes, but at least what it does have is organized in a more complex way than in our simian cousin.

I’m still proud to be an XX.