The Irony of HIV Gene Therapy 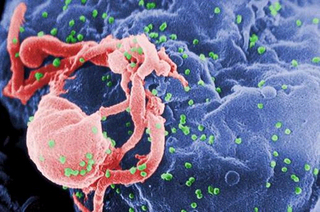 HIV on a human lymphocyte.
Buried somewhere beneath the long-awaited announcement of the birth of Jessica Simpson’s baby on May 2 was encouraging news about HIV infection: gene therapy appears to be safe.

Anti-retroviral drugs (ARTs) have been remarkably successful, but they require daily doses and have adverse effects. Gene transfer is an alternative approach that gives selected cells the genes to manufacture proteins necessary to counter a particular disease. Gene transfer (which technically becomes gene therapy once it works) to treat an enzyme deficiency, for example, provides genetic instructions for the missing enzyme. To treat an infection or cancer, gene therapy bolsters immune system cells.

But using gene transfer to treat a viral infection is ironic, because viruses themselves are used to deliver genes.

In HIV gene therapy, a related virus (gammaretrovirus) shuttles genes into T cells, enabling them to sport an engineered type of receptor built of part of an antibody and a universal signal. The receptors bind the gp120 glycoproteins that jut from the surfaces of HIV-infected cells, destroying them. The gene transfer essentially arms cytotoxic T cells, so that they can rescue infected and doomed helper T cells. Results of an 11-year follow-up to three small HIV gene transfer trials, published in the May 2 Science Translational Medicine, indicate that the approach is safe.

“We have 43 patients and they are all healthy. Out of those, 41 patients show long-term persistence of the modified T cells in their bodies. T cells appear to be a safe haven for gene modification,” says Carl June, MD, professor of pathology and laboratory medicine at the University of Pennsylvania and senior author of the paper. Not only are bolstered T cells persistent, but their numbers increase over time.

The new study wasn’t intended to address efficacy. Demonstrating safety is HUGE in the field of gene therapy, which has a rather checkered past.

For many medical technologies, each step forward comes at the cost of failure. And for treating immune deficiency with healing genes, that failure is a whopper.

In early 2003, just a few months after publishing the very positive results of a gene therapy trial for severe combined immunodeficiency X1 (SCID-X1), a little boy in the trial developed a rare type of leukemia. At first, his case seemed a fluke.

But then a second, and then a third, boy developed the cancer. Ultimately, of 20 treated boys, 17 overcame their inherited immune deficiencies, but 5 had leukemia – and one died of it.

The retroviruses used in the SCID-X1 trial, it turned out, zeroed in on a particular cancer-causing gene in the boys’ genomes, a devastating event called “insertional oncogenesis.” Part of the problem was that the target cells were bone marrow stem cells. These cells divide often, and when they do they lack the nuclear membranes that keep most retroviruses out. Much of their DNA, which is otherwise tightly wound and inaccessible, is stretched out, open for business, making the cells more vulnerable to viral attack than more mature cell types, like T cells.

In the wake of the SCID-X1 problem, FDA ordered that researchers evaluate all participants in all gene transfer clinical trials annually for at least 15 years. And this is what provided the researchers with the data to track the safety of gammaretroviral vectors in the HIV trials begun more than a decade ago.

In hindsight, using T cells, rather than stem cells, made the procedure safer. And since the HIV gene therapy trials started, researchers developed ways to make the part of the gamma retrovirus that inserts into an oncogene “self-inactivating,” building in a fail-safe mechanism. “In preclinical trials, these vectors are 100-1000 times less likely to cause insertional oncogenesis,” says Donald B. Kohn, M.D., professor of microbiology, immunology and molecular genetics and pediatrics at the University of California, Los Angeles, who has led several gene therapy trials.

Even more ironic than using one type of retrovirus (gamma) to fight another (HIV is a subtype called a lentivirus) is that HIV ITSELF is a gene therapy vector. It was used, for example, in successful clinical trials to treat adrenoleukodystrophy, which strips myelin from brain neurons.

The idea to tame and turn HIV into a gene therapy vector dates back to around 1998. Unlike other retroviruses that can only insert into human chromosomes while the cell is dividing and its nuclear membrane temporarily dismantled, a lentivirus such as HIV can infect a variety of cell types, including those not in the throes of division, and can carry a hefty payload compared to other viruses.

Of course using HIV to transport genes into cells faces quite an image challenge. That’s probably why researchers talking to reporters tend to say “lentivirus” rather than "HIV". But even if they did, the fact is, HIV as a gene therapy vector appears to be safe. “There’s fear that the public would think we were giving people HIV. But the virus is disabled front, left, and center. It’s impossible to generate HIV,” says Jim Wilson, MD, PhD, professor of Pathology and Laboratory Medicine at the University of Pennsylvania and editor-in-chief of Human Gene Therapy.

So what’s next for HIV gene therapy? Economics.

For a very rare disease lacking any treatment at all, gene therapy is an obvious way to go. A widespread infectious disease overrepresented in the developing world, like HIV/AIDS, is a different story. If vectors can be manufactured cheaply and the gene transfer given as a simple injection or infusion, perhaps the approach can lower the frequency with which ARTs are needed. Says Dr. Kohn, “A decades-long or permanent effect could cost what a year’s drugs cost.”

And so we will continue to fight HIV as an infection, and tame it as an emissary of gene therapy.

Well, I noticed the news story in spite of Jessica & baby, and it blew me away! I started reading your blog as research for a young adult novel I'm writing (to be pubbed by Penguin), but the more I learn, the more it gives me hope for amazing medical breakthroughs. And it's also become personal since I have nephew with Dravet's Syndrome. I loved "The Forever Fix" and recommend it to everyone with an interest in this subject.

Thank you so much Jeanne! Can't wait to see your book!

After I read your amazingly understandable facts and views, i always find myself smiling!