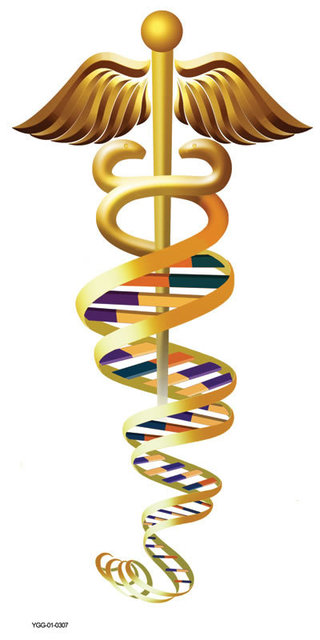 Should kids have genetic tests? It depends. (NHGRI)
Exomes are big news. Sequencing of the protein-encoding part of the genome is increasingly solving medical mysteries in children. It began with Nicholas Volker and his recovery from a devastating gastrointestinal disease with a stem cell transplant once his exome sequence revealed his problem. And recent Medscape assignments reveal the trend: 7 of 12 kids’ exomes leading to diagnosis at
Duke University
from May 10, 2012; whole genomes of 5 infants from the neonatal intensive care unit at Children’s Mercy Hospital and Clinics in Kansas City, Missouri from October 3, in under 2 days each, focusing on 600 single-gene diseases; and 300 patients at the Whole Genome Laboratory at the Baylor College of Medicine, with 300 more waiting -- 85% of them kids, from November 9, 2012. (You have to sign in to Medscape; it’s free.)

Before we all run out to get our exomes and/or genomes sequenced, it might be a good idea to slow down and look at how to handle existing, single-gene tests – especially in children. A policy statement issued from the American College of Medical Genetics (ACMG) and the American Academy of Pediatrics (AAP) does just that, providing guidelines for health care providers while also eloquently summarizing many genetic testing scenarios – some I hadn’t thought of.

You’ll have to read the ACMG and AAP papers for the compelling arguments, but here’s a Cliff’s Notes version of the recommendations.

SCENARIO: A child has symptoms of a known genetic disease.
ACMG/AAP: YES. It’s part of a normal diagnostic work-up.

SCENARIO: Routine heterozygote carrier screening.
IT DEPENDS. “The AAP and the ACMG do not support routine carrier testing or screening for recessive conditions when carrier status has no medical relevance during minority.” But it’s ok if there are medical recommendations, such as for sickle cell carriers to avoid high altitude and vigorous exercise.

SCENARIO: Carrier testing on pregnant teens.
IT DEPENDS: Health care providers should know the laws in their states about whether teens can make reproductive decisions without parental knowledge.

SCENARIO: Genetic screening (on a population for heightened risk) or testing (on certain individuals for diagnosis) done at school.
NO

SCENARIO: Predictive testing (Huntington disease) or predispositional testing (familial cancers) for adolescent- or adult-onset conditions
IT DEPENDS. “The AAP and the ACMG continue to support the traditional professional recommendation to defer genetic testing for late-onset conditions until adulthood,” says the statement. But lead author Lainie Friedman Ross, MD, PhD, who has a long list of titles at the University of Chicago, says the view has softened somewhat since the Huntington disease gene was sequenced in 1993 and researchers worried about how relatives might react. It’s turned out that people who would harm themselves tend not to seek testing. “But sometimes it may be in the best interest of the child to do predictive testing. Some families are so stressed out after living with ambiguity and not knowing, that it might be better to test,” she says.

SCENARIO: Teens wish to have a predictive test without their parents knowing.
NO. Results might tell the parents something they don’t want to know.

SCENARIO: Testing kids for histocompatibility genes so they can donate organs.
IT DEPENDS. It’s ok to benefit a family member. (See Jodi Picoult’s My Sister’s Keeper for a different view, albeit fictional.)

SCENARIO: Potential adoptive parents want the genetic scoop on a kid.
IT DEPENDS. The report waffles on whether prospective adoptive parents should have genetic info (pro: health; con: stigmatization) but okays adoptees getting such information about themselves as they reach adulthood. This scenario also arises for offspring of assisted reproductive technologies.

SCENARIO: Parents do not want child to know genetic test results.
IT DEPENDS. For little kids, the health care provider should weigh not telling the child, especially if there’s no treatment, versus telling a child who’ll suspect something is wrong anyway. For teens, the AAP and the ACMG “believe that a request for the results of a genetic test by a mature adolescent should be given priority over his or her parents’ requests to conceal information.“

SCENARIO: Genetic testing reveals non-paternity.
IT DEPENDS. Human error, new mutations, and uniparental disomy (inheriting two copies of a gene from one parent, rather than one copy from each parent) can all lead to a conclusion that, as one prominent geneticist puts it, “the daddy is not really the daddy.” The ACMG and AAP view: “Mismatches at a single locus or chromosomal region are insufficient to establish nonparentage.” Test more genes.

SCENARIO: Direct-to-consumer genetic testing.
NO! “The AAP and the ACMG strongly discourage the use of DTC and home-kit genetic testing of children” and furthermore call for consultation with a genetic counselor or medical geneticist both before and after testing – something not easy to find using “recreational” genetic testing services in their current form. That may change if their tests are granted FDA approval.

“Pre-test counseling makes sure that the family is thinking of the best interests of the child. Post-test counseling deals with the fact that information from DTC companies is a moving target. Information that a company puts out today may change in 6 months and then there would be a need for health care providers to intervene, so why not do it from the beginning?” Dr. Friedman Ross told me.

She sums up all of the above scenarios in a single sentence: “Genetic testing, like all testing in children, should focus on the best interest of the child.”

This blog was published at Scientific American on February 21.