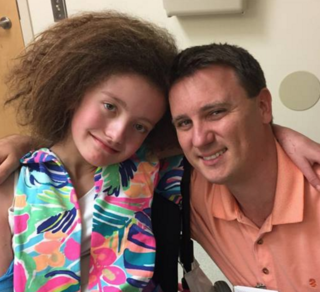 Although Hannah is the fifth child in the clinical trial, she’s the first whose body doesn’t make the protein at all, thanks to two deletion mutations. She required a separate protocol to suppress her immune system so that it would accept the treatment, which uses the harmless adeno-associated virus to deliver the genes. At one point, it seemed that the clinical trial wouldn't include her, despite the funding from Hannah's Hope Fund.

I’ve chronicled the efforts of Hannah’s family to treat the ultrarare GAN here and at my PLOS blog DNA Science. The disease is like ALS in children. For the unusual story-behind-the-story of development of the GAN gene therapy, see my recent interview with Steven Gray at Rare Disease Report. My most recent update began “Eleven-year-old Hannah Sames can still curl her toes, just barely. But time is running out.”

Time almost did run out.

GENE THERAPY UPS AND DOWNS
The first clinical trial for a gene transfer protocol in the U.S. was in 1990. A gene therapy has not yet been FDA approved here; two have in Europe.

The setbacks for gene therapy seem to come in waves. Soon after the death of 18-year-old Jesse Gelsinger in 1999 when his immune system rejected the viruses carrying genes to treat his metabolic disorder, several boys who had gene therapy for an inherited immune deficiency – which worked — developed leukemia when their healing genes inserted into oncogenes.

It seems that trouble is back. In recent weeks, Juno Therapeutics announced deaths in a gene therapy trial for leukemia, and ZIOPHARM Oncology reported deaths in a trial for glioblastoma.

Then there’s the issue of selecting patients — even among the unicorns of rare diseases, the number of needy children exceeds the number of slots. A just-published piece in MIT Technology Review",“Gene therapy trial wrenches families as one child’s death saves another,” describes how an older child’s inherited disease lead to pre-symptomatic diagnosis of, and gene therapy for, a younger sibling. That family is from the US, and the gene therapy trial underway at the San Raffaele Telethon Institute for Gene Therapy in Milan.

The protocol for that trial, for metachromatic leukodystrophy, enrolls children who have not yet developed symptoms because the gene therapy can prevent them. The symptoms of MLD are harrowing and rapid: loss of speech and mobility by age 2, then blindness, wasting, loss of swallowing ability, and dementia, with death by age 5. The paper in The Lancet reporting the trial results recognizes older siblings who died, while their younger siblings are now doing well thanks to the gene therapy.

Yet clinical trial designs differ, because diseases differ. GAN is not like MLD, with later recognition of symptoms, a slower course, longer survival, and terrible although less profound neurological losses. In the GAN trial, older siblings are being treated with the hope that their affected younger brothers and sisters will follow.

INFUSIONS AND INJECTIONS
Despite all the drama surrounding gene therapy and the technical challenge of creating the vector, the actual delivery, if via the bloodstream, can be anti-climactic. The culmination of a multi-year effort may be a brief infusion or injection.

When 4-year-old Ashanthi DeSilva received a “soup” of 10 billion of her own T cells bolstered with healthy adenosine deaminase genes in her IV at the NIH shortly after noon on Monday, September 14, 1990, it took only 28 minutes.

When 6-year-old Eliza O’Neill had gene therapy this past May for a one-time treatment of her Sanfilippo syndrome type A, the infusion into a hand vein took just 30 minutes.

Hannah’s gene therapy is also strangely straightforward, an injection into the spine.

I met Lori and Hannah while researching and writing my book about gene therapy, The Forever Fix: Gene Therapy and the Boy Who Saved It. The book is mostly about Corey Haas, an 8-year-old who became able to see thanks to gene therapy, and I wrote it after that fact, in 2011. Two chapters tell the story of Lori and Hannah at the height of their fundraising frenzy.

Last summer, at the annual 5k run for Hannah’s Hope, Lori announced that it might be the last year, because Hannah’s time would come in 2016. It still seemed unbelievable.

WHEN LORI FIRST KNEW GENE THERAPY COULD SAVE HANNAH

I am thrilled beyond measure that Hannah has finally gotten her treatment. I keep thinking back to when I was with Lori when she realized that gene therapy could save her child.

We were roommates at the American Society of Gene and Cell Therapy annual meeting in 2010, when Corey, who had been on the brink of complete blindness, walked onstage with his parents. Here is an excerpt from my book:

“The high point of the gene therapy meeting, for Lori and the other 1,000+ attendees, came on Friday night, at the Presidential symposium. A nine-year old boy walked onstage holding the hands of his nervous-looking parents. A woman with flowing long reddish hair held in place with pink barrettes and wearing a short jumper with red tights followed – Dr. Jean Bennett. As the crowd sat stunned, the family settled into their seats, and with a broad grin, Dr. Jean said, “I’d like to introduce the youngest person ever to speak at ASGCT – this is Corey Haas.”

With that simple sentence, she brought many in the crowd of usually staid scientists, especially the older ones, to tears. Seeing Corey, hearing Corey, laid to rest the doubts over Ashi and Cynthia, the anguish over Jesse and Jolee and the leukemia boys. Gene therapy was and is, finally, a resounding success.

Dr. Jean then told the story of Corey’s gene therapy, including the now famous film of the boy navigating the mobility course with his treated eye (in seconds) and then his untreated eye (in several looooong minutes). Then Corey calmly answered questions from the audience. Ethan beamed; Nancy dabbed at her eyes.

“Corey, would you like to have your second eye done?” Dr. Jean asked.

The crowd roared. Corey, a veteran of news and talk shows, was already a pro at handling an audience.

After the Q+A, when the family returned to their seats in the front row, Corey was mobbed. A woman scientist bent down and threw her arms around him, crushing him to her pillowy bosom. “You’re going to be a scientist when you grow up, aren’t you?” she asked, as Corey tried politely to squirm away. He turned around and broke free for a moment, when he was stopped by a distinguished older man thrusting out his hand. “You are the bravest person I know,” he said, shaking hands, and Corey grinned.

believe in possibleOn the fringe of the crowd stood the usually laughing Lori, uncharacteristically still and silent, tears streaming down her face. For if gene therapy can cure Corey, it can cure Hannah, too.

The next afternoon, when Lori stepped onto the sidewalk outside baggage claim at Albany International Airport and scooped up Hannah as she stumbled toward her from the family van, the little girl was unimpressed.

“Mommy, why do you have to go away to learn science?”

Hannah Sames now knows why her mom had to go away to learn science: To turn it into medicine.

Please send cards to Hannah at: