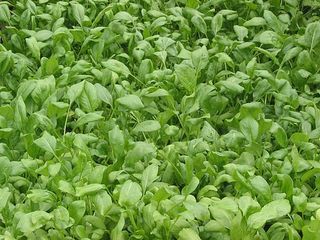 Sidelined in the produce section of a supermarket, bagged and bunched into a sad uniformity mere feet from the regal, multihued heirloom tomatoes; the purple, orange, and cream-colored cauliflowers; the myriad types of onions, potatoes, squashes and even peas, spinach plants sport a dark green sameness distinguishable only by leaf size.

A WHITER SHADE OF KALE

At farmer’s markets, the lone spinach nestles amongst an ever-growing cornucopia of hipster greens, the kale and arugula, chard and mustard. The diversity of kale alone, thanks to recent efforts at artificial selection (aka agriculture), is staggering. Besides common curly kale, markets display Lacinato kale (aka Dinosaur, Tuscan, or Cavolo Nero), Chinese, Siberian, Red Russian (aka Ragged Jack), Italian, Redbor with its brilliant purple-red leaves, and boring white. Albinos abound in nature.

Kale also has the distinction of having been cultivated by Thomas Jefferson, rather than requiring the invention of an annoyingly hypertrophied male cartoon character to entice kids to eat it.

Some human efforts to mold crop traits go in the opposite direction of the many flavors of kale. Multi-hued carrots have recently returned, after decades of selecting the orange ones. Heirloom tomatoes by definition aren’t hybrids, allowing hidden recessive traits, such as a range of colors, to emerge.

If food labels included genome information, as well as the familiar "organic" and "non-GMO" and the "NuVal" scores cropping up at my local supermarket, shoppers might glimpse some fascinating biology http://ocri-genomics.org/bolbase/ evolutionary biology. For example, broccoli, cauliflower, Brussels’ sprouts, cabbages, kohlrabi, collards, and yes, the many kales, are all basically the same freaking plant! Farmers have tweaked and coaxed them from shared ancestor Brassica oleracea, the wild cabbage, whose genome sequence was unveiled in 2013.

Breeding new plant varieties is far easier than doing so for animals, because plant chromosome sets have a tendency to naturally duplicate themselves into diversity. All it takes from us is some clever selection.

Because I sympathize with spinach, I was intrigued last week by a news release heralding a high resolution genome sequence. And I wasn’t disappointed, for the DNA reveals that spinach’s sameness is merely a reflection of its perfection, the "if-it-ain’t-broke-don’t-fix-it" stasis of evolution when a species is highly adapted to its environment, and survives outside changes.

Spinach now officially joins the ranks of the other renowned "living fossils". Charles Darwin coined the phrase in 1859 in Origin of the Species to denote an existing species that looks just like its distant ancestors. The poster species for the living fossils is the coelacanth, a big ugly fish periodically deemed extinct until it washes ashore somewhere or shows up at a market. Fig wasps, crocodiles, horseshoe crabs, nautilus, and the Palau cave eel are other animal living fossils, and from the plant kingdom reigns Ginkgo biloba, which remains unchanged from fossil forms dating to 270 million years ago.

As many species underwent drastic changes through evolutionary time, the living fossils nevertheless persisted as is. Nature selected horses from the 52-million-year-old fox-sized Eohippus, but people assisted the rather rapid evolution of the wild grass teosinte to corn (see
The Evolution of the Horse Coloring Book).

We know about horse evolution from fossilized bones and teeth, and we can reconstruct plant origins from patterns of chromosome duplication and shuffling. Dissecting the evolutionary history of spinach required a deeper dive, into the nuances of its genome.

In 2013, genome scientists from the Boyce Thompson Institute at Cornell University and Shanghai Normal University began assembling spinach cultivars from around the world to probe not only the genome, but transcriptomes as well, to follow gene action. The genome sequence was published May 24 in Nature Communications, providing 168-212-fold coverage (reflecting completeness) and considering 107 cultivated and 13 wild varieties.

A BRIEF HISTORY OF SPINACH

Spinach was genetically spun off of a wild relative, Spinacia turkestanica, and the ancestor to those two species was Spinacia tetrandra, a relative 10 times more genetically diverse. An even more distant ancestor was the mustard weed Arabidopsis thaliana, the laboratory darling of plant geneticists. The great spinach-beet divergence transpired about 38.4 million years ago, and spinach somehow acquired all those jumping genes about 1.5 million years ago.

Spinach was domesticated a mere 2,000 or so years ago in Persia (Iran), and was brought to China around 600 AD and then to North Africa and Spain about 1100 AD. Spinach spread through Europe and ultimately came to North America with the early colonists. People all over selected their favorite leaf sizes and shapes, yield, and blooming characteristics, gradually fashioning a green that really didn’t change very much.

Researchers probe genomes for signs of “selective sweeps” – mutations that alter the amino acid sequence of a protein that a gene encodes. A mutation that does so – for example, a DNA triplet of TGA to CGA would change the corresponding amino acid threonine to alanine – can impact evolution, ultimately, if it alters the protein in a way that gives the organism a reproductive advantage. In contrast, a change of TGA to TGT, TGG, or TGC would still encode threonine, and therefore not affect a trait, and so not be subject to natural or artificial selection. (All species use this same genetic code, despite much media misreporting of “human genetic codes.”)

Anyway, even though spinach hasn’t promiscuously swapped its chromosomes with those of other plants, its genome does harbor 93 regions, embracing 261 genes, that indicate “domestication sweeps” of positive selection, reflecting the touch of humanity. Some selected genes affect leaf number and stem lengths. More important are the 193 genes that encode proteins that provide disease resistance, which interestingly affect Toll-like and interleukin receptors, which we also have. Some of the newly-identified spinach genes may suggest ways to protect against the plant’s major pathogen, downy mildew. Aka “late blight,” the infection has devastated California spinach crops and has recently shown up in New York state.

Other genes that have been selected in spinach have to do with an enzyme, fucosidase, involved in sugar metabolism, perhaps heralding the divergence from the old sugar beet relatives. The gene has the catchy name AtFUC1, in honor of relative Arabidopsis thaliana (At).

With politics so much on everyone’s mind these days, I can’t help but think that the story of spinach sends a message that sometimes, things are okay just the way they are. “Change We Can Believe In” and “Make Spinach Great Again” don’t apply to Spinacia oleracea.


This post appeared on June 1 at my DNA Science blog for Public Library of Science.