Cystic Fibrosis Among Asians: Why Ethnicity-Based Genetic Testing is Obsolete 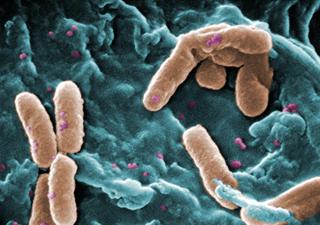 Pseudomonas aeruginosa, a bacterium that inhabits the lungs of many people who have cystic fibrosis, but is otherwise rare.
A hypothetical heterosexual couple living in the US or UK takes tests to learn if they are carriers of the more prevalent recessive diseases. They’re relieved to find out that cystic fibrosis (CF) isn’t something they need worry about passing to their children – neither has any of the few dozen mutations the test panel includes.

The couple do not carry the most common 32, 106, or even 139 disease-causing mutations in the CFTR gene, the number depending upon the testing lab. But that could be a problem – a false negative – if the woman and man are anything other than non-Hispanic whites.

More than 2,000 variants (alleles) of CFTR are known, and their prevalence varies in different populations. That’s not because DNA recognizes the race or nationality of the person whose cells it’s in, but because of how we choose our partners.

For people of Asian ancestry, the available CF test panels are pretty much useless, according to an article (“Ethnicity impacts the cystic fibrosis diagnosis: A note of caution”) and an accompanying editorial (“Don’t judge a book by its cover: the emerging challenge of diagnosing CF in non-Caucasians”), in the latest issue of the Journal of Cystic Fibrosis (both unfortunately behind a paywall).

Barbara Bosch, from the University Hospitals Leuven in Belgium and colleagues, compared CF symptoms among 234 Asians represented in the international CFTR2 database to 53 patients in the UK CF database.

In European whites, CF tends to cause lung congestion (often with Pseudomonas aeruginosa infection), pancreatic insufficiency, salty sweat, and likely one or two copies of the mutation F508del, which deletes one of the protein’s 148 amino acids. Asians had been thought to have more severe lung disease than the classic European cases, but it turns out that they have poorer lung function overall, making CF seem worse. Asians also have less salty sweat, much better pancreatic function, and fewer cases of CF-associated male infertility. It isn’t surprising that CF cases among Asians can be missed or misdiagnosed.

The most important distinction between European white and Asian populations, for treatment purposes, is the CFTR mutations. While 73% of people recognized to have CF worldwide have at least one copy of F508del and 70% of Europeans with CF have two copies, the mutation accounts for only 12-31% of CF alleles among Asians, and none (so far noted) in Korea, Japan, Thailand, and Vietnam. Last year researchers discovered a CFTR mutation in the Chinese not yet found in other populations. Having F508del or a handful of other specific mutations is a prerequisite for the targeted treatment ivacaftor (Kalydeco) and only F508del for ivacaftor combined with lumacaftor (Orkambi).

“Asian roots impact on all 3 CF diagnostic pillars,” the researchers conclude, referring to the lung and pancreas symptoms, the salty sweat, and the mutations. To avoid misdiagnosis as something like tuberculosis, which has happened to Chinese children with CF, the investigators suggest a more personalized approach to diagnosing the condition that considers ancestry. But parsing populations to better target genetic tests is running up against genetic admixture – diversity at the DNA level when parents are from different backgrounds.

In this age of ancestry.com ads everywhere and even dog breed DNA tests available at Wal-Mart, shouldn’t we gear genetic disease tests to ancestry, restricting the mutations? But there’s a catch-22. Returning to the example of CF, if Asians (and presumably other non-whites) are misdiagnosed when their clinical presentations don’t match the classic “white” phenotype, then their mutations won’t enter the databases that guide test development.

A better approach than meticulously cataloging ancestors and testing for the few identified mutations in prospective parents, especially given faster and cheaper DNA sequencing, is what the company GenePeeks is pioneering: mining as much information about a gene as possible, and applying it to all patient samples. That means deducing every way that a gene can vary, with extra, missing, and substituted DNA bases. So far they’ve interrogated more than 1,000 genes.

For CF, GenePeeks’ curation process predicts changes in the 188,702 DNA base sequence of CFTR that alter the encoded protein’s structure or function in ways that could affect health. F508del entraps CFTR protein in the twists and turns of the cell’s secretory network, so it can’t reach the surface where it should monitor ion (salt) transport. A different mutation might slow the protein’s journey to the cell membrane, and another close the ion channels too quickly. For some genotypes, symptoms might be so mild that a clinician not familiar with the diverse guises of CF wouldn’t make the diagnosis. Chronic sinusitis or male infertility may be the lone manifestations.

GenePeek’s analysis extends to interactions of mutations. For example, their algorithms can pick up when two people have mutations in different parts of the gene that complement, so that together in their child, the protein functions well enough to support lung health. A lab just cataloging mutations without considering how a pair of them might theoretically interact (based on biochemistry) might conclude that the risk of the child inheriting CF is 25%, when it’s not. In the future, analysis will ideally include gene-gene interactions.

Several recently announced collaborations are bringing GenePeeks’ expertise to parts of the world where populations are young and more global genetic testing needed: Saudi Arabia, the United Arab Emirates, Oman, Qatar, Bahrain, Kuwait, Lebanon, Jordan, Turkey, India, Pakistan, South Africa, Egypt, Ghana, and Kenya. “The desire to protect a future child from serious disease is universal. We’re trying to meet that need with better screening tools in markets that have been underserved historically,” GenePeeks CEO Anne Morriss recently told me. Whenever the company becomes aware of a clinically important variant of any gene, they add it to their list for anyone – not just a member of the population in which the mutation was discovered.

Genetic Testing for All

While genetic testing companies are expanding their offerings, some of them are still not keeping up with admixture. Even recent recommendations to increase the roster of genes in preconception carrier screens require that a disease have a carrier frequency of at least 1 in 100. But where? Among whom? That criterion might miss a disease that’s rare in a larger population yet concentrated in a subgroup.

That’s the case for Steel syndrome, which causes joint pain, hip dislocation, pinching of the spinal cord in the neck, short stature, and characteristic facial features, due to a mutation in a collagen gene. It’s much more common among residents of East Harlem in New York City who are of Puerto Rican ancestry than among other groups. Hip surgery, which is done for the same symptoms arising from an injury, could harm a person with Steel syndrome. Because some people who identify as Hispanic may not be aware of Puerto Rican ancestry, adding the Steel syndrome mutation to orthopedic genetic testing panels or collagen panels makes sense. The 1 in 100 carrier frequency rule would miss the disease in East Harlem. (I told the Steel syndrome story here.)

GenePeeks’ approach celebrates the dynamic complexity of the human gene pool. “The protocol recognizes the realities of global migration and diversity. People move – they always have and always will. A couple with Middle Eastern ancestry can just as easily walk into a doctor’s office in LA as Dubai,” says Morriss.

Direct-to-consumer genetic testing websites can oversimplify the situation, presenting carrier testing as a yes/no situation: you have a mutation or you don’t. “If you are starting a family, find out if you are a carrier for certain inherited conditions,” advertises 23andme. “A carrier” can actually mean hundreds if not thousands of different things! We have two copies of each gene (except the X in males), and each gene, because it has thousands of building blocks, comes in many flavors.

So before we all load our genome sequences onto our smartphones and start doling out dough for analysis to the companies that are now planning this new addictive service, researchers need to learn all there is to know about specific genes – in us all.

Who ever knew genetics could be so complicated?