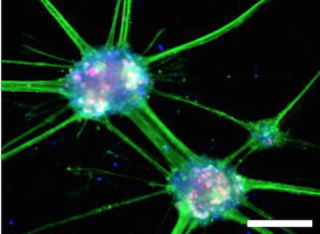 Like Alzheimer's, the less familiar HD also affects the brain, but HD is always inherited and is much rarer. The only treatments for HD manage symptoms, some of them prescribed off-label, borrowed from other conditions. A treatment that addresses the underlying cause of the disease, which delays onset or slows progression, has been elusive for decades.

HD is one of 40 "expanding repeat" diseases. A tiny part of a gene repeats many times, resulting in an encoded protein burdened with extra amino acids that interfere with its folding, rendering the protein sticky. In HD, mutant huntingtin protein gums up neurons in the brain's striatum, blocking signals essential to control movements and to think. Behavior changes too – anger and aggression may soar, as irritability, loss of impulse control, and confusion reign. The white matter part of the brain – the axons of those neurons – shrinks.