How the Media Oversimplifies DNA Testing of Separated Families 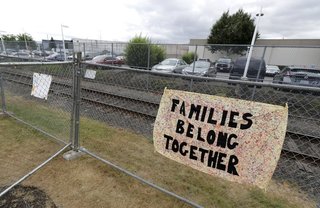 Should DNA testing be used to help reunite separated immigrant families?
When the Genetic Information Nondiscrimination Act of 2008 (GINA) was passed to unify “the existing patchwork of State and Federal laws,” the language was broad enough to apply to just about any use of information gleaned from DNA. The law is meant to prevent discrimination in health insurance and employment based on results of a “genetic test,” defined as “an analysis of human DNA, RNA, chromosomes, proteins, or metabolites, that detects genotypes, mutations, or chromosomal changes.”

Use of “genotypes” alone covers any application of determining sequences of A, T, C, and G that I can think of, and if that’s not enough, the first sentence of the act mentions sequencing the human genome.

A decade ago also came the first direct-to-consumer (DTC) DNA tests, from a handful of companies. Since then the number and types of “spit” and cheek swab tests and companies offering them have mushroomed, probing traits, tendencies, risks of future illness, metabolic quirks, behavioral characteristics, carrier status for single-gene diseases, and of course ancestry. But with the spreading tentacles of DNA testing, a lack of precision in describing what, exactly, is being considered, can lead to misunderstanding. That’s apparent in the use of DNA testing to help to reunite children separated from their parents as part of the Trump administration’s “zero tolerance” policy at U.S. borders.

Don’t Echo Politicians Who Gloss Over the Science

Continue reading at DNA Science, where this post first appeared. Read More
Be the first to comment