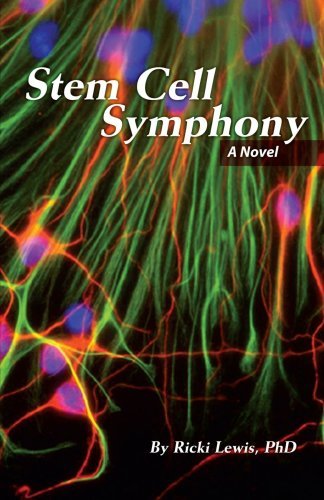 The Story Behind Stem Cell Symphony

His real name wasn’t Stuart, but he knew I would be writing about him.

I met "Stuart" in April 2005. I was a new hospice volunteer, Stuart a longtime resident of a nursing home where he was several decades younger than everyone else. He was the fifth of eight siblings to have Huntington disease (HD). He’d been sick for so long that his uncontrollable, constant movements had finally become too much for him. He was still, unable even to speak.

We’d been matched because I’m a geneticist with a special interest in HD, and also because we both loved rock music and were uneasy with religious matters. That first day, I plugged us into my iPod, played a Beatles tune, and watched his face transform. It was to become one of many real scenes in Stem Cell Symphony.

As I stood by his side day after day, playing songs chosen to tell stories, I began to fantasize -- about really helping him. I’d visited the labs of stem cell researchers and seen the curious balls of human neural stem cells rotating under their microscopes, the possibilities tantalizing. I started to think, what if? What if the music activated Stuart’s neural stem cells? What if it was something about the music, such as the arpeggios of U2? And how would the science work? I knew enough about the science to imagine precisely how we might signal the stem cells already nestled into our brains to heal.

In June 2005 I read about a competition for a dozen scientists to attend a weeklong screenwriting workshop at the American Film Institute in Hollywood. The "Catalyst Workshop" was a Pentagon-sponsored program to inject scientific accuracy into feature films. Candidates were to apply with an idea, so I described my musical stem cell fantasy.

Meanwhile, Stuart was getting sicker by the day. He had fevers, and increasing trouble breathing. He could not eat without choking. Every once in awhile, his arm would jerk up, out of his control, and he’d actually hurt himself, drawing blood. But still he always nodded "yes" whenever I took out my iPod.

One hot July afternoon, hospice called to tell me that Stuart had worsened. I’d already seen him that morning, and we’d listened to music, as usual. So I headed back to the nursing home. A chaplain arrived, and I didn’t object when he performed last rites – I knew Stuart wouldn’t have wanted that, but thought it couldn’t hurt. After the chaplain left, Stuart just stared at me – he could no longer blink.

"Stuart, do you want to hear the music?" I asked, as I always did.

But this time, he ever-so-slightly nodded up and down. "No."

So I put the iPod away, hugged him, and quietly left.

I couldn’t sleep. When I called the nurse’s station on Stuart’s floor at 5 AM, an aide gently told me that Stuart had just died.

A few hours later, in tears, I handed my iPod to my daughter and asked her to find out what his last song had been. For by signaling "no" that last time, he had effectively chosen his last song.

She turned on the iPod, looked at the screen, gasped, and held it out to me.

Lyrics straight out of the bible. It had never come up on the iPod shuffle before, and hasn’t since.

Five days later, I went to Hollywood. With the advice of some very strange people in the movie business -- our instructors at "film school" – I embellished Stuart’s story into a screenplay. And that screenplay became the novel, Stem Cell Symphony.

Someday, activating our own stem cells will not be fiction. We’re almost there.