Genomics to the Rescue for Sumatran Rhinos 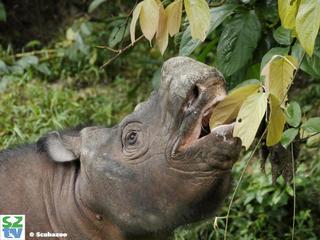 Sumatran rhinoceroses are solitary creatures that browse the dense rainforests of Borneo and Sumatra, living in small, scattered, shrinking groups. Taking a census is challenging, although they "sing." It isn't known how many of them exist, exactly, but the number is small.

A multinational research team has unearthed clues in the genomes of 21 of the animals, five "historical" from the Malay Peninsula where they are extinct, and 16 modern genomes from the remaining populations on Sumatra and Borneo. "Genomic insights into the conservation status of the world's last remaining Sumatran rhinoceros populations" appears in Nature Communications.