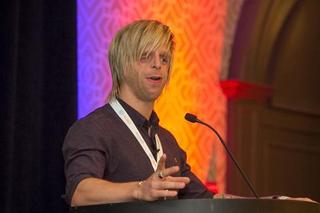 People with Treacher Collins syndrome do not have certain facial bones, and about half have hearing loss. Only 1 in 50,000 people in the US has it, and about 1 in 10,000 in the UK, Jono's home. Most cases are autosomal dominant and due to mutations in the TCOF1 gene.

But this post isn’t about DNA. It's about an incredible young man who is smart, funny, and caring, and quite beautiful. Here in Jono’s own words, from the NORD conference:

“I was born with a genetic condition that affects my facial features. I have no cheekbones, and so my eyes dip down. I love my little ears, they don’t get cold at night. But I do need hearing aids.

I’m one of the lucky ones. More severely affected individuals need help with feeding and breathing. I met some kids who’ve had more than 70 surgeries to correct problems that would make their lives easier.

My birth parents had no idea. When I was born, they were in total shock. I was out of the hospital 36 hours after I was born. Social services found someone to look after me. The foster carer was a lady called Jean. She was very short, and all her kids were grown, and she had so much love to give. Social Services told Jean there was a child in hospital whose parents were horrified, and there was no maternal bond. Jean said, “How could you not love a child?” She took one look at me and said, “Hell yeah, let’s make this happen!” Read More
Be the first to comment