Genetics Error in "The Man in the High Castle" Season 2?

Tags: The Man in the High Castle 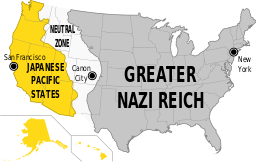 What if the Germans and Japanese had won WW2?
I’ve just finished watching season 2 of Amazon video’s terrifying The Man in the High Castle, which depicts an alternate reality in which Germany and Japan won the second world war, with an atomic bomb taking out Washington, DC. I admit confusion over gaping plot holes and teasers, but I did catch enough of the dialog to suspect that genetic info about one of the families is wrong.

Thomas Smith, adolescent son of Obergruppenführer John Smith, has a form of muscular dystrophy. According to a footnote in Wikipedia, it is Landouzy-Dejerine syndrome, which I hadn’t heard of by that name but recognized its name today, facioscapulohumeral muscular dystrophy (FSHD). It is autosomal dominant – if you have it, so does or did one of your parents, unless you're a new mutation (about 30 percent of cases).

In a 10-second scene in the final episode, we learn that John Smith’s uncle had the disease, and that his two daughters must be carriers.

A dominant condition doesn’t have carriers. You have the mutation or you don't, although symptoms may occur later in life, in which case a person with the mutation is pre-manifest, not a carrier in the classic sense. Since Tom’s uncle had it too, presumably before the State murdered him, and the condition is rare, it must be inherited, not due to a new mutation. I can only reconcile these facts if John Smith has the mutation too but is non-penetrant – meaning he has the genotype but not the phenotype. I wonder what the Nazis, obsessed with purifying the gene pool, would do with that intel! Plus, Thomas has what appears to be seizures and he trips – not the upper body weakness of the disease.

I suppose the writers chose FSHD because it isn’t horrible, making it more horrible that the Nazis exterminate those who have it. When Thomas realizes that he’s not healthy, he mutters the mantras “I’m a useless eater” and “I'm defective.”

I won’t spoil the ending. But can anyone explain an inheritance pattern that has carriers and non-penetrance? Meanwhile, maybe the new showrunner for season 3 will take a genetics course. Read More
4 Comments

It would have to be X Linked recessive like Muscular dystrophy, however the mother is the carrier not the father. As the father always gives the Y chromosome

Yes, that would make sense, but I thought the uncle or uncles who were affected were brothers of the father. If they were his mother's brothers then it makes sense. Thanks!

I have been suffering from amyotrophic laterals sclerosis (ALS) disease for the last three years and had constant pain, especially in my knees. my first sign that something was wrong, was my slurred speech. And then the inability to eat without getting choked, strangled, and coughing.Throughout my three years ordeal, i was able to walk with assistance nothing was really working to help my condition.I went off the riluzole (with the doctor’s knowledge) and started on amyotrophic lateral sclerosis herbal formula i ordered from Health Herbal Clinic, Just 7 weeks into the Herbal formula treatment I had great improvements with my slurred speech, there is no case of constant pain and chest tightness since treatment, visit Health Herbal Clinic official website www. healthherbalclinic. net or email info@ healthherbalclinic. net. This treatment is incredible!

It is not appropriate for me to post ads here. I know a great deal about ALS, from working closely with a hospice patient. Unfortunately, no "herbal formula" is going to help. Caveat emptor.