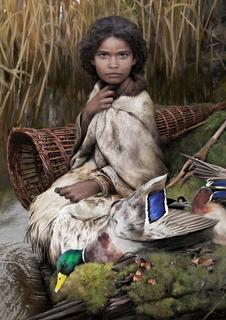 About 5,700 years ago in southern Denmark, a woman enjoyed a meal of hazelnuts and duck, then chewed gum made from the boiled, tar-like gunk of birch bark. Pieces of DNA extracted from the ancient gum and overlapped to reconstruct her genome reveal that she had dark brown hair, dark skin, and blue eyes.

Her discoverers named her Lola, perhaps in honor of the eponymous Kinks song: "I asked her her name and in a dark brown voice she said, 'Lola.'"

Researchers from the University of Denmark and elsewhere published the findings in Nature Communications.

Lola lived on the island of Lolland, east of Rødbyhavn in southern Denmark, where today an 11-mile-long tunnel is being dug to link to the German island of Fehrmarn. Archaeologists from the Museum Lolland-Falster are at the site, the largest from the Stone Age in Denmark. It's called Syltholm, and Lola, technically, the "syltholm individual."