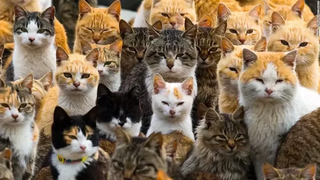 Each year in the U.S. 1.4 million cats and 1.2 million dogs are euthanized to control their numbers, yet the stray population is many times larger – despite the fact that spaying or neutering is a rite of passage when adopting a kitten or puppy. Surgical contraception works, but is painful, invasive, and includes the risk of anesthesia.

Might gene therapy provide a one-time, far less invasive way to ensure that cats and dogs do not beget kittens and puppies? That’s one of the goals of the Alliance for Contraception in Cats & Dogs. I’ll be speaking at their annual meeting in July, although I’ll admit that using gene therapy for pet contraception is a new idea for me.

Adapting gene therapy techniques to render pets infertile is a bit of a turnaround, for cats and dogs bearing natural mutations have served as models.

The first FDA-approved gene therapy, Luxturna, which treats retinal blindness due to mutation in the RPE63 gene, was developed thanks to Briard sheepdogs, a natural model. (I tell their story in chapter 16, “Kristina’s Dogs,” in my gene therapy book.) When Lancelot, one of the first dogs to receive the gene therapy, suddenly saw the world after the procedure on one eye a few days earlier, he spun in circles, trying to glimpse everything at once. Joyful canine spinning quickly replaced the carefully-planned laboratory assessments.

Cats are curing blindness too. Abyssinian, Somali and certain Ocicat breeds are models for retinal blindness due to mutation in the CEP290 gene.

Golden retrievers have been critical in tackling Duchenne muscular dystrophy. My favorite dog superstar of gene therapy is chocolate Labrador retriever Nibs, whose descendants have led to the successful treatment of a horrific neuromuscular disease that begins before birth, gene drives flood a population with DNA molecules that destroy fertility within a few generations, driving extinction. Gene drives target mosquitoes that carry Zika virus and the protozoan that causes malaria, which are of course useful in the short term to us humans, but orchestrating species invasions or extinctions can have unpredictable consequences in ecosystems.

Pets aren’t the only animals whose populations might be controlled with vectored contraception. Researchers envision applications for farm animals, zoo residents, and wild animal populations.

Gene therapy for vectored contraception would intervene in the hormonal signaling cascade from the brain’s hypothalamus, to the nearby pituitary gland, to the sperm and eggs developing in the gonads, and even at fertilization. And altering DNA is a more lasting intervention than altering proteins or RNA.

Imagine a drug that is based on a monoclonal antibody (MAb), a single type of antibody molecule that can disable a cell by binding receptors on its surface.

(Historical recap: The human immune system manufactures polyclonal antibodies – a set of proteins that target different parts of a pathogen. MAb technology, developed in the 1970s with the first drugs FDA-approved in the 1980s, fuses a cancer cell with a lymphocyte to mass-produce a single, or monoclonal, antibody type.)

The generic names of the dozens of MAb-based drugs end in “mab” and include many of those bizarre pharmaceutical company ads on TV in which smiling, happy people promise extended or improved life as a voiceover lists horrific adverse effects.

Drugs that are MAbs are typically delivered by frequent intravenous infusion because digestive enzymes would dismantle a drug that’s a protein or peptide. Instead, vectored contraception introduces the genetic instructions for the MAbs to targeted cells, which would then continually produce the antibodies.

Various scenarios could provide pet contraception, based on intervening in the hypothalamic-pituitary-gonadal axis. DNA instructions might enable continual production of monoclonal antibodies that:

• bind gonadotropin releasing hormone (GnRH), blocking it from stimulating the anterior pituitary to release luteinizing hormone (LH) and follicle stimulating hormone (FSH). Intramuscular injection leads to atrophied gonads, and eggs and sperm can’t form.
• target the enzymes used to make the steroid-based LH and FSH.
• target anti-Mullerian hormone, blocking maturation of follicles in the ovaries. (Anti-Mullerian hormone steers the dual sets of reproductive organs in the early fetus towards maleness.)
• block the protein parts of receptors on the zona pellucida, the layer on eggs that sperm must bind. Sperm would bang up against the egg like people shut out of a sold-out show.

Other targets include molecules that help sperm mature and swim, and others that enable an embryo to nestle into the uterus.

Gene therapy isn’t the only biotech route to pet contraception. Gene silencing might work too, by blocking the expression of key reproduction genes.

Like all biotechnologies, gene silencing approaches are based on (1) the complementary base-pairing rules that govern the process of DNA in the nucleus encoding the messenger RNAs that are translated into specific proteins in the cytoplasm and (2) the universality of the genetic code. That is, all species read the same amino acids from the same DNA/RNA triplets.

• CRISPR and its forerunners zinc finger nucleases and TALENs.
• Morphilinos, which are synthetic RNAs 25 bases long plus an organic group. Morpholinos are the basis of the drug Exondys 51 (eteplirsen), FDA-approved in 2016 to treat Duchenne muscular dystrophy. It blocks a gene part that must be spliced out for the encoded protein to function.
• RNA interference (RNAi) using short (or small) interfering double-stranded RNAs (siRNAs) to block gene expression. siRNAs were discovered in plants and then worms, but may be manufactured for clinical targets such as receptors on cancer cells. Experiments using synthetic siRNAs to target cells in the cat hypothalamus to induce permanent sterility are underway.
• MicroRNAs, which are 21 or 22 bases long, exist naturally in cells, and control gene expression when they bind specific sets of mRNAs and block their translation into protein.

Practical Matters to a Genetic Approach to Pet Contraception

The market for vectored contraception would be huge, with estimates of 200 million stray dogs worldwide, the corresponding numbers of the more-independent felines certainly greater. Implementation would require trapping (I won’t venture into the pros and cons of trap-neuter-return here). But a quick intramuscular injection would be much faster and simpler than spaying and neutering.

A bigger issue that vectored contraception might face is negative public perception of any genetic alteration. Witness the decades-long backlash against GMO foods and more recent fears of CRISPR gene and genome editing run amok. But biotechnologies have been evolving from fear to acceptance for decades, from the recombinant DNA era of the 1970s, through in vitro fertilization and GMOs in the 1980s, to genome sequencing and gene therapies from the 1990s and beyond. I hope that vectored contraception can find a place in veterinary medicine to help control pet populations.

This post appeared first at my DNA Science for Public Library of Science.