“The Power” – A Dystopian Novel That Turns Misogyny On Its Head, With a Little Help from Genetics 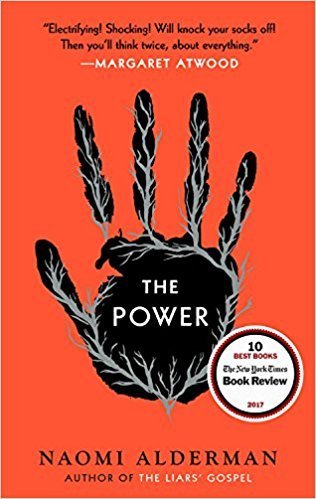 I was thrilled to see Naomi Alderman’s dystopian masterpiece, The Power," top Barack Obama’s list of his favorite books of 2017. OK, the #1 is because the list is alphabetical – but still.

The multi-layered tale flips misogynistic practices culled from history – from killing female newborns, to rampant rape, to the merely maddening restrictions on driving, education, and working. One example of the turnaround: “curbing,” the ritualistic burning of selected nerve endings in the penis as a boy nears puberty.

The ending is a twist even better than that of the original Planet of the Apes.

“Electrifying! Shocking! Will knock your socks off! Then you’ll think twice, about everything!” shouts Margaret Atwood of a< href="http://www.imdb.com/title/tt5834204/">The Handmaid’s Tale fame, on the cover.

The saga of an inverted battle of the sexes was published October 10, 2017, just five days following the first salvo against Harvey Weinstein, in the New York Times. Writers dream of synchronicity like that! Alderman’s mirror image to Gilead of Handmaid’s Tale burst into literary life against the backdrop of “me too.” Yet two months later, paradoxically, some women still cast votes for men who at one time routinely used sexual threats and violence. (White women voted for Roy Moore rather than Doug Jones nearly 2:1.) Even the book’s title nails it. It’s all about power.

Much as I loved The Power, the science is, well, underdeveloped. It starts with an intriguing premise but then becoming mired in confusion between genetics (inheriting genes) and epigenetics (environmental influences on gene expression). It’s a common oversimplification in news reports that claim a particular effect is genetic (a
Be the first to comment