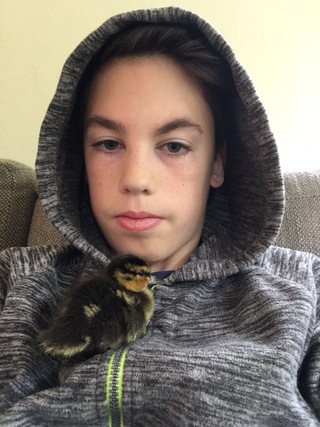 Sequencing Vincent’s exome – the protein-encoding part of the genome – could reveal if a new mutation had arisen in him, rather than having been inherited from his parents. And that’s what happened. Vincent has his own dominant mutation in a gene called RPS23. He isn’t, however, defined by any disease. He’s a striking, active, and happy young teen who loves watching and listening to birds as he rides his mountain bike to school through a nature reserve.

Marc had begun searching for a genetic explanation for Vincent’s traits on October 16, 2014, when he sent an email to a few investigators – and me, having read my blog DNA Science at Public Library of Science. His story intrigued me, and I told Vincent’s tale in
The Journal of the American Medical Association and in Rare Disease Report.

RPS23 encodes a protein that’s part of the ribosomes, key components of the machinery that enables cells to produce proteins. Marc was co-author of the paper announcing the mutation identification in the American Journal of Human Genetics in March of this year.

But the you-know-what hit the fan when Online Mendelian Inheritance in Man – “OMIM,” the compendium of conditions that is the ultimate genetic resource – then listed Vincent’s traits as “MacInnes syndrome,” named for Alyson MacInnes, the last name on the paper after several equal co-authors. That’s conventional for OMIM. The entry also described a 5-year-old girl with the mutation and some of Vincent’s traits – Marc had found her in September 2015 by registering Vincent’s mutation at GeneMatcher.

Marc objected to “MacInnes,” claiming the focus shouldn’t be on a researcher. He was more concerned about “syndrome,” feeling stigmatization. A nasty argument ensued, which Marc asked me to write about but I was chicken. Fortunately, Retraction Watch wasn’t, and their companion articles,
“Fearing “stigmatization,” patient’s father seeks retraction of paper on rare genetic mutation” and “Genetic disorder gets name change, but patient’s father still not happy”, detail the back-and-forth among the genetics journal (where Marc tried to get the article retracted), OMIM, Marc, and two researchers.

When the dust finally settled, OMIM collected the three symptoms that the two kids shared and renamed it “brachycephaly, trichomegaly, and developmental delay” (flat back of head, long gorgeous eyelashes).

Marc is ok with that, for now. “But it’s premature to name something which is not described well yet in a larger group of patients. The most helpful, informative and respectful way to name a disease is to try to explain in the name what is going on (like ribosomopathy), explain one of the biggest burden(s) of the disease (like developmental delay), and use a humane and non-stigmatizing name. Every organization that names diseases should embrace the WHO guidelines,” he told me.

In May 2015, the WHO issued guidance in naming new infectious diseases “to minimize unnecessary negative effects on nations, economies and people.”

Explained Keiji Fukuda, Assistant Director-General for Health Security at the organization, “We’ve seen certain disease names provoke a backlash against members of particular religious or ethnic communities, create unjustified barriers to travel, commerce and trade, and trigger needless slaughtering of food animals. This can have serious consequences for peoples’ lives and livelihoods.”

With the speed of communication these days, it’s important to appropriately name a new disease before an offensive tag can get around. According to WHO, a new infectious disease name should
• describe the symptoms (toxic shock syndrome)
• use adjectives (winter vomiting disease)
• include known pathogen names (HIV-AIDS)

Apparently not everyone in the world of epidemiology has gotten the WHO memo, because of the new Powassan virus encephalitis.

The winner for worst disease name of all time was GRID, for gay-related immune deficiency, which was stamped on dying young gay men in the early 1980s, before AIDS emerged in other groups. A nicely descriptive name with a hint of history is malaria, from mid 18th century Italian. ‘Bad air’ (mal aria) referred to stinky marshland, once thought to be the source of the sickness and not mosquitoes carrying parasites.

THE END OF EPONYMS

WHO rejects eponyms, like Chagas disease. The anti-eponym movement infiltrated normal physiology too, and in my textbooks Fallopian tubes gave way to uterine tubes, the loop of Henle to the loop of the nephron, and most disturbing of all, the islets of Langerhans to the pancreatic islets. I also had to change a bunch of “disorders” to “diseases,” but that’s another story, one of political correctness.

I rather like some of the eponymous names of genetic diseases, for they evoke fascinating history. For example, “horse-and-buggy doctor” George Sumner Huntington first described the disease that would take his name in 1872. As a young man he’d accompanied his father and grandfather on house calls in East Hampton, Long Island, where a few local families moved in mysterious ways. He wrote about two very thin women gripped by constant contortions, and several men who staggered about as if intoxicated. The symptoms intensified “until the hapless sufferer is but a quivering wreck of his former self.”

But colorful names are not always useful, especially for genetic diseases. Rather, precision is the most important criterion, because of the predictability of risk for people related in a certain way, based on Mendel’s laws of inheritance. Vincent’s children, for example, will each have a 50 percent chance of inheriting his features, if they turn out to be due to the mutation.

Another eponymous disease that is technically chromosomal, not genetic, illustrates the importance of precision in a diagnosis: Down syndrome.

THE TWO TYPES OF DOWN SYNDROME

In 1866, Sir John Langdon Haydon Down noted that about 10% of his patients at a facility for the profoundly intellectually disabled had distinctive flat faces that resembled those of people from Mongolia. But “mongolism” has nothing to do with ancestry. It’s due to errant distribution of chromosome # 21. (Chromosomes are numbered in decreasing size order. Due to a long-ago error, the smallest is actually #21, not 22).

The other 4% of Down syndrome cases arise from a parent who is a translocation carrier. She or he has one normal chromosome 21, but the other piggybacks onto a different chromosome, usually #14. If the unusual chromosome ends up in an egg or sperm, along with two normal copies, and conception results, the fertilized ovum has an overload of chromosome 21. And that equals Down syndrome .

OMIM has been aptly called the bible of human genetics. From the 1960s until the mid 1980s, it was a huge book published anew every few years – I had several volumes. Each entry was everything you could ever want to know about a particular condition, including historical anecdotes, epidemiological data, and for many rare conditions, descriptions of societies in which uncle-niece and cousin-cousin marriages amplify the incidence of particular mutations.

A recent article by University of Adelaide science historian Rachel Ankeny explores the “geneticization” of OMIM: the association of health effects, symptoms, traits, and biochemical findings with specific gene variants. She argues and I can also attest that the geneticization isn’t a consequence of the ability to sequence human genomes, but of a steadily growing body of discoveries, described one gene at a time, that’s been ongoing for decades.

A shout-out of thanks to Marc Pieterse for bringing the importance of a disease name to public attention. The discussion over how to name the possible manifestations of his son’s rare mutation underscores the fact that decisions shouldn’t bow to political correctness, honor a discoverer or place of discovery, but impart the most useful medical information.