Octopuses, Squid, and Cuttlefish: RNA Editing Instead of Genome Evolution? 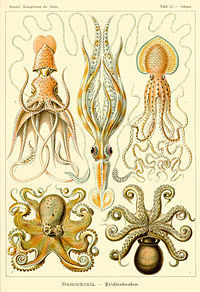 It isn’t surprising that the intelligent alien life forms that communicate with Amy Adams’ linguistics professor character Louise Banks in last year’s film Arrival resemble octopuses minus an arm. Octopuses and their close cousins the squid and cuttlefish are legendary for their intelligence and sophisticated behaviors. The septapods of film fame eject their ink in patterns to converse with their human friend.

Although we don’t know much about these curious creatures, called coleoids, they’ve inspired much fiction, from Herman Melville’s Moby Dick, to Jules Verne’s 20,000 Leagues Under the Sea, to Harry Potter and the Lord of the Rings. The coleoids and the nautiloids, with whom they shared an ancestor about 530 million years ago, are members of the class of mollusks called cephalopods.

The coleoids might be invertebrates, but they are hardly blobs. Octopuses, of which there are 300 species, are famous for building shelters from coconuts, manipulating objects much as we do tools, hunting, hiding, escaping from tanks, observing and learning, remembering, and famously deploying their inky camouflage to evade predators. Their brains are extensive and complex, organized into lobes. And the squid is famous in neurobiology circles for its giant axons.

A paper just published in Cell highlights another intriguing characteristic of the coleoids: their ability to “edit” some of their RNA, which changes proteins faster than can DNA mutation. In contrast RNA editing in mammals is not only unusual, but confined mostly to non-protein-encoding RNAs. In the coleoids, an enzyme changes “A” (adenine) RNA bases into “I” (inosine) bases, which results in a G (guanine) replacing an A.

COMPARING COLEOIDS TO US

Biophysicist Eli Eisenberg from Tel Aviv University, neurobiologist Joshua Rosenthal of the Marine Biological Laboratory and colleagues considered two species of octopus (including Octopus bimaculoides aka the California two-spot octopus, named for its two strikingly blue eye spots, which had its genome sequence published in 2015), the common cuttlefish, and a squid. The extensive RNA editing was not seen in their distant relative the chambered nautilus, nor in the even more distantly related California sea hare. "This shows that high levels of RNA editing is not generally a molluscan thing; it's an invention of the coleoid cephalopods," Rosenthal says.

While only a few dozen of a human’s 20,000 or so genes are edited, more than half of the similar number of protein-encoding genes in coleoids are edited. “With these cephalopods, this is not the exception. This is the rule. The rule is that most of the proteins are being edited,” says Eisenberg. That’s 60% of coleoid mRNAs compared to less than 1% of ours.

The four species shared 1146 edits in 443 proteins – meaning that some of the mRNAs have multiple edits. Most of the edits alter the corresponding amino acid, which means that they affect traits and can therefore have an effect on natural selection, which drives much of evolution.

The RNA edits in the octopus, squid, and cuttlefish are meaningful. In the California two-spot octopus, 11-13% of the RNA edits to neural tissues change the amino acid, compared to less than 1% of RNA edits in mammals. And many edits affect proteins called protocadherins, which are important in controlling neural circuits, and in proteins that promote nerve cell excitability.

IS A RIGID GENOME A TRADE-OFF FOR FLEXIBLE RNA?

I was relieved when the researchers called the peculiarly protein-centric RNA editing of the coleoids an enigma, because I couldn’t figure out why these particular animals do this, unless they indeed came from another world. But hints of the importance of their RNA edits lie in the flanking genome regions.

These 200-base-long “windows around recoding sites” are essential for the editing enzymes to work. There areas form a double-stranded RNA “superstructure,” and if a mutation disrupts it, RNA editing can’t happen and the organism can’t survive to pass on the ability. And so, over evolutionary time, the DNA sequences that encode the “windows” haven’t changed. In essence, genome rigidity ensures RNA editing flexibility. The windows occupy 25-41% of the entire exome, the protein-encoding part of the genome.

Why would the octopuses, squids, and cuttlefish have a route to changing their proteins other than DNA mutation? Why intervene at the RNA stage rather than the DNA stage?

In a general sense, more than one solution to a physiological challenge is not impossible, Rosenthal points out, mentioning the giant squid axons that speed nerve conduction velocity compared to the glial cells that insulate our own neurons. Neurotransmission speeds either way.

In a more specific sense, RNA editing provides a faster way to “try out” slightly different protein shapes and functions. As a result, the genomes of these species show signs of actually evolving slowly compared to other organisms. But that doesn’t matter if RNA editing facilitates change.

Eisenberg lists possible advantages to RNA editing over conventional DNA mutations. “Editing could occur selectively, at specific tissues or conditions; editing could be partial, with only a fraction of the reads edited, resulting in coexistence of both edited and non-edited forms; or multiple editing sites could provide combinatorial complexity, with the number of variants growing exponentially with the number of sites in a transcript.”

"In order to maintain this flexibility to edit RNA, the coleoids have had to give up the ability to evolve in the surrounding regions - a lot," Rosenthal says. He’s speaking figuratively of course -- the animals do not consciously decide to edit their RNA instead of mutating their DNA.

The next step if the researchers can keep their subjects from escaping their tanks? Perhaps assigning specific RNA edits to skills. "When do they turn it on, and under what environmental influences? It could be something as simple as temperature changes or as complicated as experience, a form of memory," Rosenthal asks.

I wonder if the heptapods communicating with Amy Adams edit their RNA.