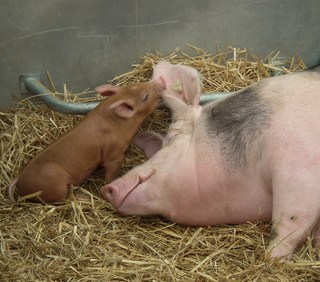 When Medscape asked me late last week to cover the making of early embryos that have cells from pigs and humans, I couldn’t help but flash back to the Pigman episode of Seinfeld. "The government's been experimenting with pig-men since the '50s!" warned a terrified Kramer after finding one such creature hidden on the top floor of a hospital.

We didn't see Kramer’s porcine/human chimera of the 1990s, but a 1960 episode of the Twilight Zone, The Eye of the Beholder, provides an earlier illustration of the mixing of the species.

Young Janet Tyler has just had her eleventh and final treatment to correct the "pitiful twisted lump of flesh" that is her head. The concerned doctor and nurse confer in great distress, their faces always hidden. Finally, Janet’s bandages are slowly peeled away, revealing that her horror persists – she still looks just like us. Then doctor and nurse turn, ever so slowly. The shadows lift and we see that they are – pig people! Standing tall but with unmistakable piggy faces. The unfortunate Janet Tyler is shipped off to live with others of her kind.

A MODEL ORGANISM
Pigs have been very useful in medical research because their organs are about the same size as ours, and some of their organ systems quite similar, such as the heart and blood vessels. They're similar genetically too, which is why some people with type 1 diabetes who are allergic to cow insulin used pig insulin prior to the human version that became available in 1980, thanks to recombinant DNA technology.

My favorite medical pig was 15-week-old, 118-pound Sweetie Pie. In 1997 the blood of Robert Pennington, a 19-year-old suffering from acute liver failure and desperately needing a transplant, circulated through her liver for six and a half hours, when a human organ became available.

Sweetie Pie was no ordinary pig. Her cells had been genetically modified to display a human protein that controls rejection of tissue transplanted from another species (a xenotransplant). She was transgenic, the human gene stitched into each of her cells.
Because of this bit of added humanity, plus immunosuppressant drugs, Pennington’s body tolerated the pig liver’s help for the few crucial hours.

When German physician Emmerich Ullman desperately had attempted a similar experiment in 1902, attaching the blood vessels of a patient dying of kidney failure to those of a pig by her bedside, the patient’s immune system rejected the help almost instantaneously.

Pigs are versatile donors of biological materials. For years we’ve fashioned valves from their cardiac muscle. Some news reports seem to stall at the organ level, however. Widespread reporting of pig bladders being somehow turned into skeletal muscle in people really referred to use of extracellular matrix extracellular matrix from pig bladders – that’s the stuff, mostly collagen, between cells. It was more a chemical fix than a whole organ affair, the sort of goop that might be used cosmetically to fill in wrinkles.

PERVs AND POOP
In 2015, George Church of Harvard and colleagues reported an important step in creating transplantable pig parts. They deployed CRISPR-Cas9 genome editing to rid pig kidney cells growing in culture of the PERVs (porcine endogenous retroviruses) that reside at 62 spots in the genome, paving the way for xenotransplantation. The fear was that the PERVs would “jump” into our genomes, although this hasn’t happened in patients who’ve received implants of pig tissue. That, too, continues to be misreported as editing 62 genes -- it was 62 copies of the same DNA sequence.

GM pigs have uses beyond the clinic. Consider their excrement. The animals don’t make the enzyme phytase, needed to extract phosphorus from a compound in cereal grains in their feed called phytate. So they’re given dietary phosphorus supplements. But they excrete the excess element, which washes into natural waters, depleting oxygen, contributing to fish kills and algal blooms, and even promoting the greenhouse effect. Enter EnviropigTM, genetically modified to secrete bacterial phytase, controlled by a mouse promoter, in its saliva. The transgenic pig digests up to 75% of the phosphorus in the grain, rendering their feces more environmentally friendly.

PIG-HUMAN CHIMERIC EMBRYOS
What if instead of festooning pig cells with human proteins and then harvesting their organs, we use the animals to incubate human organs? A first step was what Medscape asked me to write about last week, on work published in Cell.

The effort was led by Juan Carlos Izpisua Belmonte and Jun Wu from the Salk Institute for Biological Studies, with funding from Spain. (NIH is not on board with this sort of research.)

The way that researchers get organs from one species to gestate within another is quite brilliant. It’s called “interspecies blastocyst complementation.” At least two research teams have already grown rat pancreases in mouse embryos.

Although “embryo” may conjure an image of a tiny, bent, humanoid form, the approach uses the blastocyst stage, when the embryo is a hollow ball with a smidgeon of cells on the interior face constituting the inner cell mass that will grow, fold, and layer itself into the embryo proper. Species #1 – say the mouse – provides the blastocyst, but as a fertilized ovum it had a gene edited out that makes it unable to make a specific body part (the Pdx1 gene needed to knit a pancreas). Next, researchers inject pluripotent stem cells from species #2. Some of those cells burrow into the inner cell mass and become part of it, eventually dividing and differentiating appropriately to form the organ that species #1 can’t make.

And so mice grew rat pancreases. The mice didn’t develop diabetes, attesting to the functioning of the organs, and some even lived a normal lifespan. Pretty cool.

The new work repeated the mouse/rat feat with other body parts (heart and eye). Next they tried to coax rat cells to grow as part of pig embryos, but that didn’t work. A rat and a pig are just too different. What about a pig and a human? Are we as similar, genetically and evolutionarily speaking, as mice and rats?

For a second set of experiments that would venture further into the implantation-in-the-uterus stage, the researchers settled on pig embryos. I thought it was just easier to picture a human liver floating about in a pig than in a cow, what with all those bovine stomachs in the way, but actually pigs made the cut over cows because they have more offspring at a time and their organs are a more human-like size.

Even though the experiments only went on for four weeks, and not many pig embryos picked up glowing human cells, it worked! Human cells will join pig embryos. Will editing out selected pig genes and supplying human cells fill in missing body parts, like the rat pancreases growing in mice?

Getting those human cells into the pig embryos wasn't simple. The researchers injected 3 to 10 human cells into each of 2,181 pig embryos and transferred 2,075 of the embryos in batches of 30 to 50 into 41 sows. From day 21 through 28, the 18 pregnant pigs had 186 embryos harvested, 67 of which fluoresced in a variety of places. But 50 of the 67 were puny. So it isn’t perfect – but a good start to growing human organs in pigs.

SHOULD WE DO IT?
It was great fun to follow media coverage of the research, and a relief to read about pigs for a change rather than politicians. The CNN was terrific. Yet the pigman embryos seem to have flown under the radar of the Center for Genetics and Society, which lately seems stalled at so-called 3-parent embryos.

NPR tackled the issue with “In search for cures scientists create embryos that are both animal and human,” then repeated the "animal and human" mantra, apparently unaware that humans are, in fact, animals and not fungi, plants, or single-celled. But the NPR report brought up a good point: what if the experiments work too well, and a whole mess of human cells takes up residence in a pig embryo? Try it enough times and it just might happen.

Could the technology produce a true chimera, something more extreme than a few glowing cells? Although NPR uses the word “chimera” as if it is scientific jargon, a chimera is in fact a fire-breathing monster with parts from different animals, from Greek mythology. Woody Allen’s character in Sleeper, Miles Monroe, described a modern chimera upon awakening in the distant future: “Are there any strange animals that I should know about here? Anything weird and futuristic, like with the body of a crab and the head of a social worker?”

Could the same animal from which we obtain bacon and pulled pork also harbor a liver or kidney that would end up in a person?

Could the technique unleash a pigman, like Kramer saw on Seinfeld? Would it be a pig head on a human form as in the Twilight Zone or vice versa? A pig with a human brain?

Could a human baby grow inside a pig?

Given that more than 30,000 organ transplants are performed each year in the US and 22 people die each day awaiting one, and that careful genetic modification could restrict and engineer the chimeric embryo, I think we should give “interspecies blastocyst complementation” to tackle the human organ shortage a shot.