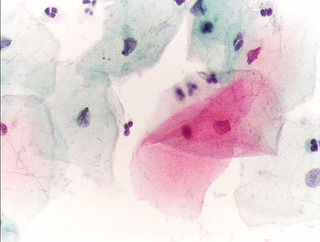 The amazing placenta literally links generations, and if findings reported in the new Science Translational Medicine are validated, prenatal genetic screening and testing may become possible using Pap smears – as early as 5 weeks after conception.

The placenta and extra-embryonic membranes (like the amnion) develop from early cells called trophoblasts. Because all of these structures descend from the fertilized ovum, they are genetically identical – and that makes them excellent stand-ins for fetal cells in prenatal testing.

Quick biology lesson: The first inklings of the placenta-to-be appear near the end of the first week of prenatal development. An initial round of rapid cell divisions yields a mulberry-like ball of cells that hollows out into a blastocyst. With further divisions, a smidgeon of cells forms on the inside face. This inner cell mass, after much elaboration and folding, becomes the embryo. The cells that form the outside of the hollow ball are the trophoblasts, which after much more cell division unfurl into the placenta and extra-embryonic membranes.

Like a white-water rafter, the blastocyst travels down a fallopian tube, landing in the uterus and nestling into the bloody lining. Then tiny finger-like projections – the chorionic villi – extrude from the blastocyst into the lining, just as the lining rises up to envelope the ball of cells. Once implanted, the blastocyst secretes human chorionic gonadotropin (hCG), which maintains the rich lining and also provides a target for pregnancy test kits.

Implantation signals a cascade of hormonal action that knits cells from the membranes surrounding the embryo with cells from the woman’s body into the gloriously vascular placenta. The pancake-like organ not only anchors the embryo and fetus, but provides nutrients, removes wastes, and exchanges carbon dioxide for oxygen.

For reasons that elude me, placenta parts are added to various products, like skin goop. Here’s an ad for one from sheep. Attempts to include placenta in cosmetics date from the 1940s. Today several variations-on-the-theme claim to boost the effects of hair conditioners. But FDA frowns upon injections of placental extracts.

Some people keep their children’s placentas, or even eat them. Ick.

The idea to tap supportive structures for clues to fetal genetic health goes back to a 1971 case report of correctly identifying 10 fetuses as male by finding Y chromosomes in chorionic villi pieces collected from the cervix. It’s not a new idea.

The big three prenatal tests are amniocentesis (sampling cells from the amnion and shed from the fetus), chorionic villus sampling (CVS), and the newer tests of cell-free “fetal” DNA in a pregnant woman’s bloodstream, aka the unfortunately-acronymed NIPS (noninvasive prenatal screening).

One product refers to the cells being tested, in its information to patients, as “their child,” and on the information for physicians, “fetal DNA.” Neither is technically correct. All of these procedures actually detect mutations or DNA sequence (including chromosome) imbalances in placental cells – which can create a seeming situation of a false negative or positive when a mutation occurs in a placental cell but not a true fetal cell, or vice versa (placental mosaicism).

The trio of tests has two major drawbacks: invasiveness and not providing enough material until well into the first trimester. Amnio starts at 12 weeks post-conception, CVS at 9, and cell-free testing at 8. (Why do MDs date pregnancies from the last menstrual period, tacking on two weeks?)

Another challenge is collecting material. Placentas aren’t easy to reach, and appropriate cells or DNA are diluted in seas of maternal material. In fact, the “fetal fraction” lurking in a pregnant woman’s bloodstream is only 4 to 10% of all the DNA pieces.

Fortunately, another source of fetal surrogate DNA is both obvious and simple to collect: the venerable Pap smear.

A BRIEF HISTORY OF THE PAP

For the 49% of the population who have not experienced a Pap smear, here’s a description: it feels a little like a carefully-executed nose pick, a gentle scraping of the wall of an anatomical structure, in the region near the part recently referred to by a presidential candidate with a word starting with “p” that isn’t Pap.

The Pap smear is widely considered the #1 cancer-screening tool ever invented. George Nicholas Papanicolaou, MD, PhD, began the research that would lead to the eponymous test at Cornell University Medical School in New York City in 1920, focusing on normal changes in cells shed from the cervix. Inevitably, he saw cancer cells, and published his idea to diagnosis uterine cancer via a smear in 1928. Validation took more than a decade, culminating in the seminal book, "Diagnosis of Uterine Cancer by the Vaginal Smear", published in 1943. It is an “atlas” of smears from more than 3,000 women.

Pap smears quickly became a key part of gynecological exams. Here’s a just-released update from the American Congress of Obstetricians and Gynecologists.

In this week’s report, Sascha Drewlo, Randall Armant, Chandni Jain (first author) and colleagues at Wayne State University School of Medicine describe a technique to mine Pap smears for telltale trophoblasts and the DNA within.

They separate the cells by labeling them with magnetic nanoparticles coupled to mouse antibodies that bind HLA-G, one of the human leukocyte antigen cell-surface markers that’s unique to trophoblasts and placental cells. Add a magnet to separate the cells, wash off the strands of clinging maternal DNA, then break the cells open and collect nearly-pure fetal-DNA surrogates.

The team developed the strategy, called TRIC for “trophoblast retrieval isolation from the cervix”, to track abnormalities of the placenta that could lead to complications such as small-for-gestational-age newborns and preeclampsia. It was described earlier this year in Scientific Reports.

To approximate full-genome coverage, the new experiment looked at 94 single nucleotide variants (SNVs) and 59 short tandem repeats (STRs, like the ones used in forensics) that collectively cover the 24 human chromosome types.

The study is a proof-of-principle, considering 20 consecutive cases. Still, all 20 fetuses were correctly identified and distinguished both from the woman’s DNA and late placental DNA, used as a control.

Prenatal genetic screening via Pap smear offers several distinct advantages:
• It can be performed as early as 5 weeks.
• A Pap smear takes seconds, a fast swish, scrape, and smear, compared to a needle to the middle (amnio), a snipping through the vag (CVS), or even the simple blood test from the arm (NIPS).
• Obesity doesn’t affect accuracy, as it does for the existing 3 technologies.
• The fetal fraction is a whopping 92%, making the test likely more accurate, or at least meaningful in a greater percentage of cases.

I wonder what effect this new potential entrant into the prenatal genetic screening arena will have on the NIPS companies currently battling for market share, like Harmony and MaterniT.

I do love those names. I propose “Papoose” for Pap prenatal genetic screening.

What it's eventually called, the new approach is brilliant in its simplicity, not to mention building on an existing and ubiquitous platform with which nearly all women are already comfortable. All that’s needed are the numbers.

The collection component is validated, we all know how magnets work, and it’s easy to see how testing for SNVs, which are common, parallels testing for disease-causing point (single nucleotide) mutations, which are rare, just as testing for STRs represents insertions, deletions, and duplications.

Finally, papoose is ideal for genetic screening, which means investigating a large, general population, such as all pregnant women, who are at average risk. Yet it's also easier for genetic testing, which targets high-risk groups, such as women over age 35 or with a family history of a detectable genetic or chromosomal condition. And of course entire exomes and genomes can be sequenced from the genomes in Pap smears.

Whatever the eventual product is called, it is an exquisite example of the power of teaming technologies – old and new.

This post first appeared at my Public Library of Science blog DNA Science and in a more technical take at Medscape.