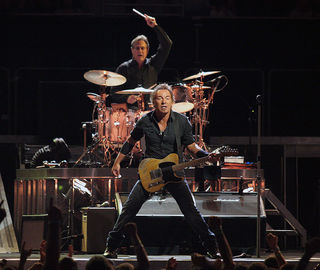 Please help Michael meet the Boss
Last March, my husband Larry and I attended the annual gala for the Curing Retinal Blindness Foundation, near Philadelphia. During the cocktail hour, someone was singing at the piano, “Born to Run.” I turned to Larry.

Michael Smedley did. Blindness hasn’t stopped the then 15-year-old from being a musician, an actor, and an athlete. He’s a vocalist and keyboard player for the band Casual Friday.

But it isn’t easy.

“Michael cannot see sheet music, so he listens to songs and can pick out the instrument he’ll play and memorize that part. He’s working with digital music programs to compose music through his keyboard and computer,” says his mom, Kristin. Here is a compilation of Michael doing Born to Run.

Michael and his younger brother Mitchell have a form of Leber congenital amaurosis (LCA) caused by mutation in a gene called CRB1. A different form of LCA is likely to be the first FDA-approved gene therapy in the US, perhaps even later this year. As I watched and listened to Michael last year, I stood next to Jean Bennett, MD, PhD, the superstar scientist who heads up the clinical trial for the gene therapy and may one day tackle the Smedley family’s disease.

A TRIFECTA OF ROCK KINGS: BILLY, BRUCE, and BRYAN

For Michael’s 16th birthday, Kristin and her husband Mike set themselves an incredible goal. Here it is in her own words:

“One of Michael’s all time favorite artists is Billy Joel. Back in November I found out that Madison Square Garden was adding a Billy Joel show in February. I immediately wrote to a wonderful foundation I learned about when I attended the National Organization for Rare Disorders Summit back in the Fall. This organization, Do It For The Love Foundation (DIFTL), connects kids living with challenges to their dream concert experience, so I applied to have them connect Michael to Billy Joel. A few weeks ago I got the great news: DIFTL is sending Michael to the concert – and they have back stage passes for him as well!

No sooner was that dream experience confirmed, another favorite artist of Michael’s, Bruce Springsteen, announced that he was adding a Philly show to his “The River Tour”. The Springsteen concert is at the Wells Fargo Center on the Friday night before Billy Joel. Wait… there’s more. Another one of Michael’s favorite artists is Bryan Adams…. and he is performing at a new venue in Philly, The Fillmore, on Monday right after the Billy Joel date! In a four-day stretch, all three will be in or near our hometown. To top it all off: that weekend is also a four day weekend for our school district, so Michael is off from school on Friday and Monday.

The epic plan: Take Michael to all three concerts! Instead of shopping for cars and comparing auto insurance plans, my husband and I have been working out logistics of getting him to three different venues in four days’ time. It wasn’t easy, but it is so worth it – you can imagine how overwhelmingly excited he was to find out this great news on the eve of his sixteenth birthday… and he has been blaring all three artists’ albums for days, with a nonstop, ear to ear smile the whole time!”

MICHAEL'S DREAMS AND VISIONS
It’s said that people missing one sense compensate with others. I’ve seen that among the families I’ve met since writing my book about gene therapy for blindness. Some of their visually impaired kids are amazingly gifted musicians.

Please, anyone with any connection to the Boss, make Michael Smedley’s dream come true. Contact Kristin through any of the links, or through me.

Michael will only be able to hear Bruce this time, but someday, thanks to gene therapy, I believe he will really see him.

(PS The River Tour is amazing!)