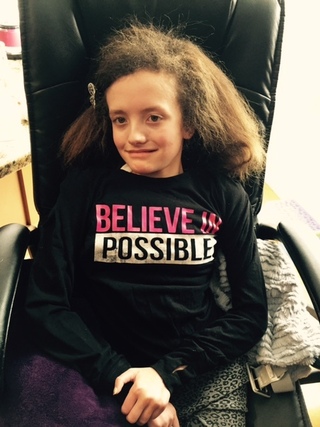 Hannah Sames will have gene therapy in March, after an 8-year effort from her family. Go Hannah!
Eleven-year-old Hannah Sames can still curl her toes, just barely. But time is running out.

If Hannah can move her toes for a few more weeks, until she becomes the fourth child in a clinical trial for gene transfer to treat giant axonal neuropathy (GAN), the disease might halt – she may even regain function, as mice did.

The first sign that something was amiss in the motor neurons that extend from Hannah’s spinal cord down towards her toes was an oddly hesitant gait as a toddler. A “diagnostic odyssey” finally told Lori and Matt Sames in 2008 that their little girl had an ultra-rare condition, with no treatment, that’s fatal within two decades. The devastated parents immediately formed Hannah’s Hope Fund (HHF), which has nearly entirely funded the trial at the NIH Clinical Center. Steven Gray, PhD, from the University of North Carolina and his colleagues, developed the protocol.

I've chronicled Hannah's journey and the start of the clinical trial nearly a year ago.
CBS National News covered the story in October.

During those years, Hannah’s abilities have waned. At the annual 5 kilometer Run for Life that HHF holds every August, the little girl has gone from pushing a doll’s stroller to stay upright, to a walker, to a wheelchair. But Hannah’s spirit hasn’t diminished. She sings the Star Spangled Banner to start every race, although this year she had to keep quiet for an hour beforehand so her voice would last through the song. It did, with a little help from Lori near the end.

My daughter and I walked the race with Hannah last August, and just as I admonished Carly for wanting to cheat by cutting across a field, Hannah pointed to it and blurted, “What would happen if we went there?” She led the way, zipping across the field in her motorized wheelchair.

DELIVERING THE GENE
The GAN gene transfer is the first into the spinal cord, and so it could pave the way for treatment for other conditions, such as amyotrophic lateral sclerosis. The gene encodes a protein called gigaxonin, which aligns the girder-like intermediate filaments that fill certain types of cells.

The axon of a healthy motor neuron is filled with neat, parallel assemblies of filaments, like logs forming rafts in a river. Hannah’s axons in cross section instead resemble logjams. Ultimately, the bloated nerve cells die and muscles no longer receive signals to contract.

In the procedure, adeno-associated viruses carry functional gigaxonin genes into the roots of motor neurons in the spinal cord, entering the nuclei and enabling the cells to produce the missing protein. Hannah wasn’t patient #1 because she has two deletion mutations – her cells do not make any gigaxonin at all. Suddenly flooding her system with the protein, foreign to her body, could have spiked a deadly immune response. Fortunately, standard immunosuppressant drugs prevent such a reaction.

Phase 1 of the clinical trial is assessing safety of one dose in an initial 4 to 6 patients, not more because the loaded viral vectors are expensive and time-consuming to produce. Secondary outcomes peek at efficacy. Is gigaxonin in the spinal fluid? Does a biopsy sample of a peripheral nerve near the thumb have the protein? Has the child improved? What happens to the virus? Follow-up will continue for 15 years.

Participant #3 and Hannah will receive higher doses than the first patient, Chrissie (a girl), who was treated at the end of May and the second, Gillian (a boy), treated this past fall. Gillian's mom calls his treatment "the golden injection." Patient #3 will receive the genes in his spine this month, and Hannah 6 weeks after that – just after her twelfth birthday. Chrissie and Gillian received about 35 trillion viral vectors carrying the healthy gene, but patient #3 and Hannah will receive triple that dose. Trial details are here.

A RACE AGAINST TIME

Hannah doesn’t seem as excited about the coming treatment as Lori does, perhaps because she’s so accustomed to medical attention. “She knows Chrissie and Gillian have been injected. She’s not screaming and saying ‘I’m losing function, why is it taking so long?’ She’s 11. She just adapts,” says Lori.

The Sames family has worked tirelessly to maintain Hannah’s mobility and function, and it is paying off. She only uses the motorized wheelchair at school, for example. At home she uses a gait trainer, which is like a walker with a hoist that can bear weight. “We carry her around, and with every transition -- kitchen to bathroom, living room to kitchen -- we have her stand up and bear weight, and have her move to different surfaces. She doesn’t sit in a chair all day. She bears her weight at least every 2 hours during the day, which has helped her stay stronger. She makes no gigaxonin protein and she’s going to turn 12 and she can walk 10 feet with an adult supporting her under each arm. That’s something!” Hannah is upright in Facebook vacation photos with her parents and two older sisters, Madison and Reagan.

She tires more easily at school now, and often leaves early for physical therapy. But the PT has been vital in preparing Hannah for gene therapy. Lori releases a litany of daily exercises: lung and tongue, fingers and toes. “We fold them all into every day. It’s a full time job.”

Lori tells other parents of the importance of PT. “Keep the toes moving! I put a finger around Hannah’s toes and she curls and squeezes them. If I hadn’t been doing this since she was 3 thanks to what a physical therapist showed me, she wouldn’t still be able to move her toes. The fact that she can do so means that her innervating muscle fibers are still vital. Maybe the ends of those axons haven’t died yet, and they’re just dysfunctional.”

But time is running out. “She is right on the brink! She can barely move her toes. Even two weeks makes a difference. If the IRB (institutional review board) would say she could go four weeks after patient #3 rather than six weeks, even that would be miraculous. It’s getting right down to the wire,” says this remarkable woman who has served as a nexus in the rare disease community, inspiring many others to channel the angst from a terrible diagnosis into researching and funding treatments.

A self-taught scientist who can dazzle physicians with her knowledge, Lori Sames is first author on a recent paper that urges cooperation between rare disease communities in developing drugs. She’s even thinking past the initial gene therapy to preventing optic nerve degeneration, “riding the coattails” of already successful ocular gene therapies “If patients with GAN lived longer, they’d be blind. Hannah’s optic nerves began lightening by age 7, and we know from preclinical studies that the gene therapy is not going to hit the optic nerve enough to have an impact,” she said.

Lori tries not to dwell on the seven very long years that it took for healthy gigaxonin genes to be gently placed into the first brave child’s spinal cord. She isn’t at liberty to discuss results so far. But it looks like 2016 will indeed be “Hannah’s year.” Said Lori, “It’s finally going to happen!”

(my book The Forever Fix: Gene Therapy and the Boy Who Saved It, is about gene therapy for a form of blindness that is likely to be the first gene therapy approved in the U.S., includes two chapters about Hannah).

This post first appeared at my weekly blog at Public Library of Science,
Be the first to comment